“Now and Then” Showdown in NBA Live 14 Ultimate Team 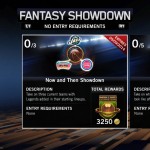 Even with NBA Live 15 right around the corner, new content continues to be added to NBA Live 14. The “Now and Then” Showdown challenge is now available in Ultimate Team, pitting you against three current teams that feature NBA Legends with boosted ratings. The teams are the Detroit Pistons, San Antonio Spurs, and Utah Jazz, and the Showdown expires on September 9th.

As previously mentioned, NBA Live 14 has quietly received a few content updates recently that have had an impact on gameplay, while new rosters featuring offseason movement – and presumably this year’s rookie crop as well – are also in the works, and should be coming through soon.

If you’re still playing NBA Live 14, feel free to join in the discussion here in the Forum. You can also find the latest NBA Live 15 news and previews here, and talk about this year’s game here.