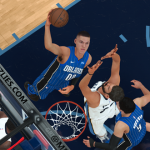 Patch 1.05 has come through for the PlayStation 4 version of NBA 2K18. It will be downloaded automatically as long as you have an active Internet connection, so if it isn’t showing up, try restarting your console. The patches for the PC, Xbox One, and Nintendo Switch versions of NBA 2K18 are slated to be coming through “soon”. I’ll update this post as those patches are released; please see below for further bulletins.

The patch includes some authenticity updates, including fixed jerseys for the Clippers, Spurs, Magic, and 2008 Hornets, and new player action photos. Various bugs and issues have been addressed across gameplay and game modes, including problematic layups for tall players, shooting foul frequency, an assortment of hangs in specific situations, incorrect VC balances, missing accessories, free agency logic, and more.

Please see below for the full patch notes. Additionally, as per Mike Wang, one fix that was apparently left out of the patch notes is an adjustment to shooter fatigue. This has been done to combat the infamous zig-zag exploit, penalising players for over-dribbling. This is certainly welcome news in terms of balancing the online experience in NBA 2K18.

As always, feel free to share your thoughts on the latest patch in the comments section below, as well as in this topic in the NBA 2K18 section of the NLSC Forum. You can also find a complete update history for NBA 2K18 here in our Wiki.

UPDATE #1: The patch is now available for the Xbox One version of NBA 2K18.

UPDATE #2: The patch is now available for the PC version of NBA 2K18.