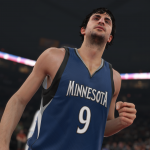 The third official patch is now available for the PlayStation 4 version of NBA 2K15. The PC and Xbox One versions of the game should also be receiving it shortly.

Patch #3 updates artwork (including faces, jerseys, and referee uniforms), addresses some crashing issues and other bugs, adds support for vibration and 21:9 resolutions to the PC version, removes various exploits and gameplay quirks, improves responsiveness, and tweaks a few aspects of the AI. The patch also addresses a variety of issues in MyGM, MyLEAGUE, and MyCAREER.

Please see below for the full list of patch notes. Feel free to add your thoughts on the latest patch in the comments below, and join in the discussion here in the NLSC Forum.