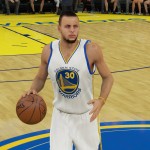 After teasing some NBA 2K16 news yesterday on Twitter, 2K has announced today via their social media pages that NBA 2K16 will be released on September 29th, 2015. However, customers who pre-order the game will be able to play it on September 25th – four days early – with 2K dubbing it an “Early Tip-Off Weekend”.

Gamers who pre-order NBA 2K16 will also receive in-game bonuses in the form of 10,000 Virtual Currency, and MyTEAM VIP. According to Chris Smoove, MyTEAM VIP is comprised of bonus packs for MyTEAM, such as gold and emerald booster packs. Thanks to samardzicnba for the heads up on that.

What are your thoughts on NBA 2K16’s pre-order bonuses? Are they enough to encourage you to pre-order NBA 2K16? Sound off in the comments below, and join in the discussion in this thread in our Forum!

Is that available in Europe too?

May have to pay out the few extra ££ for the digital ps4 copy instead of the hard copy this year then!