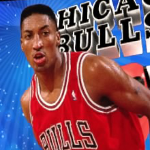 He was always a player I had an admiration for, but I can’t say I was ever a huge fan of Scottie Pippen. Like pretty much everyone else that grew up in the 90’s, my earliest memories of the NBA were of the Chicago Bulls dominating everyone in their path. And while it is hard to argue against the fact that Scottie Pippen played a big part in that, the Bulls, and basketball in general, were synonymous with a guy he played with…and I’m not talking about Dickey Simpkins. While just about every conversation about the NBA could include Michael Jordan, this article is dedicated to the one night on MyTeam where it was all about Scottie Pippen.

Two weeks ago, I decided to play Historic Domination. I had three games to complete: the ’89 Bulls, the West All-Stars and the Historic Stars. The first game I played was against the West All-Stars. After yet another handsome victory to my death squad, I opened up the reward packs. The player I drew was ’91 Scottie Pippen. After my initial surprise and joy, I looked through my collection to add Scottie to my squad; but much like the ’98 Toni Kukoc card I drew (twice), it wasn’t there. This led me to start a thread in the Forum, which surprisingly still hasn’t got any responses (I thought it was at least as important as the “sweat issue”). Thankfully this problem was recently addressed. When I realised I couldn’t put Scottie in my lineup, I decided to get on with it. My next game was against the ’89 Chicago Bulls. Even though they’re ranked a paltry tenth in Historic Domination (lower than the ’96 Sonics for some reason), I only managed to collect one star off them from all my attempts. It might be because it’s hard to shoot a decent percentage against Michael and Scottie, or maybe the fact that Michael posterises you every time he gets to the rim. In any case, I managed to get another resounding win, which led to unlocking the ’89 Bulls reward packs.

I wasn’t optimistic about drawing a high-rated card. I saw that I had a Bronze, a Gold and a Silver card the player pack. I was resigned to drawing Will Purdue or Brad Sellers. After getting no player during the Bronze and Gold pick up, I upgraded my expectations to Bill Cartwright or Craig Hodges. Surely enough, I drew a 79-rated Scottie Pippen with my Silver card. With three stars left to unlock Amethyst Scottie Pippen, it was all getting a little strange… but I decided to take it as a sign that I needed to attempt to complete the mode right then and there. Since it took me several attempts to get three stars against the ’89 Bulls, I thought I would never pass the Historic Stars, since it required 890 MT points to complete. However, it took only one attempt to complete, thanks to an Amethyst Jason Kidd and an ever-reliable Gold Tim Duncan.

Within the three MyTeam games I played last Sunday, I earned three Scottie Pippen cards. That surely doesn’t happen very often with anyone, letalone one of the top fifty basketball players of all time. Now all I need is ’00 Blazers Scottie Pippen.

I’ve yet to pick up Pippen in MyTEAM or Ultimate Team, so I’m a little jealous. 😉

He’s definitely a great player to have available, particularly on defence. I’ve heard commentators say that LeBron is amazing because he can guard all five positions and that they can’t think of players before him that did it; but I always think “ummmm… the Bulls had two of those guys back in the 90’s (Scottie and Dennis).”

How quickly they forget! Rodman probably spent a bit more time guarding centres than Pip did, but still, he did have that versatility.