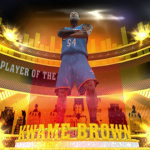 The Soapbox is a feature where NLSC community members can let their voices be heard on a range of topics related to basketball and basketball video games through feature articles here on the main site. Today’s guest contributor is Kenny, formerly known as badreligionau in the NLSC Forum.

The Washington Wizards had the first pick of the 2001 NBA Draft. They had some players with great potential to choose from, including Tyson Chandler, Shane Battier and Eddy Curry. But instead, they chose Kwame Brown; the first player ever to be selected with the first overall pick directly out of high school.

He seemed like a solid pick. He won the Mr Georgia Basketball award, was Glynn Academy’s all-time leading rebounder and shot blocker, and was selected for the McDonalds All-American team in 2001. But as six teams in eleven seasons would find out, the expectations placed on Kwame far exceeded his talent. Indiscretions both on and off the court have marred his career and contributed to his label as one of the biggest draft busts the NBA has seen.

Now in his twelfth season, there are no expectations on Kwame Brown, except to be a bench warmer for the Philadelphia 76ers; a team struggling to be a relevant force in the weakest conference. So what better player to start with in NBA 2k13’s Creating a Legend mode than Kwame?

Sure, some people might like to pick a player who still has great potential, like Kyrie Irving, or perhaps even John Wall. But for my first attempt at this mode, I wanted someone who I had room to fail with. Someone whose playing time would be sporadic, since I don’t always have the time to play thirty or more minutes a game.

The mode started off as planned. The minutes I received with Kwame were limited. I was fumbling around with the controls and making a lot of mistakes. If you’re about realism in NBA games, but you lack the experience in this type of game mode, I’d suggest starting with a player like Kwame; it really does feel like an authentic experience straight off the bat. As I got better, the minutes started to increase. Again, this is a fairly realistic scenario in the sense that players often get rewarded with minutes after displaying improvement. But on the other hand, it’s improbable when you look at it in the context of Kwame’s career. How much could he actually improve now he’s past his prime?

After playing through a season with the Sixers, I decided to decline the final year option on his contract and opt for free agency. With eight teams to choose from (including the Sixers), I decided to choose the Oklahoma City Thunder; a team that has great star power, but lack in the position that Kwame could fill. This provided an opportunity to get his career back on track and possibly find him a niche within a team contending for the title.

The result was Kwame’s best season ever. For only the second time in his career, he averaged double-digits in points per game and won the sixth man award for being the most proficient player coming off the bench. Towards the end of the season, I claimed the starting spot off incumbent centre Kendrick Perkins; a big achievement considering Kwame started the season behind Perkins, Collison and Thabeet in the centre rotation. This mode adds another point of view to an already excellent NBA simulation game. While the Association mode gives the user the point of view of the General Manager and allows them to control a team, Creating a Legend allows them to have complete control over their favourite player in the league; whether it’d be what team they’re playing for, or how they negotiate contracts. The contracts negotiated affect how the player progresses, as the currency earned is experience points, which can spent on additional skill points, signature skills, player animations and different brand shoes.

As a long-time fan of the NBA, a really satisfying feature is the ability to work on specific skills with Hall of Famers such as Hakeem Olajuwon, Bill Russell and John Stockton, just to name a few. One tip I will give to PC gamers is if you’re doing these drills, get a gamepad with analogue sticks, as there are certain moves you can’t pull off with the arrow keys on your keyboard.

Creating a Legend also has great replay ability, as you can select any player in the league with any type of role. You can play as a star that can pull off miraculous dunks, a guy who anchors his team’s defence, or someone who gives his team energy off the bench. You can choose someone at the beginning, prime or end of their career. There are so many possible scenarios and different combinations in this mode that before you try them all out, NBA 2K14 will probably be on the shelves, with hopefully an even better Creating a Legend mode. The enjoyment one receives from this mode will be reliant on how committed they are to having the simulation experience. With any simulation video game, there are going to be a few inaccuracies, such as inflated statistics, both for individuals and teams. There are also some teams in the mode that can overachieve, or even underachieve compared to their real life counterpart. An example I saw of this was the Brooklyn Nets eliminating the defending champion Miami Heat in the first round of the 2013 NBA Playoffs. Considering the Miami is the league’s best team – and had a 27 game winning streak earlier in the season – this is an improbable result to say least. Added to this, my first round matchup was against the Toronto Raptors, who in real life were closer to the lottery than the post-season.

These inaccuracies however haven’t taken anything away from my enjoyment of the mode. I’m into my third season now with Kwame and even though I won a championship in the 2014 Playoffs, there’s still a sense of excitement in anticipating what the next big accomplishment could be. Perhaps an All-Star Game or a season MVP is on the cards. Who knows; I guess I’ll just have to keep playing.

Be sure to check out Kenny’s Dynasty story thread, The Next Level, in the Stories section of the NLSC Forum. If you’d like to contribute an article for The Soapbox, please see this thread for more details.