Spotlighting Our Stories Section; Join in the Fun! 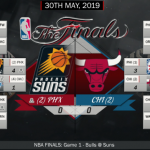 The Stories section in the NLSC Forum isn’t as popular as it once was, in part due to changing demographics and basketball gaming habits. However, there has been some renewed interest in sharing franchise and career mode stories in recent months. To that end, I’d like to spotlight some of the tales that are currently being told on the virtual hardwood.

With NBA Live 19 and NBA 2K19 on the horizon, I hope that we can see further activity in our Stories section. As our interviews with various members of the community hopefully demonstrate, a lot of people have had fun sharing their franchise and career experiences with their fellow basketball gamers over the years, and it’d be great to see that trend return.

Whether it’s through written recaps or video content, franchise or career modes, a new game or old, I invite everyone to join in the fun! In the meantime, be sure to check out the aforementioned stories, the other active topics, and of course, the Story Hall of Fame for both NBA Live and NBA 2K.

Thanks Andrew. Nice to see an article like this. It’s been fun reliving and compiling retro basketball.

You’re welcome! With more activity in that section as of late, it felt like a good time to shine a spotlight on it, and encourage more people to join in, either by telling stories or following along with other people’s topics.