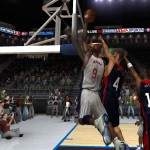 As we’re getting to the end of March, I thought I’d give everyone another status report on the 2012/2013 roster updates for NBA Live 2005, NBA Live 06, NBA Live 07 and NBA Live 08. Right now, everything is on track and things are looking good for a release by the end of this week. Yes, at long last!

Right now, everyone who needs to be in the roster is in the roster, all teams including the All-Stars and Rising Stars Challenge squads have been updated and it’s just a matter of updating the lineups for all 30 NBA teams to be as recent as possible when the roster is finalised, compiled and released. Right now I’m updating ratings and salaries, placing art files and polishing a few things up to complete the update for NBA Live 08. After that, I’ll complete the conversions for NBA Live 2005-07 and everything will be ready to go.

Thank you again to everyone for your patience. These rosters are coming out much later than I anticipated and would’ve liked, but your support and the fantastic work of the art patchers in our community has encouraged me to get them done. A huge thanks once again to everyone who has contributed art for the new rosters, it is very much appreciated. As I mentioned in my previous status report, I don’t know whether I’ll be continuing the rosters next season but I’m hoping that this release will be worth the wait. For those who missed the previous post, the new rosters will contain a bonus in the form of updated Team USA, Dream Team and Dream Team III rosters, all with correct jerseys.

Once again, look out for the new rosters to be available by the end of the week. In the meantime, I’ll probably release a couple of smaller updates including new versions of Real Staff 13.

Thank you so much, we appreciate it alot.

thank you so much. 😀

Andrew,thank you for your great job

Thanks all for the kind words, encouragement and support. 🙂

thank you so much 🙂 we appreciate it alot. .much love