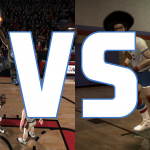 This is Wayback Wednesday, your midweek blast from the past! In this feature, we dig into the archives, look back at the history of basketball gaming, and indulge in some nostalgia. Check in every Wednesday for retrospectives and other features on older versions of NBA Live, NBA 2K, and old school basketball video games in general. You’ll also find old NLSC editorials re-published with added commentary, and other flashback content. This week, I’m comparing the NBA Jam series to the NBA Street series.

It’s been over a year since I posted my first “Versus” feature, which compared The Jordan Challenge and NBA’s Greatest. My intention was for it to become a recurring feature, similar to my Familiar Faces in Strange Places/Familiar Places series. To that end, I’ve been sitting on a few ideas for other comparisons. Since I compared two modes in back-to-back releases in the same series for the first instalment, it only makes sense to go bigger for the second article. As such, today I’m comparing the two heavyweights of the arcade basketball scene: NBA Jam, and NBA Street.

There are many factors to consider here. There have been more NBA Jam games than NBA Street games, as well as a number of releases that were spiritual successors to NBA Jam under different titles, after Acclaim acquired the name from Midway. To that point, three different developers have released games under the NBA Jam brand, while every NBA Street game has come from EA Sports BIG. Nevertheless, I believe that all of the evidence must be considered, as we compare, contrast, and ultimately pick the winner out of these classic arcade hoops series. Let’s take a look back…way back…

END_OF_DOCUMENT_TOKEN_TO_BE_REPLACED

The Friday Five: 5 Most Significant Years in Basketball Gaming

Welcome to this week’s edition of The Friday Five! The Friday Five is a feature that I post every Friday in which I give my thoughts on a topic that’s related to NBA Live, NBA 2K, and other basketball video games, as well as the real NBA, and other areas of interest to our community. The feature is presented as either a list of five items, or in the form of a Top 5 countdown. This week’s Five lists what I feel are the five most significant years in the history of basketball gaming.

2019 is upon us, and as always, I’m hoping that it’ll end up being a fantastic year for basketball gaming! Hopefully, we’ll be able to get a lot of enjoyment out of the 2018 releases for the next eight or nine months, and then get our hands on even better titles to close out the year. While the success of basketball games ultimately rests with their respective developers, we shouldn’t underestimate the impact that we can have as a community. As such, it’s important that we speak up with constructive feedback, so that we can do our part in making 2019 a big year on the virtual hardwood.

There have been quite a few milestone years for basketball video games over the past three decades. They’ve marked significant improvements within the genre, through the release of many memorable games that have gone down as classics. Of course, there are also years that have been significant in terms of basketball gaming for far less positive reasons. As we tip off a new year and hope for the best when it comes to the future of basketball gaming, I feel there’s value in looking back at the road that hoops games have travelled. After all, it’s essential that forthcoming games not only build upon the success of their predecessors, but also avoid some of their pitfalls.

END_OF_DOCUMENT_TOKEN_TO_BE_REPLACED 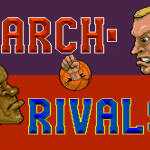