Wayback Wednesday: The Saga of DJ in NBA 2K18 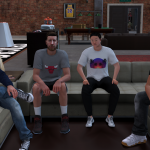 This is Wayback Wednesday, your midweek blast from the past! In this feature, we dig into the archives, look back at the history of basketball gaming, and indulge in some nostalgia. Check in every Wednesday for retrospectives and other features on older versions of NBA Live, NBA 2K, and old school basketball video games in general. You’ll also find old NLSC editorials re-published with added commentary, and other flashback content. This week, I’m taking a look back at the saga of DJ, as told by the MyCAREER story in NBA 2K18.

I know, I know. I’ve talked about the story in NBA 2K18’s MyCAREER a lot, from running jokes on the NLSC Podcast to discussing my issues with it as part of my article on the game’s legacy. However, there’s something really fascinating about it; if nothing else, it provides so many examples of what not to do with the story-driven approach to MyCAREER. Since I’ve already taken a look back at “Livin’ Da Dream” and the tale of Orange Juice, and will no doubt reflect on the stories of AI and Che at some point, it’s only fair to give DJ one more moment in the spotlight.

There’s another reason why it’s worth looking back at NBA 2K18’s MyCAREER story featuring DJ. With the servers being shut down earlier this year, it’s no longer possible to play a connected MyCAREER save, and unlike in previous games, that renders the story completely inaccessible. For better or worse – and spoiler alert, but I’d definitely say it was for the worse – the saga of DJ proved to be a turning point for the mode. Let’s take a look back…way back…