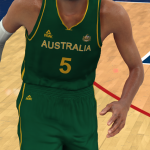 This is Wayback Wednesday, your midweek blast from the past! In this feature, we dig into the archives, look back at the history of basketball gaming, and indulge in some nostalgia. Check in every Wednesday for retrospectives and other features on older versions of NBA Live, NBA 2K, and old school basketball video games in general. You’ll also find old NLSC editorials re-published with added commentary, and other flashback content. This week, I’m taking a look back at the history of Aussies in basketball games.

If you listen to the NLSC Podcast or pay close attention to the way I spell certain words, you’ll know that I’m an Aussie. Being a basketball fan in Australia hasn’t always been easy, even with the NBA’s explosion in popularity in the 90s, as well as the heyday of our own local league, the NBL. Sadly, the sport hasn’t always had the most favourable reputation with many of my fellow Aussies. While those of us who love hoops do so passionately, it’s always battled cricket, tennis, and at least three different codes of football (rugby, Australian Rules, and soccer) for popularity.

I’ve always felt that our struggles on the world stage have contributed to the game’s up-and-down popularity down under. The Boomers are yet to win an Olympic medal, but just this past week, they scored a huge win over the USA in the second exhibition game played in Melbourne; the first time they’ve ever defeated the US. It helps that we have a few more Aussies in the NBA these days, which also means that we see them on the virtual hardwood. In honour of the Boomers’ big win, I’m reflecting on the history of Aussies in basketball games. Let’s take a look back…way back…