Monday Tip-Off: MyPLAYER in the Middle 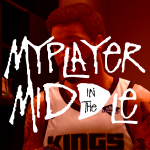 We’re at midcourt, and the ball is about to go up…it’s Monday Tip-Off! Start your week here at the NLSC with a feature that’s dedicated to opinions, commentary, and other fun stuff related to NBA Live, NBA 2K, and other basketball video games. This week, I’m tipping things off with a recap of my experiences playing MyCAREER in NBA 2K20 with a MyPLAYER that’s a centre rather than a point guard. As a side note, please be forewarned that I use the Australian spelling of “centre” throughout this article.

My time playing MyCAREER regularly in NBA 2K20 has come to an end. After I ended up being drawn back into the mode, I finished a full season with my traditional point guard build, winning the championship and setting an assortment of records. The MyPLAYER build I chose has also proven to be suitable for online play, and while the online experience is as hit-and-miss as ever in NBA 2K20, when it has been good, I’ve really enjoyed playing my usual role. After starting the second season by averaging a quadruple-double, I’m going to try simming my way to the Hall of Fame.

That’s not the only experiment I’m running in MyCAREER, though. Although I do want to put the mode aside, I have created a second player. I’ve enjoyed being a point guard since being thrust into the role back in NBA 2K13, and have learned the meta-gaming idiosyncrasies for my preferred build at that position. It’s helped me rack up assists, which I’ve come to really enjoy doing. However, when I was playing in my local junior league many years ago, I was a centre that loved to rebound and block shots. I decided to create a MyPLAYER that reflected my actual playing style and position, in order to see what MyCAREER is like as the man in the middle.