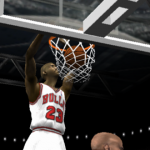 This is Wayback Wednesday, your midweek blast from the past! In this feature, we dig into the archives, look back at the history of basketball gaming, and indulge in some nostalgia. Check in every Wednesday for retrospectives and other features on older versions of NBA Live, NBA 2K, and old school basketball video games in general. You’ll also find old NLSC editorials re-published with added commentary, and other flashback content. This week, I’m dusting off NBA Live 2002 to see if I can reconstruct Michael Jordan’s Chicago Bulls in Franchise Mode.

Even though it’s definitely not the pinnacle of the series, NBA Live 2002 is a game that I find myself thinking about and returning to every now and again. As I’ve mentioned before, it’s a game that I’m oddly nostalgic for, in large part because of a memorable Sacramento Kings Franchise that I finally gained closure on years later. Of course, I also had a less successful Franchise experience with the Utah Jazz, in which things got a little too wacky. As I previously remarked, if I wanted to shake things up and do something a little unusual, it might’ve been more fun to try to reconstruct Michael Jordan’s championship-winning Chicago Bulls.

It’s not too late to explore that idea, though. Just as I recreated my Kings Franchise to finish it off all these years later, I thought that it’d be fun to attempt to reconstruct the core of the Jordan-led Bulls teams. Not all of the key players from those squads are still active in NBA Live 2002, but more than a couple are available to acquire. Can it be done? Let’s take a look back…way back…