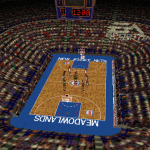 This is Wayback Wednesday, your midweek blast from the past! In this feature, we dig into the archives, look back at the history of basketball gaming, and indulge in some nostalgia. Check in every Wednesday for retrospectives and other features on older versions of NBA Live, NBA 2K, and old school basketball video games in general. You’ll also find old NLSC editorials re-published with added commentary, and other flashback content. This week, I’m taking a look back at the use of boot disks to play games on PC, in particular NBA Live 96.

Oh, I’m going wayback for this one! Way back to a time long before I worked in IT and could easily troubleshoot PC problems. Back to a time when my understanding of hardware and software was pretty decent for a ten or eleven year old, but certainly nowhere close to what it is today. We’re going back to a time when floppy disks were actually a thing, and not just an antiquated image used for the Save icon. It’s an era when computers were less powerful than the smartphones we now all carry around in our pockets, and weren’t always built for heavy duty gaming.

Today, we’re talking about boot disks. These days, boot media – generally in the form of a flash drive, as even optical discs are becoming outmoded – is still around, and is often used for installing and troubleshooting operating systems such as Windows. Back in the 90s, however, they were a way of getting games to run. Indeed, if your PC was getting a bit long in the tooth and the game was particularly demanding – at least by the standards of the time – boot disks were often the only way you’d get to play them. Let’s take a look back…way back…