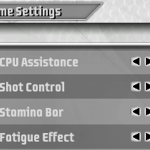 This is Wayback Wednesday, your midweek blast from the past! In this feature, we dig into the archives, look back at the history of basketball gaming, and indulge in some nostalgia. Check in every Wednesday for retrospectives and other features on older versions of NBA Live, NBA 2K, and old school basketball video games in general. You’ll also find old NLSC editorials re-published with added commentary, and other flashback content. This week, I’m taking a look back at the CPU Assistance setting found in several old basketball games.

When we look back at old basketball games, it jogs our memories in so many ways. There are the graphical and gameplay improvements that have come with evolving technology. There are the soundtracks which capture the zeitgeist of the time a game was released, whether they’re made up of original music or popular licensed songs. As I’ve discussed on many occasions, there’s the “interactive almanac” aspect of the sim games in particular, capturing a snapshot of what the league was like back then. And of course, there’s the depth, scope, and variety of the modes.

Beyond the depth and quality of modes and features though, what we find in an old basketball title is indicative of what was necessary and/or expected at the time. For example, the original approach to custom teams in the early NBA Live games was fun for the time, but seems downright quaint compared to the concept of Ultimate Team and MyTEAM. An option like Slow Motion Dunks also no longer seems necessary. In that vein, a once-common setting that we no longer see is CPU Assistance (or Computer Assist, as NBA Live originally labelled it). It’s no longer deemed to be a necessity, but it used to be quite important. Let’s take a look back…way back…