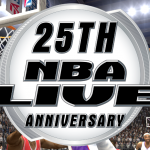 To mark the 25th Anniversary of NBA Live, we’re taking a look back at every game in the series with retrospectives and other fun content! This also includes re-running some features from our 20th Anniversary celebrations, with a few revisions. Whether you’re a long-time basketball gamer who grew up with NBA Live and are keen on taking a trip down memory lane, or you’re new to the series and want to learn about its history, we hope that you enjoy celebrating the 25th Anniversary of NBA Live here at the NLSC! Today, it’s a retrospective of NBA Live 2004.

After NBA Live 2003 leaned too much towards an arcade style of gameplay, NBA Live 2004 was a very welcome course correction. It took the strong points of its predecessor, such as Freestyle Control, and built a more robust sim game on that foundation. It was also the beginning of a very solid three year run for NBA Live on PC, PlayStation 2, and Xbox, before the series began to struggle with its transition to the next generation. NBA Live 2004 was generally very well-received in its day, and it remains a favourite for many long-time basketball gamers. It was definitely a return to form for the series, and the game most of us wished NBA Live 2003 had been.