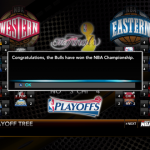 This is Wayback Wednesday, your midweek blast from the past! In this feature, we dig into the archives, look back at the history of basketball gaming, and indulge in some nostalgia. Check in every Wednesday for retrospectives and other features on older versions of NBA Live, NBA 2K, and old school basketball video games in general. You’ll also find old NLSC editorials re-published with added commentary, and other flashback content. This week, I’m using NBA 2K10 to simulate through to the current season.

It’s fair to say that the 2010 season marked a turning point for the NBA. Crossing into a new decade, it saw Kobe Bryant win the last of his five titles with the Los Angeles Lakers, as well as the final clash between the Lakers and Boston Celtics to date. It was also the season before a free agent frenzy that included LeBron James’ infamous “Decision”, and several other big names changing teams. Whether or not you like the current trend of superstars joining forces via free agency to form “super teams”, or some of the other changes over the past decade, it’s been an eventful era.

As it happened, it was also a turning point for NBA video games. NBA Live 10 was the last NBA Live game before the ill-fated rebrand to NBA Elite, making 2010 the final season to see two sim-oriented releases until NBA Live returned for the 2014 campaign. I thought it’d be fun to go back to one of those games and simulate through to the present, just to see how the sim engine would predict everything would turn out. NBA 2K10 is a game I haven’t talked about all that much outside of one article, so it’s the one I’ve settled on for this exercise. Let’s take a look back…way back…and then bring it all back to the 2018 season.