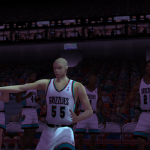 This is Wayback Wednesday, your midweek blast from the past! In this feature, we dig into the archives, look back at the history of basketball gaming, and indulge in some nostalgia. Check in every Wednesday for retrospectives and other features on older versions of NBA Live, NBA 2K, and old school basketball video games in general. You’ll also find old NLSC editorials re-published with added commentary, and other flashback content. This week, I’m reflecting on how video games mark different NBA milestones, and how it dates them.

On several occasions, I’ve mentioned that video games serve as wonderful time capsules for the NBA. They’re a snapshot of the league at the time they’re released, preserving the rosters, team branding, and the rules and formats of the era. When you revisit an old NBA video game, you’re often reminded of players’ brief and forgotten tenures with certain teams, “What If” scenarios and lineups that never lived up to the hype, and the jerseys and logos that you both loved and hated. In a way, old games can act as interactive almanacs, and are a fun way to revisit NBA history.

With that in mind, basketball video games preserve different eras and milestones in the real NBA as much as they’re a timeline of gaming and technology. In many of my Wayback Wednesday features, as well as my 25th Anniversary of NBA Live articles, I’ve reflected on how various titles have represented an evolution in the genre, and the improvements that are noticeable from year to year. On this occasion, I’m looking at how they represent NBA milestones and significant changes in the league, as well as the way those events make them dated. Let’s take a look back…way back…

END_OF_DOCUMENT_TOKEN_TO_BE_REPLACED

Episode #302 of the NLSC Podcast is out now! This week, it’s Part 2 of our celebration of the 25th Anniversary of NBA Live. Join Dee4Three and I as we cover NBA Live 07 through to NBA Live 19, look ahead to the future, and reflect on the series as a whole. If you haven’t caught Part 1 yet, be sure to tune in here!

We continue our conversation with a look back at NBA Live 07, a strong candidate for the worst game in the series. As we proceed to break down each game year by year, we reflect on the downfall of NBA Live, and the mistakes that have led to its continued struggles. We discuss what could have been, from the cut retro teams in NBA Live 08 and the full season version of Be a Pro in NBA Live 09 on PS2, to the disastrous change of direction with NBA Elite 11 and cancellation of NBA Live 13. The importance and selection criteria for cover players also comes up, and we reveal the NBA Live 13 cover player that was never officially announced. That brings us to the current generation as we recap the series’ ups and downs since returning with NBA Live 14, and how it’s looking as of NBA Live 19. Once again, we touch on what we want to see in NBA Live 21 and beyond. We wrap up with our fondest memories of NBA Live, our favourite games in the series, and thoughts on what it’s meant to us these past 25 years.

What are your memories of NBA Live 07 through NBA Live 19? What are your thoughts on the future of the series? Sound off in the comments section below, or join in the discussion here in the Forum! Additionally, feel free to hit us up with any feedback on the episode, as well as suggestions for topics that you’d like to hear us discuss in future episodes. For more information on the NLSC Podcast including episode guides, check out this page in our Wiki.