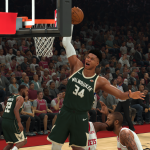 We’re at midcourt, and the ball is about to go up…it’s Monday Tip-Off! Start your week here at the NLSC with a feature that’s dedicated to opinions, commentary, and other fun stuff related to NBA Live, NBA 2K, and other basketball video games. This week, I’m tipping things off with some thoughts on the changing face and identity of the NBA 2K series in recent years.

Back in early May, I noticed a Tweet from Brian Mazique, in which he responded to the suggestion that NBA Live should be free to play as a way to win people back as they try to return to prominence. He described NBA Live as being irrelevant, noting that when it comes to NBA 2K, Visual Concepts and Take-Two are looking at games like Fortnite and Call of Duty as the competition and sources of ideas for engagement. It may sound harsh, and there are a lot of people who want to see NBA Live succeed and would be willing to make the switch if it did, but it’s an apt statement.

In fact, it’s apt on two counts. Gaining relevance and market share is obviously one of the challenges facing NBA Live, and that’s something I’ve previously discussed here in Monday Tip-Off. However, Brian is also quite right that with NBA 2K becoming a fixture in pop culture, and in some ways transcending its genre, its peers are popular games like Fortnite and the Call of Duty series. That’s a great position for NBA 2K to be in, but it’s also a troubling one for enthusiastic hoop heads. To state the obvious, those games are not basketball titles, whereas NBA 2K is. Competing with and borrowing from those games has resulted in a changing face and identity for NBA 2K.

END_OF_DOCUMENT_TOKEN_TO_BE_REPLACED 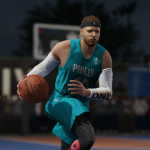 We’re at midcourt, and the ball is about to go up…it’s Monday Tip-Off! Start your week here at the NLSC with a feature that’s dedicated to opinions, commentary, and other fun stuff related to NBA Live, NBA 2K, and other basketball video games. This week, I’m tipping things off with my thoughts on how NBA Live needs to establish its identity, and deliver an experience with greater longevity.

There seems to be somewhat of a divide and a notable amount of unrest among NBA Live gamers at the moment. At a time when we should be consolidating out feedback – obligatory cheap plug for our NBA Live 20 Wishlist – there’s a lot of argument about the future of the series. Many gamers are expressing concerns and frustration, while others are arguing that we must all be supportive and, to borrow a slogan, trust the process. Both sides have a point and are coming from a good place, though I do find myself agreeing more with the former group.

That’s probably because the group that’s most frustrated tend to be gamers my age. We remember a time when NBA Live was the dominant brand in 5v5 sim-oriented NBA games, and all the things that made it successful. Needless to say, that’s led to a bit of sneering at us allegedly out of touch “old heads”; a term that’s quickly come to highlight the toxicity in today’s basketball gaming community. At the same time, it is certainly easy to get caught up in the past, and we do need to have some patience, but it’s getting tougher for a lot of NBA Live loyalists to remain patient. Ultimately, NBA Live needs to forge an appealing identity that results in longevity and a deeper game.