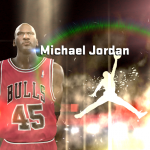 This is Wayback Wednesday, your midweek blast from the past! In this feature, we dig into the archives, look back at the history of basketball gaming, and indulge in some nostalgia. Check in every Wednesday for retrospectives and other features on older versions of NBA Live, NBA 2K, and old school basketball video games in general. You’ll also find old NLSC editorials re-published with added commentary, and other flashback content. This week, I’m marking the 25th Anniversary of the day Michael Jordan said “I’m Back”, and returned to the Chicago Bulls.

It’s funny how you don’t always feel the passage of time until you think about how long ago a certain event was. I felt it in 2008, when it had been ten years since the Chicago Bulls’ last championship. I felt it in 2011, when the Bulls celebrated the 20th Anniversary of their first title. It recently occurred to me that I’m now the same age that Michael Jordan was when he won that sixth ring in 1998. And yes, it strikes me that a whole decade has passed and hundreds of players have come and gone, as I continue to work on a current roster for NBA 2K11.

Today marks another milestone. It’s been twenty five years – or a quarter of a century, if you want to make it sound even more impressive – since Michael Jordan ended his first retirement from the NBA. MJ famously announced his return in two words: “I’m Back”. His return would ultimately expand his resume and bolster his claim to being the Greatest of All-Time, producing many more memorable moments along the way. It also had a noteworthy impact on the virtual hardwood. Let’s take a look back…way back…