END_OF_DOCUMENT_TOKEN_TO_BE_REPLACED

Monday Tip-Off: The Next Big Innovation in Basketball Games 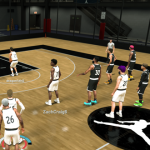 We’re at midcourt, and the ball is about to go up…it’s Monday Tip-Off! Start your week here at the NLSC with a feature that’s dedicated to opinions, commentary, and other fun stuff related to NBA Live, NBA 2K, and other basketball video games. This week, I’m tipping things off with a few thoughts on what the next big innovation in basketball games might be.

June is upon us, which means we’re drawing closer and closer to the beginning of a new preview season for NBA Live and NBA 2K. A few rumours are already starting to swirl, and it hopefully won’t be too long before we get a few teasers and tidbits to sink our teeth into. In the meantime, we’re left to speculate, and talk about what we want to see in this year’s games. I’m hoping that NBA Live 20 will prove to be a big step forward for EA Sports’ series; conversely, I expect NBA 2K20 to be another fine release, though I am hoping it won’t mark a return to NBA 2K18’s greedy approach.

A new console generation also looms, so beyond this year’s releases, I’ve begun to wonder about what the future holds for basketball games. Apart from concerns about the direction (and whether I’ve started to slip out of the core audience), I’ve also been wondering about the next step in terms of innovation. After all, we’ve already seen the games become more and more realistic, incorporate a variety of deep modes, and provide new experiences through online play. New hardware will naturally facilitate a jump in graphics and animations, but as far as features are concerned, what else can be done to innovate on the virtual hardwood?