Episode #340 of the NLSC Podcast is out now! Derek (aka Dee4Three) and I are your hosts for this week’s show.

Gamers just wanna have fun, but NBA 2K21 has presented a few obstacles in that regard. Issues with the Mamba Forever edition pre-order bonuses have caused PlayStation 4 and Xbox One gamers much grief. The frosty reception to NBA 2K21 has also resulted in record-low Metacritic scores from critic and user reviews alike, and some trolling tags have appeared on the game’s Steam store page. We discuss some of the snarkier comments and whether it undermines efforts to provide constructive feedback, as well as the toxicity of elitist thinking. In the wake of the shooting hotfix, we also share further impressions following a full week with NBA 2K21, including our latest thoughts on shooting, player movement, gameplay balance, and other core aspects. We also circle back to last week’s news about Scott O’Gallagher and Rob Jones, and consider the impact on the NBA 2K series moving forward. 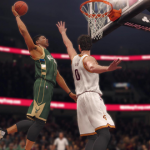 We’re at midcourt, and the ball is about to go up…it’s Monday Tip-Off! Start your week here at the NLSC with a feature that’s dedicated to opinions, commentary, and other fun stuff related to NBA Live, NBA 2K, and other basketball video games. This week, I’m tipping things off with a few thoughts on Metacritic scores, and how they relate to basketball games.

We’re less than three weeks away from the release of NBA Live 18 and NBA 2K18. It won’t be long before publications are getting their hands on the finished games, and vying to be the first to post their reviews. The most glowing reviews will be shared by the games’ official social media accounts, while we basketball gamers discuss the merits of each reviewer’s critique. At the end of the day, however, their approval or disapproval of each game will contribute to their respective Metacritic scores. Like all developers, both EA Sports and Visual Concepts will be hoping for the best result possible, as Metacritic scores are the yardstick for successful releases.

Generally speaking, that’s an understandable approach. While there can certainly be a disconnect between the opinions of professional reviewers and the general public, along with sales, Metacritic scores are a reasonable barometer for a game’s success. At the same time, when it comes to basketball games, and sports games in general for that matter, I’d argue that they’re not always accurate or fair. I’m not a huge fan of awarding numerical scores to games of any genre, and as far as basketball games are concerned, the extent to which the importance of Metacritic scores can be overblown is comparable to the overemphasis on overall ratings in the games themselves.