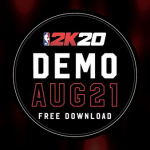 The NBA 2K20 Demo has been released! As previously announced, it’s available on PlayStation 4, Xbox One, and Nintendo Switch. The demo will not be available on Steam, but the PC version will have all the same features that are being previewed. Please note that 2K has advised that it may take up to an hour for it to download and install. If you don’t see the demo in your console’s store, try restarting.

This year’s demo allows gamers to get a head start with the new MyPLAYER Builder. It provides an opportunity to check out the preset builds, as well as all the tools for creating a custom Archetype. We’re also able to test out our MyPLAYER’s potential, and see how they will perform at different levels of Overall Ratings.

The MyNBA2K20 companion app, featuring the Golden State Warriors’ D’Angelo Russell as its cover player, is also available for Android and iOS devices. Now that the demo has been released, it can be used to scan your face for use with your MyPLAYER. It also includes the usual Card Battle mode, and methods of earning VC in the full version of NBA 2K20 once it’s released.

What are your thoughts on the NBA 2K20 Demo? Have your say in the comments section below, as well as join in the discussion here in the NLSC Forum!