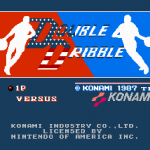 I’m long overdue to do another video retrospective for Wayback Wednesday, and a recent incident involving Family Guy inspired me to cover a game that’s been on my list for a while: Double Dribble, for the Nintendo Entertainment System. Double Dribble is a game by Konami that a lot of you have probably heard of, and it’s a hoops title that I wanted as a kid, but never actually played until many years later. Having played the game since as an adult, I certainly have a few thoughts on it that I’d like to share with my fellow basketball gamers. Since it’s recently come up in gaming news and been thrust back into the public eye, now seems like an opportune time.

It’s a significant basketball video game in its own right, one that’s worth revisiting if only for its memorable animated dunking cutscenes. With that said, let’s take a look back…way back…

Catch the retrospective here on our YouTube channel if you can’t see the embedded video. Making another video retrospective has certainly got me in the mood to get back to creating them, so stay tuned for further video content, as well as other Wayback Wednesday features, coming your way every week here at the NLSC!