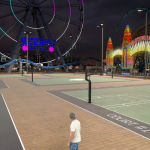 This is Wayback Wednesday, your midweek blast from the past! In this feature, we dig into the archives, look back at the history of basketball gaming, and indulge in some nostalgia. Check in every Wednesday for retrospectives and other features on older versions of NBA Live, NBA 2K, and old school basketball video games in general. You’ll also find old NLSC editorials re-published with added commentary, and other flashback content. This week, I’m taking a look back at the affiliations in MyPARK.

The Playground has never been my main mode of choice – Pro-Am is more my speed when it comes to NBA 2K online – but I’ve had some fun with it over the years. More to the point, it has become one of the most popular modes in the game, and through the introduction of The Neighborhood, a major part of the main MyCAREER hub. From its introduction as The Park in NBA 2K14 to its rebranding as MyPARK and subsequently The Playground, the mode has gone from an online offshoot of NBA 2K’s career mode to its own fully fleshed out and immersive experience.

As much focus as it receives and as popular as it is, however, not all Playground gamers are completely satisfied with its evolution. One aspect that was left behind in the MyPARK era is affiliations. It’s not uncommon to see Playground gamers asking for the return of MyPARK affiliations in response to 2K’s Tweets, though as of NBA 2K20, it’s yet to make a return. What was it, and why was it so popular? Let’s take a look back…way back…