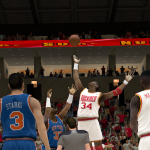 This is Wayback Wednesday, your midweek blast from the past! In this feature, we dig into the archives, look back at the history of basketball gaming, and indulge in some nostalgia. Check in every Wednesday for retrospectives and other features on older versions of NBA Live, NBA 2K, and old school basketball video games in general. You’ll also find old NLSC editorials re-published with added commentary, and other flashback content. This week, I’m reimagining NBA’s Greatest in NBA 2K12.

I had a lot of fun reimagining The Jordan Challenge back in June, so I thought I’d give the same treatment to NBA’s Greatest. As I remarked in my retrospective on NBA’s Greatest, it was a fantastic follow-up to The Jordan Challenge, and added new content to NBA 2K12 with the lockout of 2011 delaying the inclusion of the new rookies and updated rosters. The level of detail with the retro presentation was very impressive, and it’s a feature that would be really fun to have when playing with historical teams in future NBA 2K games.

However, as with The Jordan Challenge, NBA’s Greatest wasn’t perfect. Looking back, there are a few ways it could’ve been better, and teams that would’ve been preferable. As with my previous reimagining, this isn’t intended to disparage the work that Visual Concepts put into NBA’s Greatest, but rather consider what might have been if not for a few legal barriers, and how an already fantastic mode could be made even better. Let’s take a look back…way back…