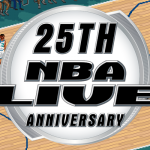 To mark the 25th Anniversary of NBA Live, we’re taking a look back at every game in the series with retrospectives and other fun content! This also includes re-running some features from our 20th Anniversary celebrations, with a few revisions. Whether you’re a long-time basketball gamer who grew up with NBA Live and are keen on taking a trip down memory lane, or you’re new to the series and want to learn about its history, we hope that you enjoy celebrating the 25th Anniversary of NBA Live here at the NLSC! Today, I’m sharing some personal recollections of NBA Live 95.

I hope you enjoyed my retrospective of NBA Live 95 that tipped off our celebration of the 25th Anniversary of NBA Live! Although I shared some personal memories of the game in my retrospective, I have a couple of other stories that I’ve saved for their own separate article. Specifically, I wanted to talk about playing NBA Live 95 for the first time on Super Nintendo, and playing a Season with the Houston Rockets with my cousin on PC. It’s the story of how I came to be a fan of the series…and also, how I engineered an unlikely comeback for Boston Celtics legend Larry Bird.