Wayback Wednesday: Players I Remember Because of Video Games 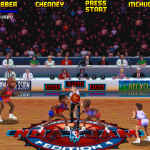 This is Wayback Wednesday, your midweek blast from the past! In this feature, we dig into the archives, look back at the history of basketball gaming, and indulge in some nostalgia. Check in every Wednesday for retrospectives and other features on older versions of NBA Live, NBA 2K, and old school basketball video games in general. You’ll also find old NLSC editorials re-published with added commentary, and other flashback content. This week, I’m taking a look back at some players that I remember because of video games.

In response to my retrospective of NBA Live 95 for our 25th Anniversary of NBA Live celebrations, our own Q noted that the game helped him form opinions about NBA players. I can certainly say that video games were one of my main resources for learning about the league and its players when I was first getting into basketball, and I know a lot of other 90s kids can say the same. I’ve wondered if that still applies to the younger gamers these days. NBA 2K’s success has unquestionably made the genre mainstream, but the Internet has also made the NBA itself more accessible than ever.

I’ve previously joked that you know you’re a long-time hardcore NBA fan when you can name benchwarmers from over a decade ago. Trading cards and video games are also a reason that I remember a lot of lesser-known players from the 90s and 2000s, and a few of them will often spring to mind thanks to the virtual hardwood. For this week’s Wayback Wednesday, I’m recalling some of those players who stuck in my mind due to their video game counterparts. Let’s take a look back…way back…