Episode #378 of the NLSC Podcast is out now! Derek (aka Dee4Three) and I are your hosts for this weekly podcast that’s all about basketball gaming.

Having sorted out our issues with Parsec, we’ve enjoyed a full week of basketball gaming. From epic clashes with video game legends in NBA Live 10 to co-op play in NBA 2K Playgrounds 2, we’ve had a lot of fun on the virtual hardwood and blacktop this week! Spotlighting recent modding developments leads to us discussing various ideas for retro rosters, as well as philosophies for rating players. We also react to the recent leaks regarding the cover players for the standard and Legend editions of NBA 2K22. In this week’s mailbag, we’re looking back at the NBA 2K21 Next Gen trailer, and discussing some interesting issues with licensing and likeness rights.

Episode #328 of the NLSC Podcast is out now! Derek (aka Dee4Three) and I are your hosts for this week’s show.

Disappointingly, but not surprisingly, NBA Live wasn’t featured at EA Play 2020. We reflect on how it’s made the community pessimistic about the series’ future. Elsewhere, the inevitable lull following NBA 2K21’s announcement trailer has tipped off this year’s rumour mill. As we’re not fans of misinformation, we analyse the rumours making the rounds, and offer up some tips to avoid falling for clickbait. The NBA 2K League also comes up when we broach the topic of online play, as does a program that’s worth checking out. In modding news, we note a couple of recent developments, and once again talk about minimalist mods. We wrap up with a discussion of a forgotten 1-on-1 tournament that the NBA held in 1972, including how such a tournament could work today. Old heads that we are, there’s also some grumbling and further push back on the whole “plumbers and dentists” rhetoric. 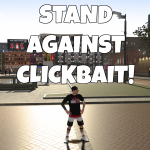 Wayback Wednesday: The Weirdest NBA Tall Tale I Ever Heard 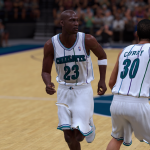 This is Wayback Wednesday, your midweek blast from the past! In this feature, we dig into the archives, look back at the history of basketball gaming, and indulge in some nostalgia. Check in every Wednesday for retrospectives and other features on older versions of NBA Live, NBA 2K, and old school basketball video games in general. You’ll also find old NLSC editorials re-published with added commentary, and other flashback content. This week, I’m reminiscing about the weirdest NBA tall tale that I ever heard as a kid back in the 90s.

Although the Internet is a place of much subjective debate when it comes to the NBA, it offers plenty of resources for looking up objective statistics, records, and other such information. That makes it more difficult to concoct rumours, and try to trick your fellow fans with tall tales. I recently remembered the weirdest tall tale that someone told me back in the 90s: that Michael Jordan was originally drafted by the Charlotte Hornets! It got me thinking about how this bizarre tall tale originated, so I’ve decided to re-tell the story using clips from NBA 2K19. Let’s take a look back…way back…

Check it out here if you can’t see the embedded video. I’m working on some more video ideas for Wayback Wednesday and other features, including a comparison of NBA Live 95 and NBA Showdown, so be sure to subscribe to the NLSC’s YouTube channel! I hope that you enjoyed this look back at a weird NBA tall tale from the 90s, as told by NBA 2K19. Has anyone ever tried to fool you with an unusual and unlikely myth about the NBA? If so, share it in the comments section below! Additionally, if there’s a game you’re particularly nostalgic for, let me know what it is, and I might profile it (or an interesting aspect of it) in a future Wayback Wednesday feature.

Episode #253 of the NLSC Podcast is out now! Join Arcane and I as we react to the gameplay videos, impressions, and other tidbits of information about NBA Live 19 that have come out of EA Play 2018. We also touch on a rumour that’s making the rounds, and once again discuss some of our hopes for this year’s game from EA Sports. 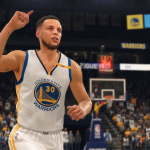 UPDATE: The official website only lists PlayStation 4 and Xbox One as the platforms, so it appears as though the rumours are false. We may look to start up another PC petition in the near future.

There are some very interesting rumours regarding NBA Live 18 making the rounds at the moment. According to Game Informer, both NBA Live 18 and Madden 18 are slated for release on PC, in addition to PlayStation 4 and Xbox One. If true, it would be the first time in ten years that either game has been released on the PC platform.

Before we all get too excited, it wouldn’t be the first time that a PC version has been erroneously listed for NBA Live following the game’s last appearance on the platform. It should be noted that EA Sports have yet to officially confirm any platforms for NBA Live 18, aside from the current generation consoles. As such, this could simply be a copy and paste error, as the platform listings for the upcoming NBA Live and Madden releases are identical to FIFA 18, a series that is currently available on PC.

Nevertheless, this is a rumour that we’ll obviously be keeping an eye on. A return to PC would definitely be welcomed by our community, especially if the game turned out to be anywhere near as moddable as the series’ previous releases for the platform. That’s obviously something we’d look into, if indeed NBA Live 18 comes out on PC.

For now, it’s probably best to take the rumour with a grain of salt, as it’s a move that seems somewhat unlikely as the NBA Live series tries to reestablish itself with the significantly larger console demographic. We’ll obviously discuss the rumour in this week’s NLSC Podcast though, and if we can get any more information on the situation, we’ll naturally be sure to pass it along. In the meantime, feel free to speculate in the comments section below, as well as in this thread in the NLSC Forum. Incidentally, if you missed the first official look at NBA Live 18, you can check it out here.