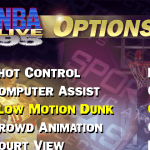 This is Wayback Wednesday, your midweek blast from the past! In this feature, we dig into the archives, look back at the history of basketball gaming, and indulge in some nostalgia. Check in every Wednesday for retrospectives and other features on older versions of NBA Live, NBA 2K, and old school basketball video games in general. You’ll also find old NLSC editorials re-published with added commentary, and other flashback content. This week, I’m taking a look back at the slow motion dunks in older versions of NBA Live.

It’s interesting to look back at the features and mechanics that were featured in old basketball video games. There’s a reason that many of them ended up being dropped over the years – especially as the sim titles aimed to be more and more realistic – but there’s still a lot of nostalgia in them. When I think back to games like NBA Live 95 and NBA Live 96, one of my fondest memories is of throwing down big dunks and having my player point at his opponent, or pumping his arm in triumph, as he runs back on defense.

In fact, I’d say that a lot of older basketball gamers remember that aspect of dunking in the early NBA Live games. A feature that made those dunks even more exciting – much as they could be with the animations of the time – was the option for slow motion dunks. It’s an outdated concept now, particularly in the era of online play, but in its day it was pretty cool. Let’s take a look back…way back…