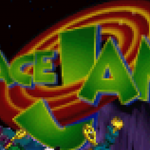 This is Wayback Wednesday, your midweek blast from the past! In this feature, we dig into the archives, look back at the history of basketball gaming, and indulge in some nostalgia. Check in every Wednesday for retrospectives and other features on older versions of NBA Live, NBA 2K, and old school basketball video games in general. You’ll also find old NLSC editorials re-published with added commentary, and other flashback content. This week, I’m taking a look back at the Space Jam video game.

Happy 58th Birthday to my all-time favourite player, Michael Jordan! You know, it kind of blows my mind that I’m now older than MJ was when he won his final title with the Chicago Bulls in 1998. Appropriately enough, that was 23 years ago; a fact that’s also difficult to wrap my head around! In any case, I figured that since it is His Airness’ birthday today, it only makes sense to cover something related to him. The problem is that I’ve already covered The Jordan Challenge (from several angles, too), as well as Michael Jordan in Flight, his history in games, and his comeback in 1995.

What else is there? Well, how about the Space Jam video game? Yes, there was a lot of merchandise related to Space Jam when it came out, and like so many movies in the 90s, there was a video game tie-in for PC, PlayStation, and Sega Saturn. I didn’t actually play it back in the day, but I’ve since added it to my collection. We got a real jam going down, so let’s take it into overtime…I mean, let’s take a look back…way back…

END_OF_DOCUMENT_TOKEN_TO_BE_REPLACED

NLSC Podcast #362: Putting the Ball in the Basket

Episode #362 of the NLSC Podcast is out now! Derek (aka Dee4Three) and I are your hosts for this weekly podcast that’s all about basketball gaming.

A bevy of retro season roster mods are being produced at the moment, which we’re excited to see. The fact that there are a couple of 2005 season mods out or in the works reminds us that time is marching on, and our nostalgia is getting old! We also have some advice for getting big projects done and released. Meanwhile, NBA 2K21 Current Gen and Next Gen have both received new patches, so we briefly discuss some of the changes. This week’s main discussion is a deep dive into shooting mechanics: the history and evolution, the best and worst concepts, and everything in between. In the latest mailbag, we discuss the forthcoming Space Jam sequel, and consider another What If scenario.

Welcome to this week’s edition of The Friday Five! The Friday Five is a feature that I post every Friday in which I give my thoughts on a topic that’s related to NBA Live, NBA 2K, and other basketball video games, as well as the real NBA, and other areas of interest to our community. The feature is presented as either a list of five items, or in the form of a Top 5 countdown. This week’s Five is a reflection on the movie Space Jam, twenty-one years after its release.

Hey, everyone who grew up in the 90s! Want to feel old? A couple of days ago, it was twenty-one years since Space Jam was released in theatres. Yes, really! Time does indeed keep on slipping into the future. In retrospect, I should’ve covered Space Jam for this week’s Wayback Wednesday, as it fell on the actual anniversary of the film’s release, November 15th. However, I completely spaced on that (no pun intended), and I’ve also wanted to revisit NBA Jam Tournament Edition for a while, so I did end up overlooking an obvious opportunity. As such, I’m making up for that with a bit of additional retro content for this week’s Friday Five.

Even if you weren’t around in 1996, chances are that you’ve seen, or at least heard of, Space Jam. The plot basically has some fun with Michael Jordan’s stint playing baseball, suggesting that he was inspired to return to the hardwood after helping Bugs Bunny and the rest of the Looney Tunes defeat a group of aliens who had stolen the talent of five NBA players: Charles Barkley, Muggsy Bogues, Larry Johnson, Patrick Ewing, and Shawn Bradley. It’s popular and silly, often criticised, and also the highest grossing basketball movie of all-time. It even spawned a video game, which is also worth talking about. So, let’s take a look back…way back…in five points.

END_OF_DOCUMENT_TOKEN_TO_BE_REPLACED

Welcome to this week’s edition of The Friday Five! The Friday Five is a feature that I post every Friday in which I give my thoughts on a topic that’s related to NBA Live, NBA 2K, and other basketball video games, as well as the real NBA, and other areas of interest to our community. The feature is presented as either a list of five items, or in the form of a Top 5 countdown. In this week’s Five, I’m offering up some more theories and alternative interpretations for the stories in MyCAREER.

It’s time once again to indulge in a bit of creative writing and fun speculation! Last November, I wrote a Friday Five that took the stories that NBA 2K has implemented in MyCAREER, and twisted them around with some theories and interpretations that somewhat altered their tone. It’s still one of my favourite articles that I’ve written, as reimagining the MyCAREER stories in a darker or more dramatic light turned out to be a fun exercise. NBA 2K18 has provided us with another story to pick apart, and I have a few more ideas, so it seems like an opportune time for a follow-up article.

Once again, I do have to stress that I don’t actually believe these interpretations and theories, even though I do feel that a couple of them actually fit quite well. In fact, if you told me that the first theory was indeed intentional and what’s actually going on, I wouldn’t be entirely surprised. This is all meant to be in fun though, so don’t take it too seriously. With that being said, you may find that a couple of these theories make a little too much sense. At the very least, I hope it’ll be an amusing read to take you into the weekend. Let’s once again go tumbling down the rabbit hole; tinfoil hats are of course welcome, but completely optional.