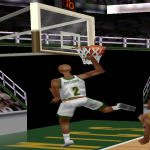 This is Wayback Wednesday, your midweek blast from the past! In this feature, we dig into the archives, look back at the history of basketball gaming, and indulge in some nostalgia. Check in every Wednesday for retrospectives and other features on older versions of NBA Live, NBA 2K, and old school basketball video games in general. You’ll also find old NLSC editorials re-published with added commentary, and other flashback content. This week, I’m taking a look back at the “cheat” that was possible using instant replay in old basketball video games.

I’ve said it so often in these Wayback Wednesday features that I’m sure it’s starting to sound trite, but basketball video games have come a long way since I first got into them. There are older titles that still hold up quite well and are fun to revisit, but even then, technology has allowed their successors to implement graphics and features that definitely weren’t possible all those years ago. To that end, old hoops titles have a few quirks that tend not to be found in modern games. Some of those quirks can be quite amusing to look back on.

That’s not to say that we didn’t recognise them as being quirky at the time, of course. They were the things that we noted in both amusement and frustration, and talked about when we compiled our Wishlists. Over the years they’ve become somewhat nostalgic, although we’re not exactly clamouring to see them return. One of those quirks was an instant replay glitch that was often listed in the Cheats sections of gaming magazines and websites alike. Let’s take a look back…way back…