Episode #346 of the NLSC Podcast is out now! Derek (aka Dee4Three) and I are your hosts for this week’s show.

Controversy strikes as an unskippable ad has made its way into NBA 2K21 Current Gen. It isn’t the first time this generation, but the backlash has prompted a statement from 2K, one that we find questionable. This prompts us to recall other controversies, and the tendency for some gamers to make excuses for them time after time. We also talk about the logistics of an indie developer making a fully 3D 5v5 basketball title. With the release of the third gameplay blog for NBA 2K21 Next Gen, we have our first look at MyPLAYER builds and AI improvements. Once again, the included clips seem to tell a different story to what’s been written in the blog. The changes to builds, Badges, and the Takeover system leads to a discussion of stories and RPG mechanics in MyCAREER. After summing up our thoughts on the gameplay blogs, we dive into a fun topic: the amazing fictional NBA team names in Super Dunk Shot! 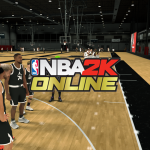 We’re at midcourt, and the ball is about to go up…it’s Monday Tip-Off! Start your week here at the NLSC with a feature that’s dedicated to opinions, commentary, and other fun stuff related to NBA Live, NBA 2K, and other basketball video games. This week, I’m tipping things off with some thoughts on the quality of online play in NBA 2K; or, more accurately, the lack thereof.

Hey, remember when I wrote about the desire to balance positivity and negativity in my articles? I mentioned that I wanted to avoid writing an article about online play in NBA 2K that ended up being more of a rant than constructive criticism, cathartic as it may be. Well, I’m going to go ahead and vent a little. I was originally going to leave it at my Friday Five detailing my experiences with the Jordan Rec Center, but I need to expand upon that. As someone who was traditionally an offline gamer who has since been drawn into online in recent years, I’m now remembering why I avoided it.

When the NBA 2K League was announced, I noted the slight possibility that it would have some tangible benefit for the rest of us. Specifically, I suggested that in the best case scenario, it would encourage 2K to improve their servers and address some of the long-standing issues with online gameplay, in order to make the “home version” of the NBA 2K League more like the real thing. Unfortunately, that hasn’t been the case. NBA 2K online has strayed further and further away from sim basketball, and the servers continue to be extremely unreliable. Combine this steady decline with a toxic part of the community, and honestly, I don’t see the situation getting any better.

END_OF_DOCUMENT_TOKEN_TO_BE_REPLACED

Monday Tip-Off: Should NBA Live Be More Like NBA 2K? 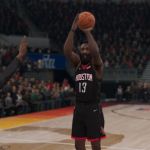 We’re at midcourt, and the ball is about to go up…it’s Monday Tip-Off! Start your week here at the NLSC with a feature that’s dedicated to opinions, commentary, and other fun stuff related to NBA Live, NBA 2K, and other basketball video games. This week, I’m tipping things off with an interesting and important question that continues to be hotly debated: should NBA Live be more like NBA 2K?

As NBA Live continues to rebuild and re-establish itself in the face of NBA 2K’s dominance, there is a debate among basketball gamers as to the best direction for the game. There are gamers who would prefer that NBA Live remains distinctly different to NBA 2K in focus, style, and approach, and generally reject any suggestions that Live should borrow ideas from 2K. Conversely, as noted here on Reddit, there are others who would prefer that NBA Live essentially copy NBA 2K, but for a few details here and there (such as avoiding 2K’s approach to microtransactions).

Naturally, between those two extremes are more nuanced suggestions about NBA Live doing its own thing, while also borrowing some of NBA 2K’s best ideas (and in some cases, putting its own spin on them). To that end, of course, there’s still debate as to which ideas should be borrowed, how closely NBA Live should mimic what NBA 2K is doing, and to what extent any 2K concepts should be reworked. It leaves us with the question of whether or not NBA Live should be more like NBA 2K, or as the thread over on Reddit put it, “NBA 2K re-skinned” rather than NBA Live. For me, the answer is yes…and no.