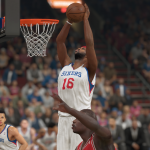 You may recall that last July, I posted a video about a generated rookie in my NBA 2K14 MyCAREER, Sergei Kursov. In that pilot for a series of videos recounting stories from my NBA 2K14 MyCAREER, I discussed how Sergei’s Clippers tattoo clashes with his status as a player for the Celtics. I’m now picking up the series again with a profile of Terry Hanson.

If you’ve been reading my NBA 2K14 MyCAREER recaps or story topic in the Forum, or regularly listen to the NLSC Podcast, you’ll know that Terry Hanson has quickly become one of my all-time favourite teammates. A fictional swingman who was an absolute steal at the 30th pick in 2015, I’ve made it my mission to turn Hanson into a star. As you’ll see in this profile, he’s an exciting player to play alongside, and already worthy of the title of Virtual Hardwood Legend.

Stay tuned for more NBA 2K14 MyCAREER Stories, and Hanson highlights once he’s healthy again! Shout out to Dee for smoothing out and remastering some old clips that were captured at 30 FPS, for use in this feature. For more great basketball gaming videos from Dee and myself, from the weekly NLSC Top 10 Plays to the NBA 2K14 Retro Series, be sure to subscribe to the NLSC YouTube channel!