Welcome to this week’s edition of The Friday Five! The Friday Five is a feature that I post every Friday in which I give my thoughts on a topic that’s related to NBA Live, NBA 2K, and other basketball video games, as well as the real NBA, and other areas of interest to our community. The feature is presented as either a list of five items, or in the form of a Top 5 countdown. This week’s Five is a list of five amusing graphical glitches found in various basketball games.

Generally speaking, nothing spoils a game quite like glitches. In the worst case scenario, glitches impede progress and render games unwinnable, or perhaps corrupt save data. They can be advantageous to exploit, yet frustrating if you’re not the one benefiting from them. Graphical glitches tend to be ranked much lower on the scale of annoying bugs and gameplay quirks, though they can still detract from the atmosphere in a title that’s aiming for stunning, realistic graphics. If nothing else, they don’t represent a game at its visual best.

Of course, graphical glitches in particular can be very amusing, and few games are immune to them. Basketball games are no exception, and over the years, various hoops titles have included some funny graphical glitches. To the developers’ credit, some of them are only noticeable in instant replay, where it’s possible to advance frame by frame and really scrutinise the animations. Graphical glitches from the early days of basketball gaming are obviously the result of primitive technology, but are nevertheless good for a laugh. With that in mind, here are five graphical glitches from an assortment of games that I hope you’ll also find amusing.

1. Shawn Bradley is Too Tall 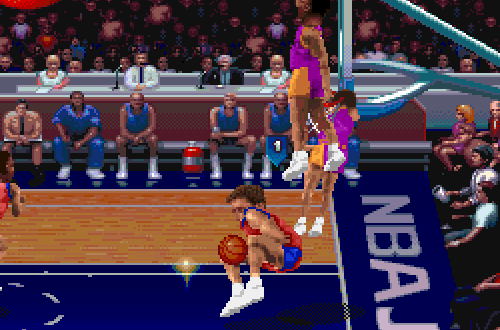 The PC version of NBA Jam Tournament Edition is one of my all-time favourite games, and a title that I’ve spent hours with over the years. However, as I’ve noted in my retrospectives of the game for Wayback Wednesday, it’s a somewhat buggy port, and I’m not just talking about Kevin Edwards using Blue Edwards’ portrait. It seems as though the players are scaled larger relative to the size of the court, when compared to the arcade and console versions. This is very apparent with Shawn Bradley, who is the tallest player in the game at 7’6″. He really stands out as a result, particularly when he triggers some graphical glitches on various high flying dunk animations.

Because Bradley is so tall, he’s basically looking directly at the rim, if not down into it. As a result, when he’s descending from one of the really high flying jams, the games doesn’t know quite how to handle the rim interaction on the finish. This means he’ll often drop way past the rim and be practically sitting, kneeling, or lying on the floor before snapping back up into the finish animation. Some of the other taller players can be a bit glitchy as well, but Bradley’s impressive height causes this to happen far more often. Unlike the issue with Kevin Edwards’ portrait, this error is something that I noticed very early on, and I’ve always found it to be a funny visual. 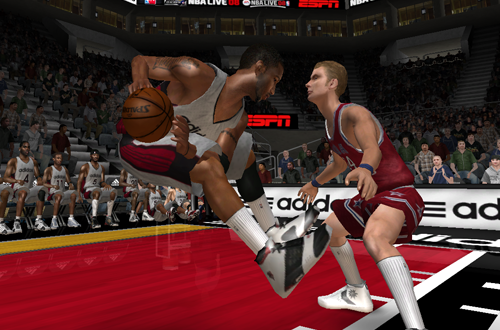 NBA Live 07 and NBA Live 08 for PC were unquestionably afterthoughts for EA Sports, particularly the latter. All the same, they did have some effort put into them, such as the addition of some new animations. These include a few new dunks and layups, a variety of pull-ups, leaners, and signature shooting styles, and a couple of triple threat moves. The triple threat moves are the cause of the graphical glitches in question; as you can see above, pivoting just the right way would cause a player to levitate. For all the marvelling at the hangtime of the game’s greatest dunkers, not even Air Jordan himself could perform such a feat indefinitely, as in those games.

In all fairness, this glitch was only noticeable in instant replay, when advancing frame by frame. The transition between animations/stances happened too quickly during gameplay to be seen, so it was one of those graphical glitches that most of us would have stumbled upon by accident. Looking back, it’s probably as good an indication as any that that version of the game was on its last legs and they were getting ready to pull the plug. It’s just unfortunate that it also meant the end of NBA Live on PC, as I’d suggest that a port of the Xbox 360/PlayStation 3 versions of NBA Live 09 and NBA Live 10 would’ve been well-received, and likely still being modded today. 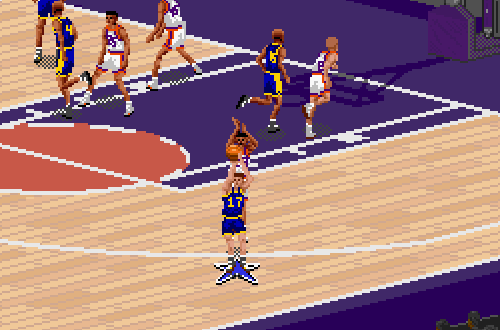 Some of the games from the mid to late 90s do hold up surprisingly well and are fun to revisit, if only for a little while. When you do dust them off however, you’ll be reminded of a few funky graphical glitches, such as the shooting animations in NBA Live 95 and NBA Live 96. If the players were facing away from the basket, or in some cases standing parallel to it while close to the baseline, it was possible to make them shoot backwards or sideways. Most of the time the players would turn to face the basket accordingly – sometimes rotating 180 degrees in midair to do so – but when that didn’t happen, the ball would be launched sideways or blindly over their heads.

There was no advantage or disadvantage to this. Shooting percentages were the same and defenders could still block the shot just as easily, but it always looked weird. The sideways shot in particular looks strange and is harder to trigger, but I remember it happening to me more often in the PC version of NBA Live 96. As I mentioned, we’re talking about fairly primitive technology here, as the players weren’t even proper 3D models. While they look extremely outdated now, and I’m sure that many younger gamers wouldn’t get their appeal, there’s obviously a lot of nostalgia in those games, and even unusual graphical glitches like this are part of our fondness for them. 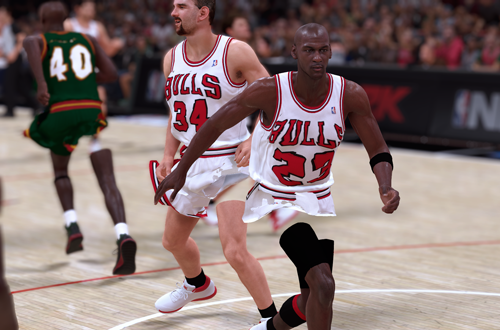 From primitive technology to more sophisticated player models and faces. Advances in technology haven’t eliminated graphical glitches; once again, no game is immune to the occasional hiccup that ends up leaving something looking unusual. NBA 2K has boasted some fantastic graphics over the course of this past generation, and while not all of the player faces are spot on, there are some extremely realistic ones. That all goes out the window when the models start glitching out, though. The cloth physics in various NBA 2K games over the past generation can be temperamental, revealing more of the players than you would expect…or rather, revealing there’s nothing there.

It doesn’t happen in every single game, but it’s not uncommon for the players’ shorts to rise up and billow out like a skirt, revealing that their legs are attached to…well, nothing. This glitch often happens in instant replay, but it’ll also occur during regular gameplay as well, where it’s naturally very noticeable. Weird graphical glitches will also occur with the body models as well. While shooting a free throw with Carmelo Anthony in NBA 2K13, his back suddenly imploded and his torso appeared inside out and scrambled. In more recent games, I’ve also noticed arms bending at strange angles when trying to avoid clipping through opponents, which frankly just looks painful. 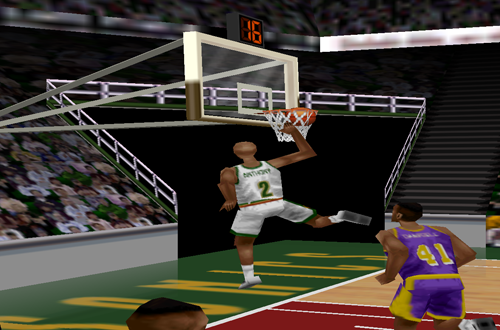 Let’s wrap things up with a glitch that we can actually trigger ourselves! I wrote about this one for Wayback Wednesday, but it’s worth mentioning again here. Older games stored less data for instant replays, specifically the position and actions of the players on the floor, but not the actual players in question. For the most part this wasn’t a problem as we generally went into instant replay and watched the clip immediately, but gamers discovered that these limitations could be exploited with amusing results. If you made a substitution and then went into instant replay, the new player replaced the old one in the clip, and would do what they had done upon watching it back.

Once again, there was no advantage to doing this, but you could set up weird and unlikely scenarios such as Shaquille O’Neal hitting a three-pointer, Muggsy Bogues dunking like Shawn Kemp, and so on. As I mentioned in my article, it got to the point where this glitch was often listed among the cheats, tips, and tricks in video game magazines and websites. Eventually developers put an end to the glitch as games kept track of the actual players on the floor, or didn’t allow us to rewind past a dead ball in instant replay. This certainly made presentation more realistic and that was for the best, but there was still novelty in being able to mess around with the game like that.

Can you recall any other noteworthy graphical glitches in basketball games? Let me know in the comments below, and as always, feel free to take the discussion to the NLSC Forum! That’s all for this week, so thanks for checking in, have a great weekend, and please join me again next Friday for another Five.