Welcome to this week’s edition of The Friday Five! The Friday Five is a feature that I post every Friday in which I give my thoughts on a topic that’s related to NBA Live, NBA 2K, and other basketball video games, as well as the real NBA, and other areas of interest to our community. The feature is presented as either a list of five items, or in the form of a Top 5 countdown. This week’s Five suggests five basketball gaming theories that are as yet unproven, but I believe are certainly plausible.

Video games are full of mysteries, usually thanks to cut or unfinished content, or some other aspect that is left unexplained. Sports games generally don’t hold quite as many of these secrets or causes for speculation compared to other genres, but they do still have their points of interest. Over the years, basketball games have contained traces of planned features, or other signs of interesting development back stories that have been left untold. It’s led to a lot of speculation and guessing in our community, but hey, they’re just theories; basketball gaming theories!

Ham-fisted references to a popular YouTube channel aside, I’ve been thinking about a few unusual occurrences and unexplained content in a handful of basketball games. I wanted to offer up some explanations, and since I can’t definitively prove them, I was originally going to title this article “5 Wild Basketball Gaming Theories”. However, I decided to drop the “wild”; not only because it was a bit clickbait-y, but also because I believe at least a couple of these theories are quite plausible. It would be nice to get definitive answers about these matters one day, but for now, here are five basketball gaming theories for your consideration. 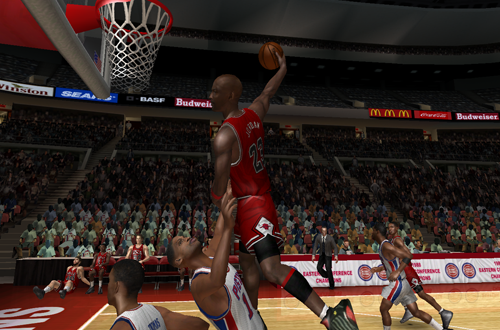 As far as basketball gaming theories are concerned, this one isn’t too far-fetched in my opinion. We’ve never received an official explanation for the remnants of historical teams found in the roster files for NBA Live 08 PC, but we can logically conclude that it’s leftover data from a feature that fell through. NBA Live 08 did feature some bonus content in the form of eight FIBA teams, with the promise of more squads in NBA Live 09 and beyond. Although it’s possible that the FIBA teams were planned all along, I can’t shake the feeling that they were the backup plan, a replacement when EA couldn’t license all of the players that they needed for the historical teams.

The inclusion of FIBA teams was announced in August 2007, deep into what was then a jam-packed preview season. Additionally, the inclusion of only eight teams feels like a soft launch, a result of finalising the deal fairly late in the development cycle. However, the most persuasive evidence for this theory can be found in the rosters of the PC version. The leftover data for all the retro players appears before the FIBA players, indicating the FIBA players were added later. The retro players are also assigned non-existent team IDs beginning with 60, while the first FIBA team ID is 71. Even if the FIBA teams weren’t replacing the retro teams, they were added after them. 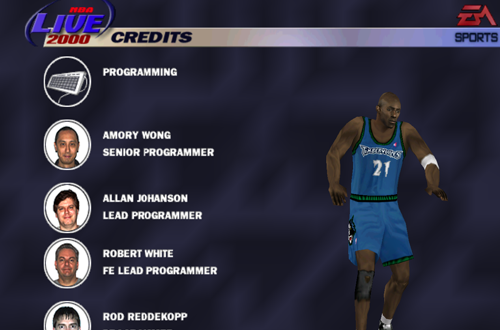 Tim Duncan’s appearance on the NBA Live 2000 cover is a throwback to a time when the featured player wasn’t as big of a deal as it is now. While Duncan is one of the all-time greats and a future Hall of Famer, he was never the most marketable or popular player in the league. Still, he was fresh off winning his first championship in just his second season, and had established himself as one of the top players in a new crop of superstars. In an era when a bench player could be featured on the cover of a video game – Sam Cassell and NBA ShootOut ’96 comes to mind here – he was a logical choice for Live. However, I’ve come to wonder if he was actually EA’s first choice.

Despite the fact Tim Duncan is on the cover, it’s Kevin Garnett that is prominently featured in the game’s branding and presentation. The intro video for NBA Live 2000 opens and closes with Kevin Garnett shooting around on an outdoor court, making him look like the featured player. Furthermore, if you view the credits scroll from the main menu, it features Kevin Garnett’s in-game model dancing in the corner. It just seems odd to feature him so prominently given that Duncan is the cover player. KG did appear on the NBA Live 2001 cover, so maybe there was a switch and he was pushed back to the following year when the Spurs won. Just putting it out there! 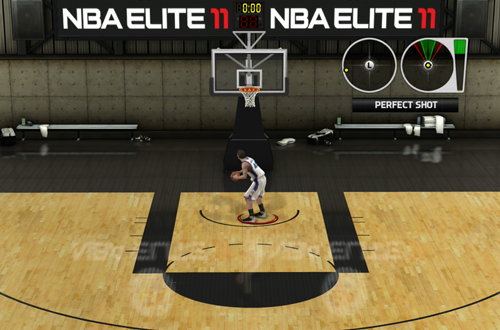 Sounds kind of obvious, I know. What developer wouldn’t want to include Michael Jordan, one of the most popular and marketable superstars in the history of the sport, in a basketball game? Allow me to add some context so that it’s more than a “well, duh” proclamation. I get the impression that EA was counting on being able to put Michael Jordan in NBA Elite 11, due to various design choices that were made for the new Become Legendary mode. First of all, there’s the name EA chose for the mode, as “Become Legendary” was a marketing slogan for the Jordan brand. The new career mode would’ve also tipped off with your player in the Jordan Brand Showcase.

It’s unlikely that EA would go all out with the Jordan branding if they didn’t count on featuring MJ himself in some capacity. Consider that our Become Legendary players were set to progress through 23 levels, and be challenged to match various milestones and accomplishments from Michael Jordan’s career. It would’ve been strange to base your career mode around His Airness if he wasn’t ever intended to be featured in the game, especially when your competitor does actually include him. With this in mind, it may well have been a case of negotiations with MJ falling through. As such, instead of being a part of our journey to Become Legendary, he became a 2K exclusive. 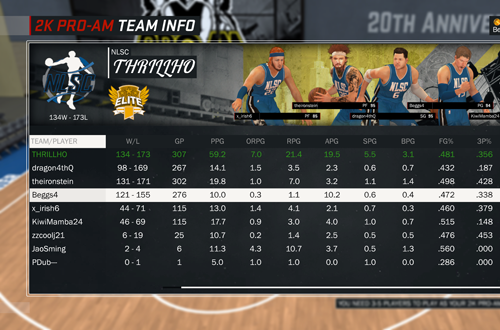 I don’t have anywhere near as much plausible evidence for this theory compared to the others I’ve suggested, but nevertheless, I feel it might explain what happened. For those who are unaware, the first version of 2K Pro-Am in NBA 2K16 allowed full team customisation and image importing as soon as you created a squad. In NBA 2K17, advanced customisation had to be unlocked by levelling up from Amateur to Pro and Elite tier. The exact requirements for reaching those tiers, particularly Elite, were never revealed and seemed to vary. 2K couldn’t, or wouldn’t, provide a concrete answer, despite obviously programming said requirements. A classic 2K move!

Even with a lack of clarification from 2K, it was obvious that earning Elite status required an outstanding winning percentage, though the number of wins tended to vary from squad to squad. However, I have a hunch that for a brief time, 2K allowed everyone to get to Elite status after stringing together a few wins. The NLSC squad suddenly had access to image importing and was recognised as Elite despite a losing record, so we were able to complete our branding with the site logos. We’d lose Elite status after a tough session, but the imported artwork remained. The other possibility is that it was a glitch, and if so, I’m not mad about it. It worked in our favour for once!

5. Alternate Teams Were Considered for The Jordan Challenge 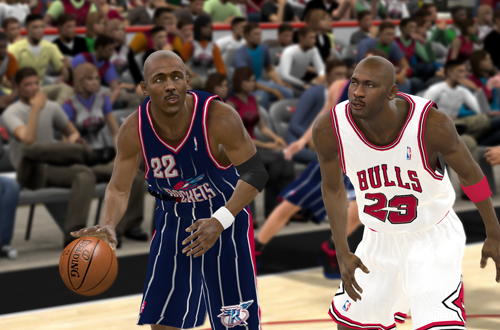 While The Jordan Challenge was a fantastic mode, as I noted in my reimagining, there are ways it could’ve been better. Specifically, there was some repetition to the mode, and a lack of variety and breadth in the selection of teams. To that point, my theory is that 2K was considering alternate or perhaps even additional teams for The Jordan Challenge, but couldn’t license the players. The evidence for that suggestion is the presence of various player face files with IDs in the range of the featured historical players. Many of the files do not contain valid textures and can’t be used as is, but a few of them do have working faces, albeit with missing arm textures.

Interestingly, among those faces are Hakeem Olajuwon and an older face for Clyde Drexler with a shaved head, as well as faces for a young Shaquille O’Neal and Penny Hardaway. This would suggest that at one point, 2K were considering including a couple of other teams from the mid to late 90s, perhaps the 1997 Houston Rockets and 1995 Orlando Magic. Dan Majerle is even in there, suggesting that the 1993 Phoenix Suns were considered, and no doubt scrapped due to the inability to license Charles Barkley. It’s possible they’re leftover assets from the old Decade All-Stars as not all of the unused faces are Jordan era players, but some seemingly point to alternate plans.

What are some other basketball gaming theories that you believe, or find interesting to speculate on? Let me know in the comments below, and as always, feel free to take the discussion to the NLSC Forum! That’s all for this week, so thanks for checking in, have a great weekend, and please join me again next Friday for another Five.