Welcome to this week’s edition of The Friday Five! The Friday Five is a feature that I post every Friday in which I give my thoughts on a topic that’s related to NBA Live, NBA 2K, and other basketball video games, as well as the real NBA, and other areas of interest to our community. The feature is presented as either a list of five items, or in the form of a Top 5 countdown. This week’s Five is a list of the five best prizes that you can get on the Daily Spin in MyCAREER.

The Daily Spin is one of the features in NBA 2K that, as I’ve previously noted, arguably doesn’t get enough credit. Sure, it’s a gimmick that encourages us to fire up the game every day – something that’s great for NBA 2K’s engagement numbers – but it can also yield some useful prizes. It can also hand us a few duds, of course, but that’s a matter for another time. This week, it’s all about the best prizes that are available on the Daily Spin; the ones where it actually makes sense when your MyPLAYER pumps their fist in excitement after the wheel lands on them.

Now, keep in mind that at least a couple of these are subjective, and do depend on which modes you play. For example, if you don’t play Park and/or have little interest in outfitting your player, certain prizes will never hold any appeal. You can also get to a point where a particular prize loses it appeal as you’ve got everything you want or need in that regard, and landing on it again just feels like a waste (free though it may be). In any case, as someone who has spent a lot of time in MyCAREER over the past few years and relied heavily on the Daily Spin for freebies, these are my picks for the best prizes that you can be lucky enough to spin on a regular basis. 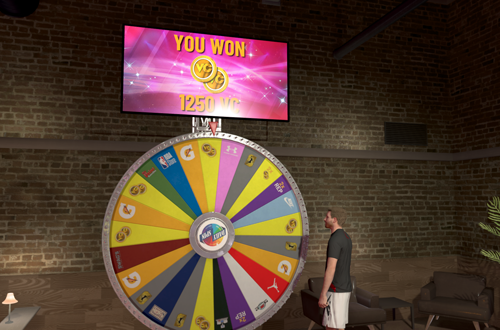 It probably goes without saying, but any time you can boost your VC balance with the Daily Spin, it’s been worth trying your luck. Experienced MyCAREER gamers know how expensive everything is in the mode, from attribute upgrades to clothing items, and anything else you want to buy. If you’re determined to have a No Money Spent experience – and as I’m no fan of microtransactions, I strongly encourage it – then you’ll need to grind for every little bit of VC that you can. That means every time you play MyCAREER, you need to do everything in your power to earn as much VC as possible, from putting up big numbers to repetitive tasks on your MyCOURT.

And of course, it also means hitting up the Daily Spin every day for a shot at one of the VC prizes. Anything over 1000 VC is optimal, but even picking up 500 VC here and there may be the difference between upgrading another attribute now, and having to play another game to boost your balance. Even if you don’t get VC on a day’s spin, it doesn’t cost anything to try, and hopefully you’ll land on one of the other desirable prizes. Unfortunately, for some unknown reason the VC amounts aren’t displayed on the wheel in NBA 2K21 Current Gen, so it’s harder to aim for a specific VC prize this year. As long as you land on one of them, however, it’s virtual money in the bank. 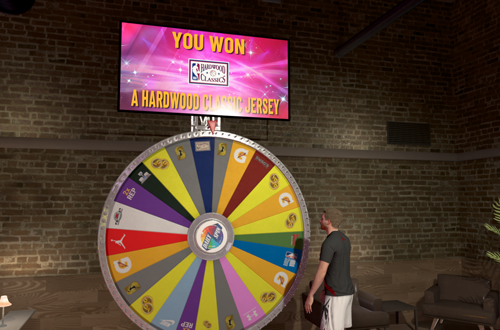 Considering that a lot of premium clothing items are excluded from the Daily Spin prizes, it’s nice to have the free Hardwood Classics Jersey on the wheel. If you want to make your player look stylish for Park games on a budget, then you could do a lot worse than picking up a retro jersey. The only drawback is that you don’t get your choice of uniform. One will be randomly chosen for you, and there’s no guarantee that it’ll be a player you like, or a top tier star. It’s a lot better than playing in the default brown shirt though, and I’d suggest that it’s definitely appropriate attire for playing some pickup games in; far more appropriate than designer clothes, at the very least!

I’ve been lucky enough to win a Michael Jordan jersey once, which needless to say, saved me a lot of VC. Funnily enough, I’ve won a P.J. Brown throwback jersey in a couple of games over the past few years, and I’ve also seen a number of other people wearing it in The Neighborhood. I’m guessing it’s one of the jerseys with the best odds of being selected when you spin that prize, though on top of the MJ jersey, I’ve also won a Shaquille O’Neal throwback, and the retro uniforms of a couple of other Hall of Famers. They’re fun to collect – especially when they don’t cost anything – and I’m all for having a few different outfit options to change things up in cutscenes and Park. 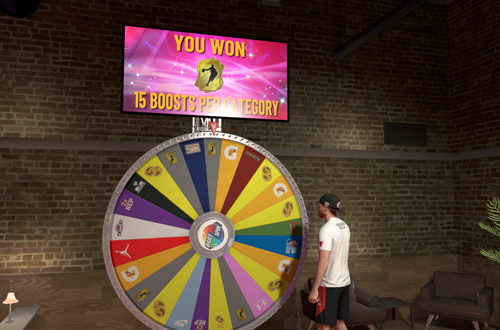 VC may be the best prize as it lets you buy anything, including attribute upgrades so that your player can level up quicker, but the Skill Boosts aren’t a bad get either. While you’re still levelling up and not as strong as you’d like to be in various areas, Skill Boosts can help out with a small lift. They’re normally available from a stall in The Neighborhood for a modest amount of VC, but if you’re going to spend VC on upping your ratings, it’s better to make it a permanent boost. Instead, stockpile Skill Boosts by winning them on the Daily Spin. If you’re like me, the Skill Boosts and Gatorade Boosts are the prizes that you’ll end up winning more often than not.

In NBA 2K19 and NBA 2K20, the Daily Spin used to be remarkably generous with its Skill Boosts prizes. It was easy enough to max out your inventory at 99 Boosts across the board, and keep replenishing them with another spin or two throughout the week. Like most of the prizes on the Daily Spin however, NBA 2K21 Current Gen has nerfed the amount of Boosts that you can win in one go. You’ll still pick up at least a few each time though, and if the wheel lands there a few times per week, you’ll likely have a healthy supply. You’ll notice that you’re able to play a bit better than your attributes would suggest, so a handful of free Skill Boosts doesn’t go astray. 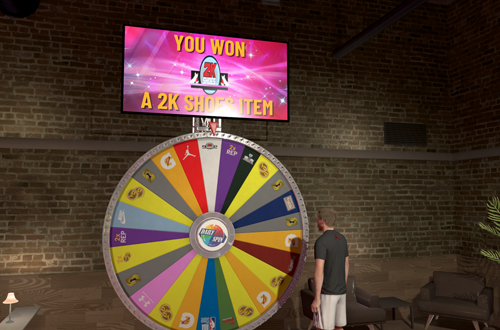 At some point – as in, as soon as you possibly can – you’ll want to trade in those 2K Generics for some real shoes from your brand of choice. The problem is that they’re quite expensive, costing several games’ salary. If you’re still grinding up your player, you’ll want to save your VC for attribute upgrades. The additional VC that you win on the Daily Spin may help out, but the most cost-effective method of getting some new kicks is to win a free pair on the wheel. You’ll only ever get one pair at a time, and not all shoes are available for both NBA/Pro-Am games and The Neighborhood, but if you can spin this prize regularly, you’ll end up amassing a decent shoe collection.

I like to outfit my MyPLAYER with a pair of Jordan Vs every year, given that it’s my favourite Air Jordan shoe and I once owned a pair of them. They always run about 6000 VC for each colourway though, and while I could wait until I’ve maxed out my player, I’ve been able to take advantage of the Daily Spin to complete a collection of virtual Jordan Vs, along with a few other Air Jordans that I like. If there’s but one item of clothing all MyCAREER gamers are bound to get, it’s their shoe of choice. You might as well let 2K Shoes treat you to a free pair; with the cost of attribute upgrades, you’d be wise to save every last bit of VC you can, and just try to win cosmetic items. 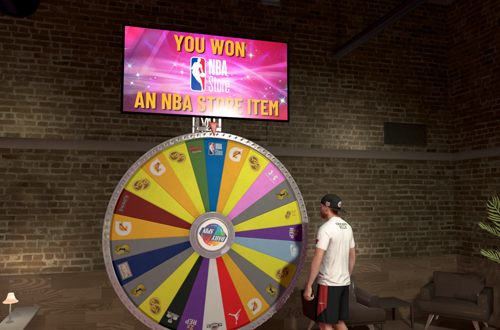 If you like to outfit your player in NBA apparel, then spinning an NBA Store Item on the wheel is another desirable prize. As you might expect, the top tier items such as player jerseys and other premium clothing isn’t prize eligible, but there’s still a fair amount to choose from. I usually end up picking up some practice gear and team shorts, as well as a hat (worn backwards in true 90s fashion, of course). As with all other clothing items that are available as prizes on the Daily Spin, you can save a lot of VC this way. If you want your player to appear less generic – which is vital if you actually want to get games in The Playground – free NBA apparel is a good start.

Another benefit to winning a free item from the NBA Store is that you can use it to pick up accessories to wear in NBA games. Most of the regular bands and braces admittedly aren’t that expensive, but it all adds up, and once again, you’re much better off saving your VC for attribute upgrades. Besides, if there’s nothing else you like, it’s a handy option to have. You can get all the accessories you need if you spin this prize often enough, including the more expensive goggles if you want them. I believe that NBA accessories should be completely free as that would only be realistic, but in lieu of that, it’s handy to win this prize when you’re in the market for some NBA gear.

Next week I’ll be covering the worst Daily Spin prizes, but until then, what are your picks for the best? Let me know in the comments, and as always, feel free to take the discussion to the NLSC Forum! That’s all for this week, so thanks for checking in, have a great weekend, and please join me again next Friday for another Five.