Posted by: Andrew in Basketball Video Games, Features, The Friday Five May 7, 2021 0

Welcome to this week’s edition of The Friday Five! The Friday Five is a feature that I post every Friday in which I give my thoughts on a topic that’s related to NBA Live, NBA 2K, and other basketball video games, as well as the real NBA, and other areas of interest to our community. The feature is presented as either a list of five items, or in the form of a Top 5 countdown. This week’s Five is a list of five details found in various basketball games that aged rather quickly.

It’s impossible for basketball video games to completely avoid being outdated in their content. Obviously there are benefits to this – as I’ve discussed on many occasions, I love the way hoops games can act as interactive NBA almanacs – but the point is that certain aspects of basketball titles will have already aged by the time we get our hands on them. If nothing else, the rosters need to be locked by a certain date, which gives us fun oddities such as players only appearing on a particular team in video games, players who ultimately never played in the NBA being included in games, and so on.

Of course, now that official roster updates are the norm, it doesn’t matter that a game’s roster has aged by its release. An abundance of content updates and patches ensure that modern games can evolve and stay current far more easily than their much older predecessors could. Of course, there are elements that aren’t updated, and although their outdated nature may not ruin a game, they nevertheless stand out. Some of the examples I’m discussing today aged quickly because of events that occurred after their release, while others were already outdated before the game hit shelves. Either way they’re fun to look back at, especially when a major event is involved. 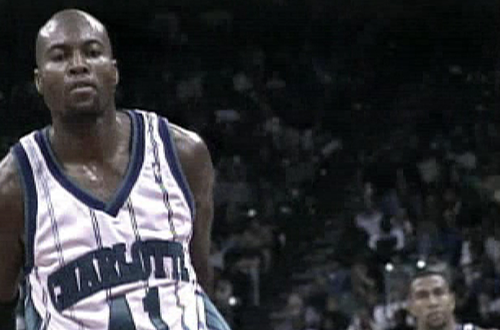 With a lockout delaying the start of the 1998-99 NBA season, NBA Live 99 was always going to have a tough time being up to date at launch. I mean, technically it wasn’t outdated; after all, when it was released, the only official NBA rosters were the final ones from the 1998 season. Technicalities aside, on PC at least, official patches ensured that it was destined to go from being a 1998 season game released months too late to a proper 1999 season title. The Class of 1998 rookies and the transactions from an abbreviated offseason were accounted for in the official roster updates, but player movement and a lack of preseason footage aged the game’s intro extremely quickly.

Here are a few examples. Nick Van Exel had been traded to Denver and Kevin Willis was dealt to Toronto (before the lockout, as it happens). Veterans Dell Curry and Olden Polynice signed with the Bucks and Sonics respectively. The champion Bulls had mostly been broken up, with Scottie Pippen, Dennis Rodman, Steve Kerr, and Luc Longley no longer on the team. By midseason, Stephon Marbury was traded to the Nets and Glen Rice was traded to the Lakers. Admittedly a lot of the clips are very brief, but when compared to the NBA Live 98 intro, you’ll notice several more players on teams they were no longer with, due to the unusual circumstances the game faced.

2. References in the NBA Live 2005 Soundtrack 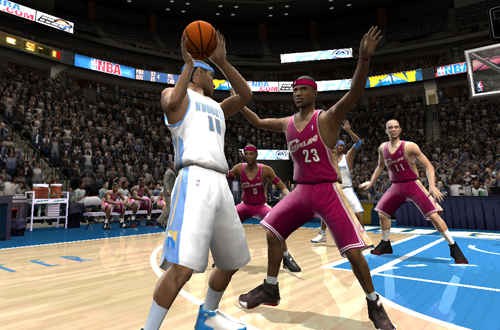 NBA Live 2005 is a fantastic game, one of the absolute best releases in the NBA Live series. It’s not perfect – no game ever is – but you’d be hard-pressed to find an area of the game that isn’t generally held in high regard, including the soundtrack. During this era, it was still common for NBA Live and other basketball games to include remixed versions of popular songs, as well as original tracks. Not only did this keep the games family friendly (looking at you, “Right Thurr“!), but it also enhanced the atmosphere by including references to basketball and games. If nothing else, they didn’t leave us wondering what a song had to do with hoops (looking at you, “Young and Sexy“!).

In some cases though, references to specific players aged quickly. “It’s In Da Game” by Murphy Lee – arguably the de facto title track of NBA Live 2005 – includes lyrics about playing with different teams, e.g. “I’m a Wizard, I use Larry (Hughes), when he struggle, I use Jerry (Stackhouse)”. And right after those lyrics, “If you triple Carmelo (Anthony), then I’m a kick it out to (Jon) Barry”. It flows nicely, but the unfortunate part of it all is that by the time the game came out, Jon Barry had left the Denver Nuggets to sign with the Atlanta Hawks, a move reflected in NBA Live 2005. As such, an outdated scenario was referenced every time “It’s In Da Game” came on. 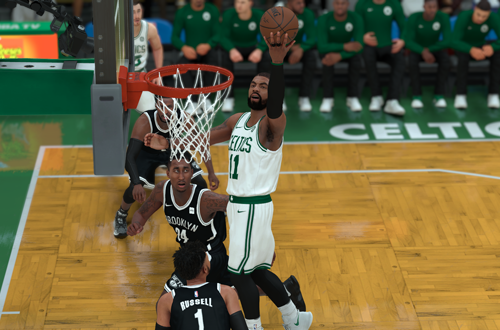 Although there’s no “cover curse” associated with basketball video games in the same way appearing on the Madden cover is looked upon as a bad omen for NFL players, a large number of cover players for NBA Live, NBA 2K, and other basketball titles have gone on to be traded. Usually it’s at least a couple of years later, in which case their cover hasn’t aged worse than any other detail. A handful of cover players have moved on the year afterwards, though. Notably, the faces of NBA Live 2004, NBA Inside Drive 2004, and NBA ShootOut 2004 – Vince Carter, Shaquille O’Neal, and Tracy McGrady respectively – were all traded before or during the 2005 season.

And then, you’ve got the players that were traded in the same season as appearing on a cover. Then-Hornet Glen Rice was the face of NBA In the Zone ’99 (aka NBA Pro ’99). Later copies had a new cover following his trade to the Lakers. Ray Allen’s NBA ShootOut 2003 cover aged after he was traded midseason. A few covers have featured players traded before the games even came out. This includes NBA ShootOut 2002 with Stephon Marbury, though as with Rice, later copies had an updated cover. More recently, Kyrie Irving’s NBA 2K18 Cavs cover was outdated after he was traded to the Celtics. In addition to a new cover, the day one patch included a fixed title screen. 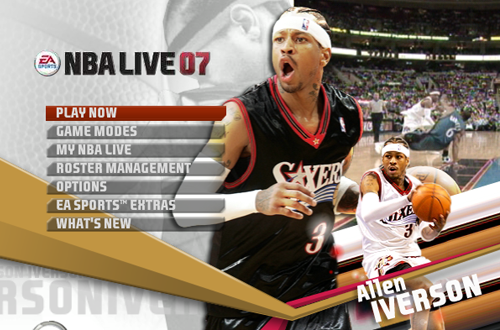 After trades and signings occur, players can be moved around in the rosters to keep a game up to date. Outdated covers are largely a non-factor, and if anything, might make an early version of a game a collectors’ item. Menu artwork that has aged due to a blockbuster trade hardly ruins a game, but it does stick out like a sore thumb far more than outdated cover art. It’s the drawback to featuring renders or real photos of major players as part of the frontend presentation. Allen Iverson’s trade to the Denver Nuggets in 2006 immediately aged his photo and highlights in the menu of NBA Live 07 PC. It happened again in NBA Live 08 PC with Pau Gasol’s trade to the Lakers.

Frontend art and video updates briefly gained popularity as a result, particularly when games continued to receive unofficial roster updates for several years afterwards. Of course, console users were stuck with outdated presentation; not a gamebreaker, but a slight hindrance to the immersion and a feeling of a game being current. I’d suggest this is why games have moved away from this approach. Indeed, menu art in recent NBA 2K games has aimed for more of a timeless look, such as choosing to decorate the background and transitions for MyLEAGUE/MyNBA with historical photos. It ironically allows the game to remain current, as there’s less risk of outdated artwork. 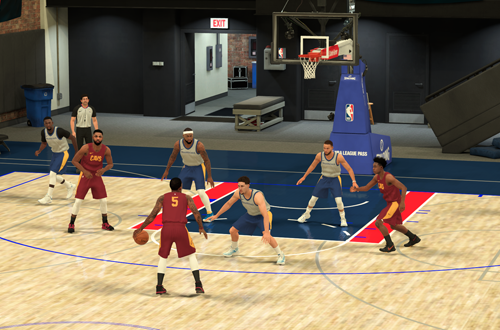 I’ve previously discussed some of the enduring traditions in basketball games, one of which is the use of the winner and runner-up from the previous season’s NBA Finals. These two teams usually become the default options in Exhibition/Play Now mode, in honour of being the final two squads standing at the end of last year. Likewise, demos have usually featured the defending champion and their opponent, being the obvious choices when the goal is to include two prominent teams in a small preview of an upcoming release. They’re also usually the default teams in practice modes such as 2KU, which has meant that they’re also playable in the annual Prelude demo.

Once again, the prospect of player movement undermines what is otherwise a solid idea. Take NBA 2K15 and NBA 2K19, for example. The Heat, and especially the Cavaliers, became far less appealing teams to play with in a demo or use in 2KU after the departure of LeBron James both times. From a different perspective on details that aged quickly, including the Cavs and Warriors as the demo/2KU teams year after year was relevant given their four consecutive Finals showdowns, but it also meant a lack of variety in the annual teaser. Recent NBA Live demos notably sought to avoid this by including four teams, instead of only featuring the previous year’s Finalists.

Aside from the obvious examples in the rosters, what are some other details in basketball games that you recall as having aged very quickly, or being outdated before a title was even released? Have your say in the comments below, and as always, feel free to take the discussion to the NLSC Forum! That’s all for this week, so thanks for checking in, have a great weekend, and please join me again next Friday for another Five.