The Friday Five: 5 Factors That Make a Basketball Game a Favourite

Welcome to this week’s edition of The Friday Five! The Friday Five is a feature that I post every Friday in which I give my thoughts on a topic that’s related to NBA Live, NBA 2K, and other basketball video games, as well as the real NBA, and other areas of interest to our community. The feature is presented as either a list of five items, or in the form of a Top 5 countdown. This week’s Five examines five factors that go into making a basketball game a personal favourite.

What determines your favourite basketball video games? Quality and liking them a lot, obviously! Short and snarky answers aside, there are a number of factors that we can identify as playing a role in determining our favourite hoops titles. Nostalgia comes into play, but even then, there are specific aspects that hold nostalgic appeal. There have been several fantastic basketball games over the years, so it’s interesting to look at the reasons why some of them end up standing out as our personal favourites, while others don’t rank up there for us, as good and enjoyable as they may be.

Furthermore, there’s also the matter of unpopular and controversial opinions, such as a game with a mixed reception being a personal favourite. When a game draws very polarising reactions, these factors will determine which side of the fence you stand on. And of course, just because a game is a personal favourite, it doesn’t necessarily mean that you perpetually hold it up as the gold standard, or believe that no game since has been technically better. It just means that it occupies a special place in your memory, and you hold it in high regard for the great times that you had with it. If we break it down, I’d suggest that these are among the main factors that determine our favourites.

1. Your First Basketball Game (Or One of Them) 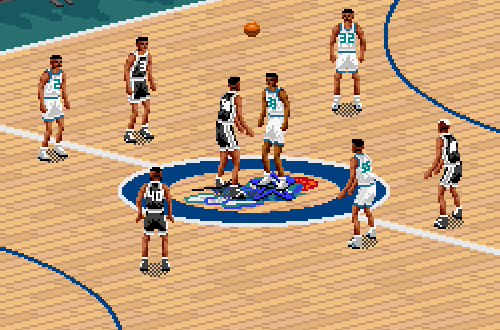 In 2002, Sam Viviano – then-art director of MAD magazine – summarised the concept of the Nostalgia Filter thusly: “MAD was at its best whenever you first started reading it.” We are indeed generally biased towards our favourite things from the era in which we discovered them. If nothing else, that’s when they were fresh, novel, and exciting. As the years go by, we can grow dissatisfied and even jaded, though not necessarily without good reason. Knowledge and experience makes us better critics and more inclined to be critical, as does expecting value for money and consistent improvement. If you’ve been playing basketball games for a long time, it’s easy to get burned out.

Needless to say, that wasn’t an issue in our earliest forays onto the virtual hardwood. Unless your very first basketball game stands out as one of the worst that was ever made, it was probably a very positive experience for you. In fact, even if the game was kind of rubbish, there’s a good chance you’ll have positive memories of it all the same, and consider it a sentimental favourite even while acknowledging its faults. It’s why older gamers can hold a primitive title in high regard to the confusion of younger gamers, and why younger gamers are nostalgic for titles that older gamers may recall as disappointing. Your first game and other early favourites will always stand out.

2. Loving The Season It’s Set In 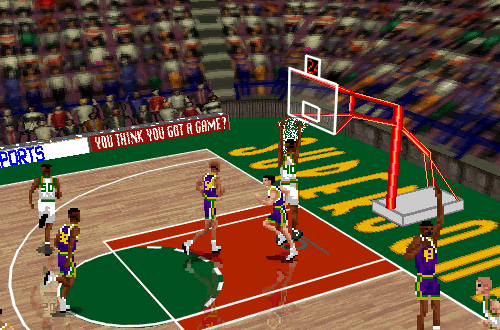 Our enthusiasm for a particular basketball game is also driven by our NBA fandom. Enjoying a particular NBA season isn’t enough to inspire love for a truly broken title, but it can absolutely contribute to your fondness for a game you enjoyed, and help it to stand out in your memory. If you’re feeling positive about both the current season and the latest basketball game, those are the perfect conditions for etching a title into your mind as a future nostalgic favourite. As I’ve noted in many Wayback Wednesday articles, NBA video games serve as interactive almanacs, and if you play along with a season that you’re really enjoying, you’ll likely recall it as a great year for basketball.

It also means that even as a game is surpassed and really begins to show its age, it remains a favourite that you’ll find a way to revisit, even if it’s only in short bursts every now and again. Dusting it off takes you back to a season that you loved, with the players, team rosters, jerseys, courts, and logos that you fondly remember. On a related note, a memorable time in your life can also turn a game into a personal favourite. There have been developments over the past decade that make older titles look a lot better despite being technically inferior, and when you can couple that with simpler times and a fun era in your NBA fandom, old favourites become classics.

3. That Mode/Experience That Had You Hooked 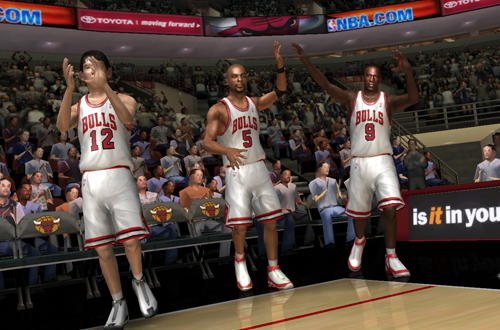 There have been a lot of great basketball games over the years, both sim and arcade, that many of us hold in high regard. However, not all of them become our personal favourites, even when a case can be made that a title is among the best basketball games ever developed. Unlikely as it may sound, sometimes even the greatest hoops titles can fail to hook us when they’re new. In contrast to what I previously noted, not enjoying a particular season for whatever reason may sour you on a great game, or at least fail to inspire you to play it. Perhaps another title – be it a competing basketball game or another genre entirely – ended up monopolising your time and attention.

Conversely, when you get hooked on a game for the entire year that it’s current (and maybe even beyond that), it solidifies its place as one of your favourites. I’m talking about that franchise or career mode save that you couldn’t get enough of, the online team play mode you couldn’t wait to jump into for session after session, or whatever else kept you hooked and allowed you to create many fond memories. All of that enjoyment will also make you far more inclined to overlook bugs and shortcomings, because in the end, none of it prevented you from playing it for hours. If a game can’t reel you in – say, if it has weak, shallow modes – it’s not making your all-time top ten!

4. A Huge Improvement From The Year Before 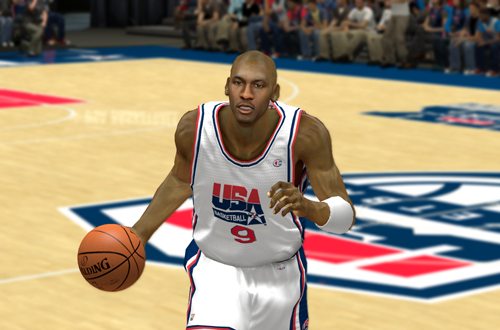 Context is important when we’re talking about our favourite basketball games. We also have to consider its immediate predecessors and successors. Whether or not we can look past a game’s issues – be they bugs, gameplay quirks, or undesirable changes to our favourite mode – often hinges on how we felt about the previous game. If it left us feeling disappointed, a noticeable improvement in its successor can immediately endear it to us, even if it remains quite flawed in its own right. The mere fact that we wanted to see improvement and were satisfied enough with the results can propel any game into our shortlist of favourites, because it looks so much better in comparison.

Of course, that’s not to say that we necessarily overrate games just because they’re strong follow-ups to disappointing releases. There have been years where games have made remarkable jumps within the space of one development cycle, establishing them as fantastic titles in any context. An amazing game will look even better when we hated the one that came before it though, and feel even more satisfying. With that being said, I’d suggest there are a few games that we all rate and rank a little higher than we normally would, thanks to a series having a bounce-back year following a major letdown. After all, their improvements are far more noticeable as a result. 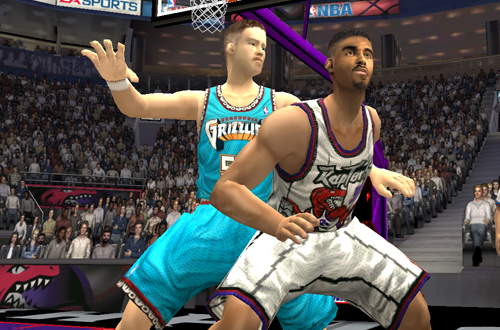 If a game keeps you hooked even when its successor is released, you may not move on from it (at least not straight away). Unfinished business can keep you playing a game that has become a favourite over the past year, especially modes with content that will no longer be accessible once the servers are shut down. Alternatively, you may not feel much incentive to upgrade to the latest release if you’re unimpressed by its previews, or have grown weary of the series. Whatever the case, you’ll be far more inclined to stick with a favourite due to the factors I’ve noted so far, as well as its longevity. This includes a game’s “in-built” longevity, and community-made content.

A title with strong gameplay and a mode that can feasibly be played for years is one that can hold up very well on its own. On top of that, games that are fun and flexible to mod – and therefore easy to keep updated for well beyond their usual life cycle – will retain their place in our hearts. Modding offers the benefit of sticking with a game that’s familiar and enjoyable, while also benefitting from updated rosters and other new content. Even when you finally leave an old favourite behind, the added fun that you managed to squeeze out of it will establish it as one of your most cherished basketball games, and in all likelihood leave you open to dusting it off again one day.

What are some of your all-time favourite basketball games, and what factors led to them earning that distinction for you? Did any of the factors that I described come into play? Let me know in the comments below, and as always, feel free to take the discussion to the NLSC Forum! That’s all for this week, so thanks for checking in, have a great weekend, and please join me again next Friday for another Five.

I’m taking 2K9. It feels entirely different from 2K8 and 2K10, it was the first year I was 100% absolutely engrained in the NBA, I loved the Achievements for getting certain stat lines with certain star players as well as the short little highlight reels they showed before games (“LeBron James and the Cleveland Cavaliers enter New York to take on David Lee and the New York Knicks”, and then it would show a short little highlight reel of each player). The most lethal players in that game were like LeBron, Josh Smith and JR Smith.

Those little details in older games were great! There’s some great presentation in newer games, but I do miss stuff like that.