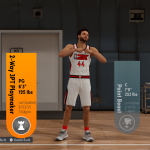 Welcome to another edition of The Friday Five! Every Friday I cover a topic related to basketball gaming, either as a list of five items, or a Top 5 countdown. The topics for these lists and countdowns include everything from fun facts and recollections to commentary and critique. This week’s Five is a list of five frustrating restrictions that we’ve encountered in various basketball video games.

There are obviously going to be restrictions in basketball video games, some of which we’ll find frustrating. In some cases, those restrictions are due to technical limitations. Others are design choices, and those are the ones that we find more bothersome, as we know it didn’t necessarily have to be that way. In all fairness though, these restrictions can sometimes be for the best. If not for some of them, games would be unbalanced and far less enjoyable. When cleverly implemented, restrictions can prevent exploits and ensure that games are challenging, without ruining the fun.

Striving for realism in sim games also results in restrictions that can be frustrating, but ultimately in an enjoyable way, since they reflect obstacles that teams and players do actually face in real life. To that point though, we’re bound to grumble when we’re restricted in a way that doesn’t accurately represent an NBA rule. As for frustrating restrictions that are simply design choices, there have been some over the years that just haven’t been good ideas. Alternatively, they’re good and sensible ideas in theory, but were poorly executed. Some of those restrictions are recent or rare, but others are recurring issues that we’ve been encountering in basketball games for generations. 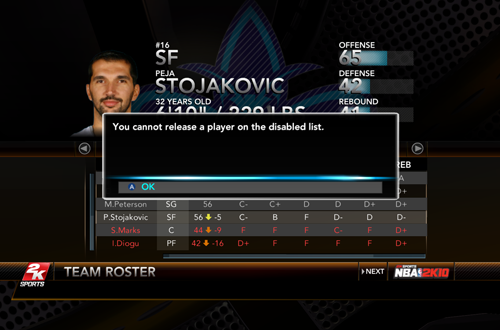 This is a very old issue when it comes to franchise modes, and roster editing alike. Simply put, when you try to trade or release an injured player, you’ll be met with a message explaining that it isn’t possible. The stated reason may be that the other team isn’t interested in any trades involving injured players, or that it isn’t allowed. The former at least provides an “in-universe” explanation for why a trade can’t include an injured player, and it does make sense that a team may not be interested in giving up a healthy player for one on the shelf. Either way however, it stands as one of the most frustrating restrictions that we’ll encounter, and several sim games have featured it.

What makes it frustrating is that this is purely a video game restriction. There’s no rule in the real NBA against trading a player who is injured. In fact, many teams do make deals with players who are injured – and sometimes unlikely to ever play again – because their contract makes a trade work under the cap, and is often set to expire in the offseason, thus providing cap relief. As such, it’s not like other restrictions that – while sometimes frustrating in games – are rules that NBA teams need to follow, and therefore are part of the challenge and experience. It’s also why roster customisation needs a function to reset all injuries. Otherwise, editing rosters can be cumbersome. 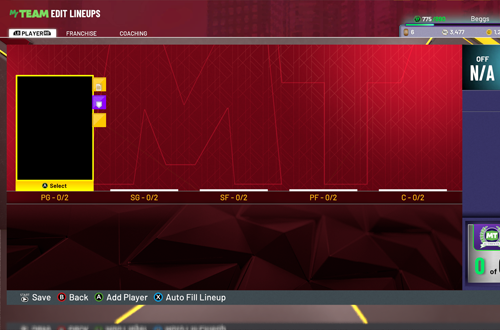 In theory, these restrictions should make MyTEAM less frustrating, particularly in the online arena. In practice, they’ve just led to other annoyances, especially offline. You can see the logic behind this change, as too many gamers used exploitable lineups with players out of position. NBA 2K should be striving for balance, and as I’ve argued before, even fantasy modes should have a sim element at their core. It does stand in the way of fun and challenging ideas such as all-seven foot or all-under six foot lineups, which could be run against the CPU or friends. If the restrictions were only for “ranked” play, it would definitely be quite fair, and far less frustrating.

Even if these restrictions must apply across all modes, they’d be less frustrating if the cards always had the correct positions, and in particular, secondary positions. It’s one thing to prevent an OP lineup by disallowing Giannis Antetokounmpo to be inserted at point guard. It’s another thing altogether to not be able to slide Michael Jordan over to point guard or small forward, just because his card designates him as a shooting guard, and a shooting guard only. Then comes the point of the year where the “Out of Position” cards get released, rendering these frustrating restrictions a moot point. The idea of position restrictions is good in theory, but the execution could be much better.

3. The Current Approach to MyPLAYER Builds 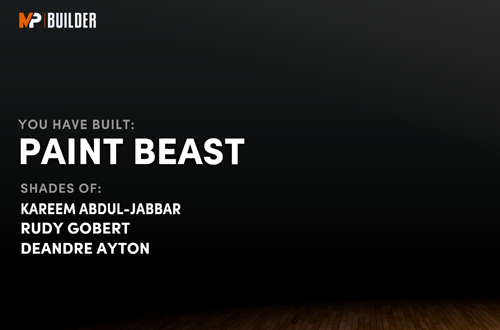 Once again, we’re talking about restrictions that are meant to balance and diversify the game, avoiding similar and OP builds. At least, that’s one of the intentions, but I’ll get to that. The problem here is that the community ends up creating the same OP builds – whichever ones are favoured by influencers whose bread and butter is build videos – so balance and diversity goes out the window anyway. Honestly, when it comes to Pro-Am and other online team play modes, I don’t think any of my builds have been as fun as my Playmaker in NBA 2K17. It still had its restrictions, but they weren’t as frustrating. There was no min-maxing, no fiddling around to find the optimal meta.

Obviously there are people who enjoy meta gaming, and would argue that it adds depth to avatar creation. I won’t deny them their preference, and I’d agree that in theory, depth does lend itself to a more fun and rewarding experience. I don’t agree that it’s been the case in NBA 2K however, given the aforementioned lack of balance and diversity. As I alluded to though, this is by design. If you make a bad build, you need to start over again. To get back to where you were – since there’s no re-spec or VC reclamation – you’ll probably need to buy VC to avoid heavy grinding. Or, you’ll grind again and add to the engagement metrics. It’s simply not fun or fair in my book. 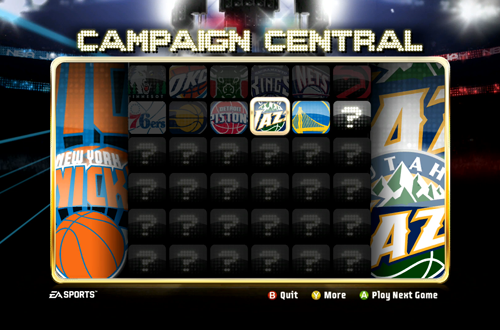 Of course, even if a game isn’t engaging in questionable practices to maximise its recurrent revenue, it can still feature frustrating restrictions. A good example of that is the 2010 reboot of NBA Jam, which had no microtransactions at all. Now, I would call NBA Jam 2010 a somewhat underrated game. It’s fun, and captures the spirit of the original quite admirably. Unfortunately, it does have some problems. When NBA Jam 2010 erred, it did so in two main ways. It was either too faithful of a remake, thus replicating aspects of the original NBA Jam that hadn’t aged well, or it left out good features, some of which were introduced in Tournament Edition and other sequels.

One of the key aspects that made campaign/tournament play so fun in those original NBA Jam titles is that we weren’t restricted to using just one team. While you could always use the same team if you wanted and it worked for you, there was actually an advantage in choosing different teams to maximise your advantage against the next opponent. The Classic Campaign mode in NBA Jam overlooked that, locking us into a choice whenever we started a new save file. I won’t say it completely ruined NBA Jam 2010, and the addition of the Remix Tour and Boss Battles did add some variety. Fortunately they changed course with On Fire Edition, avoiding the repetitiveness. 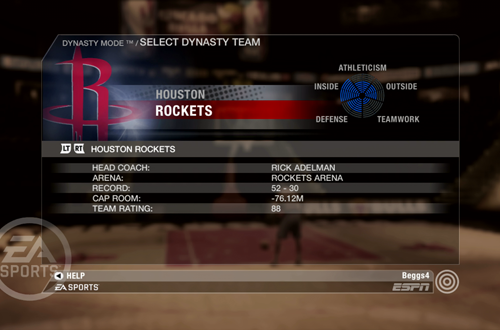 The original Franchise mode in NBA Live did allow for multi-team control. When the mode was revamped into Dynasty in NBA Live 2004, it lost that functionality. Many of us were disappointed, even if we understood the concept that the developers were going for. It was about taking control of a team and guiding them to success, with the prospect of being fired if you performed poorly. The challenge behind that concept is greatly reduced if you’re controlling everyone, whether you’re talking about winning games, or getting a trade to go through. Dynasty was a franchise mode that expected you to pick a franchise to control, not the entire National Basketball Association.

While the concept is understandable, it isn’t necessarily desirable; at least, not if it’s forced upon the user. Through The Association, MyLEAGUE, and now MyNBA, NBA 2K has demonstrated the importance of providing a sandbox experience in its franchise modes. Mind you, it’s not as though those of us who were playing NBA Live back in the day needed NBA 2K to realise this. Even though we understood the approach in NBA Live, we continued to ask the developers to bring back multi-team control. Sadly, it never happened, standing as an example of how NBA Live would introduce ideas with a solid foundation, and then fail to properly build upon them.

What are some of the restrictions in basketball video games that you’ve found to be the most frustrating? What are some that you believe are necessary, even if they’re controversial? Let me know in the comments, and as always, feel free to take the discussion to the NLSC Forum! That’s all for this week, so thanks for checking in, have a great weekend, and please join me again next Friday for another Five.