Welcome to this week’s edition of The Friday Five! The Friday Five is a feature that I post every Friday in which I give my thoughts on a topic that’s related to NBA Live, NBA 2K, and other basketball video games, as well as the real NBA, and other areas of interest to our community. The feature is presented as either a list of five items, or in the form of a Top 5 countdown. This week’s Five is a list of five funny moments in the commentary of various basketball games.

Commentary is an important part of presentation in basketball video games (and most sports games, for that matter). When it’s done well, it adds to a feeling of authenticity, helping to create the illusion that you’re watching a real game. It’s an area of sports video games that has greatly improved over the years, with more lines of dialogue, better reaction logic, and other enhancements thanks to improved technology. At the same time, it can still get rather repetitive after a while, and so there are many gamers who prefer to play basketball games with the commentary turned off.

There’s nothing wrong with that, and in fact, switching off commentary actually adds a certain amount of realism and immersion in career modes, where you obviously wouldn’t be able to hear the commentators while on the court. However, if you do turn off the commentary, you can miss out on some funny moments. From witty lines and Easter eggs to the occasional mistake left in by accident, there are some very amusing gems. I can’t recall anything quite as hilariously bad and sloppy as the outtakes that were left in the DLC for WWE 2K17, but the virtual hardwood has still provided us with some funny moments from the people calling the action. 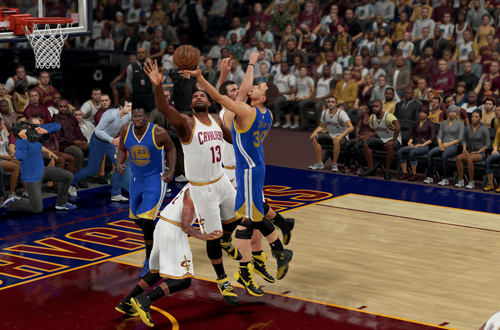 When Steve Kerr made the move from the booth to NBA sidelines as the new coach of the Golden State Warriors in 2014, it also broke up NBA 2K’s commentary team. The move came too late to overhaul the commentary in NBA 2K15, so Kerr appears on the sidelines as a coach while also being on the call; talk about wearing too many hats! Come NBA 2K16, Kerr was replaced by Greg Anthony, forming a new trio with Kevin Harlan and Clark Kellogg. The change was mostly seamless, with several new lines being recorded. However, Kellogg does have a leftover line that leads to a rather funny moment when responding to Anthony’s comments on poor free throw shooters.

As demonstrated in a video from our own Kenny, Clark’s response to Greg’s comment includes the line “and Steve, you can speak to this”; commentary that was originally responding to Steve Kerr in previous games. And no, despite what someone in the video’s comments stubbornly insists, that is Greg Anthony in NBA 2K16, not Steve Smith, as the latter didn’t join the commentary team until NBA 2K17. Why people continue to double-down like that when they’re proven wrong still baffles me, but the proof is in the games themselves (and indeed, that Polygon article). Anyway, it’s a funny error, and we can pretend that Clark just slipped into an old habit on the air. 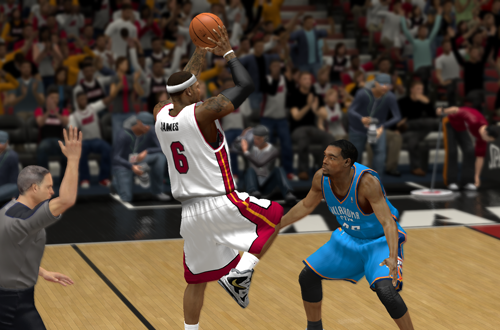 Speaking of Steve Kerr’s commentary, he has some lines in NBA 2K13 that are quite funny in hindsight. I noticed it when I went back and played a game between the Dream Team and 2012 Team USA, and it was amusing how badly it had aged. In a nutshell, Steve criticises the increased reliance on the three-point shot, specifically expressing concern that it’s dumbing down the game and making the sport less fun to watch. Since then, the league has only become more obsessed with the long bomb, as analytics insist that extra point makes it worth missing 27 threes in a row and choking away Game 7 of the Western Conference Finals. Why win, when you can do maths?

Of course, the part that really makes Kerr’s commentary a funny moment in hindsight is that under his guidance, the Warriors have helped usher in the Age of the Three-Pointer. Only a few years after Kerr made those remarks in the virtual booth, Steph Curry set a new record for threes in a season, and Klay Thompson has racked up a few long range milestones of his own. The Warriors do actually take more midrange jumpshots than many fans realise, but their championship runs have served to change the way the game is played. It’s funny to think that the gameplan that has led to their success is one that their own head coach once expressed a particular disdain for. 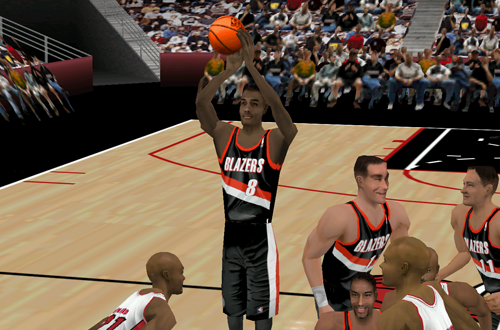 I noted that quite a few aspects of Fox Sports NBA Basketball 2000 made me laugh, when I profiled the game for Wayback Wednesday. As I said in my retrospective, I’d have been quite disappointed with it had I picked it up when it was new, but the weird design choices, off-model faces, and other quirky elements throughout the game, were quite funny all these years later. The commentary is a mixed bag with repetitive play-by-play by Greg Papa and surprisingly decent colour analysis by Doc Rivers, but it isn’t immune from the weirdness. The oddity that stands out here is the fact that their commentary continues even when the game is paused, until they finish their sentence.

On the surface, that might not seem very funny, and indeed, a bit of nitpicking on my part. Going back to what I said in my retrospective though, it’s quite jarring to hear as the usual approach in most basketball games is for the commentary to be paused along with the game, and then either resume where it left off, or be cut short and move on to new lines as the action dictates. The way it’s handled in Fox Sports NBA Basketball 2000 feels like a mistake; it’s as if they couldn’t work out how to pause commentary along with the gameplay! I’ll admit that it probably wouldn’t bother everyone, but I found it pretty funny, in part because it’s yet another aspect of the game that’s so odd. 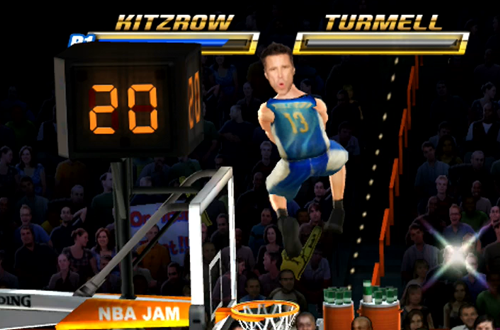 I’ve complimented Tim Kitzrow in several articles over the years, and it’s not just because he’s one of my favourite guests that I’ve had on the NLSC Podcast. His performance as the voice of NBA Jam – the true voice of NBA Jam – is undoubtedly iconic. He played a major role in creating the vibe of the series, enhancing the on-court action with his enthusiastic signature calls, notably “Boomshakalaka” and “He’s On Fire”. When Tim returned to provide commentary in newer NBA Jam games, he had more opportunities to expand on his repertoire, spicing up the classic arcade gameplay with a larger variety of catchphrases, jokes, and pop culture references.

This is particularly evident in the two NBA Jam games by EA Sports: the 2010 reboot and On Fire Edition. In addition to his famous calls, Tim also riffs on the action by breaking the fourth wall to reference gameplay mechanics (or the player’s abilities on the sticks), drops some punny and sometimes vaguely risqué analogies (“Like my wife’s top drawer, nothing but nylon!” to describe a swish), and makes a handful of pop culture references. Two that stand out are the exclamations of “Spinning!” on spin moves, in the way that Charlie Sheen once said “Winning!“, and “No shoot for you!”, a reference to one of the most famous scenes and characters from Seinfeld. 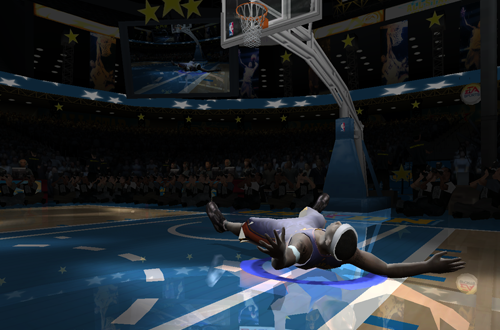 As noted above, many of Tim Kitzrow’s lines in NBA Jam broke the fourth wall, as does the commentary from Ian Eagle in NBA Playgrounds for that matter. It isn’t a phenomenon that’s exclusive to arcade basketball games, however. Quite a few NBA Live and NBA 2K titles have featured funny Easter eggs in their commentary that tease the player for doing something silly or messing up badly. Common examples include wondering aloud what you’re doing on careless fouls or turnovers, failing to pull off a combination in the dunk contest, or launching a full court shot for no good reason; often in the form of a snarky comment about having not read the manual.

I’ll admit that I originally found these to be rather funny when they were snuck into the game, but over the years, I have grown weary of them. I do think they’re great to have in arcade games as they suit the atmosphere, but they can be very distracting in the sim titles. My main issue is that those lines will also be used in situations that are common errors in real life such as stepping out of bounds when trying to make a move, or canned moments such as mishandled passes. It broke that sense of realism and immersion along with the fourth wall, so I’m glad the approach has been phased out somewhat. They have provided some funny moments on commentary, though.

What other funny moments have you noticed in the commentary in basketball video games? Do you have a preference or threshold of tolerance when it comes to sillier dialogue? Have your say in the comments below, and as always, feel free to take the discussion to the NLSC Forum! That’s all for this week, so thanks for checking in, have a great weekend, and please join me again next Friday for another Five.