The Friday Five: 5 Gameplay Mechanics You May Have Forgotten 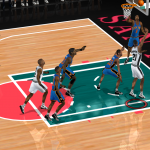 Welcome to another edition of The Friday Five! Every Friday I cover a topic related to basketball gaming, either as a list of five items, or a Top 5 countdown. The topics for these lists and countdowns include everything from fun facts and recollections to commentary and critique. This week’s Five is a list of five gameplay mechanics that you may have forgotten, or not ever been aware of.

It would be wrong to say that basketball video games have tried absolutely every idea imaginable. There are still concepts that have yet to be implemented, or explored to their full potential. Developers have experimented with a multitude of ideas on the virtual hardwood though, from presentation and mode design to gameplay mechanics. While some ideas are better than others, we’ve seen that there are multiple ways to represent basketball in video game form, while striving for a fun and authentic experience. This was particularly apparent when we had several games on the market.

Of course, some ideas were better than others. Contrary to what some basketball gamers, NBA Twitter, and Barney Stinson may claim, new isn’t always better. By the same token, nostalgic doesn’t necessarily mean good. Some ideas were good solutions at the time, but would be unsuitable now. We could argue that others are preferable to their modern equivalents, or could be updated for use in new games. It’s interesting to look back at the gameplay mechanics that were attempted, abandoned, or evolved into something else. We remember concepts such as Freestyle Superstars, the original Isomotion, and separate shoot buttons, but here are some that you may have forgotten. 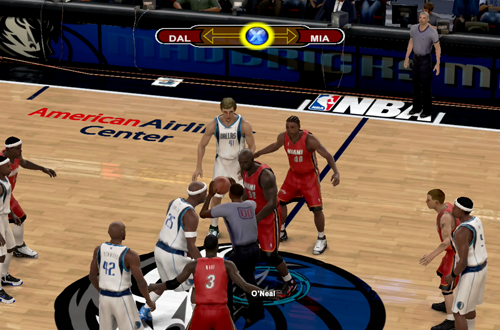 Perhaps one of the most under-discussed gameplay mechanics in basketball titles is how jump balls are handled. Admittedly, it’s not particularly relevant play-to-play. There’s only one guaranteed jump ball per game – the opening tip – and not every title has allowed players to tie up the ballhandler and force one thereafter. Nevertheless, it’s actually interesting to reflect on how different games have implemented such a fundamental aspect of the sport. Mostly it’s a case of hitting a button at the precise moment to outjump your opponent, but jump balls have also involved tapping the button (or indeed furiously mashing it) to fill up a meter that determines the winner.

A couple of games in the NBA 2K series – and their College Hoops equivalents – have experimented with the metered approach. If you go back and play NBA 2K6 or NBA 2K7, you’ll notice that there’s a “tug-of-war” type of mini-game at tip-off. The meter is centred to begin with, and mashing the required button will pull the indicator towards your side. It’s also in effect in games against the CPU, with its virtual button mashing acumen governed by the difficulty setting. I’d suggest it was an effective approach, though it does telegraph the result and detracts from the realism of the presentation. I prefer timing a button press, but again, it did work well enough. 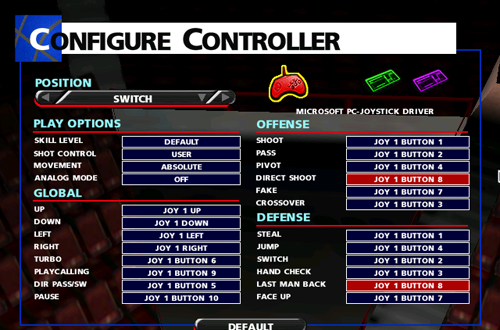 As fond as I am of the NBA Live games that I grew up with, one of my enduring criticisms of those titles is that the trigger zones for dunks and layups too often lead to runners and leaning jumpshots. This does hold true, but I must also admit that there’s a solution that I frequently overlooked back in the day. I’ve reflected on Direct Shoot in Wayback Wednesday, and the way I neglected how it added deeper control over shooting. In short, by holding the Dunk button in NBA Live 98, which became the Direct Shoot trigger in subsequent games, the face buttons will force a specific dunk, layup, or post move. Otherwise, pressing Shoot will just leave it up to the game.

In addition to this extra layer of control over shooting, if you were too far from the basket to trigger a dunk or layup, the player wouldn’t attempt a shot, thereby avoiding an unwanted runner or leaning jumper. NBA Live 98 also had the Drive button, which provided a way of making a hard move to the basket. It’s still quite possible to get to the rim and finish without using these controls, but they are effective in getting the desired results more frequently. I’m sure many gamers did put them to good use, though hopefully I’m not the only one who overlooked them! Gameplay mechanics like these may seem primitive, but were essential to the evolution of player control. 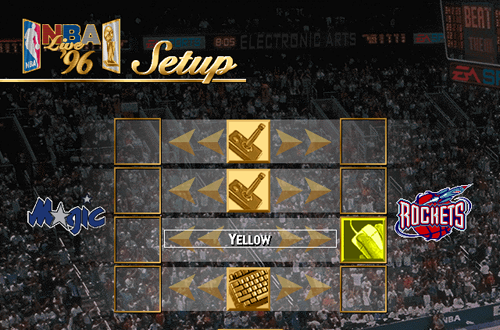 Although dual analog controls revolutionised basketball video games, as I noted in my retrospective marking twenty years of right stick dribbling, there has been some resistance among PC gamers. I’ve always been a bit puzzled by the objections to using a gamepad rather than the keyboard, particularly the assertion that gamepads are a “console thing”. PC gaming has always been about different peripherals, from the Gravis Gamepad line to joysticks and steering wheels. And of course, there’s the mouse. While you may associate it with point-and-click adventure games and turn-based strategy titles, it’s been available as a controller option in basketball games, too.

The PC versions of the early NBA Live games are an example of that, facilitating up to four users: two on joysticks/gamepads, one on keyboard, and one on the mouse. Playing with the mouse in those games is functional, though I definitely wouldn’t say it’s preferable. There’s a setting to adjust the sensitivity, though it’s unlikely to ever be the optimal experience. All these years later however, it does come in handy. If you use XPadder or DOSBox’s in-built key mapper, you can assign keyboard or gamepad inputs to the mouse, essentially replacing it with a more desirable peripheral. Aside from that though, there’s a reason future releases shied away from mouse controls. 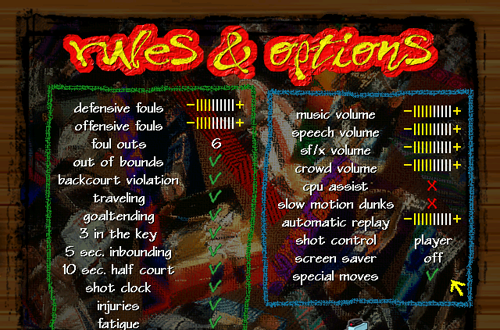 Obviously, shooting controls weren’t the only gameplay mechanics that needed to evolve and expand from their counterparts in early basketball games. By the mid 90s, we were starting to see elusive dribbling moves that could be performed on command. NBA Live 98 was a massive leap forward in that regard, but if you go into the options menu in NBA Live 97 PC, you’ll notice a setting for “Special Moves”. If you’ve never played NBA Live 97 PC or if it’s been a long time, you may be wondering what they were, and why you’d ever want to toggle them on and off. To say that those special moves were underwhelming is one of basketball gaming’s greatest understatements!

Said “Special Moves” amounted to being able to perform a handcheck with a double tap of the turbo button. That’s it! I’ve experimented with that setting on and off many times over the years, and that’s the only difference. This isn’t to say that there isn’t any use for handchecking, but the “Special Moves” label seems to promise so much more. In hindsight, it would’ve been more useful if double tapping turbo instead manually attempted a steal, rather than the automatic swipes that we had to put up with until NBA Live 98 PC delivered an actual steal button. With such limited use and an unfitting label in the options, it’s no surprise that this mechanic is generally forgotten. 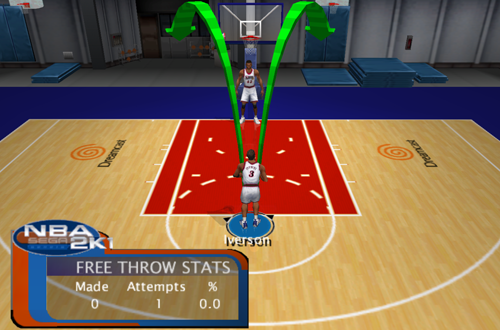 When it comes to gameplay mechanics, arguably no aspect of basketball has seen as many different concepts as free throw shooting. From simply pressing shoot like any other shot attempt, to stopping a moving target and all manner of meters, games have provided us with numerous ways of shooting at the charity stripe. Some of the best include NBA Live’s various takes on the T-Meter (and similar approaches in other series), and the straightforward timing in recent NBA Live and NBA 2K games. Any game that featured some kind of indicator/target that you had to stop when it lined up with the rim is right behind them as far as being the best way to shoot free throws.

And then, there’s the original free throw shooting mechanic in NBA 2K, which involved manipulating the triggers to centre two arrows on the rim. Look, I’ll admit that we all have an inherent bias towards the gameplay mechanics in our favourite titles, particularly ones that we grew up with and are nostalgic for. In my case, that’s NBA Live. However, I’ve played a number of games in the years since, and seen ideas that I wish NBA Live had. NBA 2K’s original free throw shooting mechanic isn’t one of them! I’d say it deserves to be forgotten, but there’s value in remembering it, if only so that the series never again adopts such a clunky, contrived free throw mechanic.

Do you remember these gameplay mechanics? What are some of the other gameplay mechanics that you recall, fondly or not? Let me know in the comments, and as always, feel free to take the discussion to the NLSC Forum! That’s all for this week, so thanks for checking in, have a great weekend, and please join me again next Friday for another Five.