The Friday Five: 5 Gimmicky Features That Turned Out Great

Posted by: Andrew in Basketball Video Games, Features, The Friday Five May 3, 2019 2 Comments

Welcome to this week’s edition of The Friday Five! The Friday Five is a feature that I post every Friday in which I give my thoughts on a topic that’s related to NBA Live, NBA 2K, and other basketball video games, as well as the real NBA, and other areas of interest to our community. The feature is presented as either a list of five items, or in the form of a Top 5 countdown. This week’s Five is a list of five gimmicky features that turned out to be great additions to basketball video games.

If you’ve been playing basketball video games for some time and experienced more than a couple of preview seasons, it’s tough not to get cynical. Chances are you’ve bought into the hype and been disappointed at least once over the years, and have likely learned to take previews with a grain of salt. Many of us have a knee-jerk reaction to features that sound gimmicky, particularly if they’re given a name that makes for a good blurb on the back of the box, but doesn’t sound like it will address our concerns regarding the experience on the virtual hardwood.

Of course, names can be deceiving. Some of the best features don’t have fancy names, while other times it’s the features with gimmicky labels that have a positive impact. A feature needs a marketable name if it’s going to be a selling point, and as long as it’s something that enhances the game, it’s all for the best. Thankfully, there have been several such features throughout the years, some being very pleasant surprises after a gimmicky name initially led us to be dismissive of them. Most of us will undoubtedly remain somewhat sceptical whenever we encounter fancy names during the preview season, but here are five features that turned out great despite sounding gimmicky. 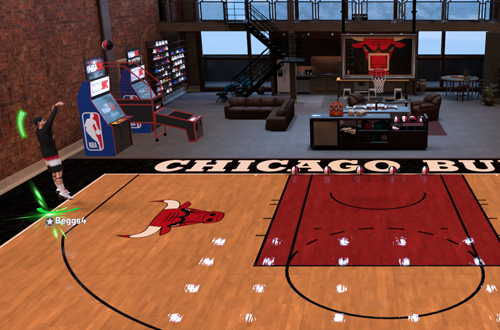 As I mentioned in my retrospective of MyCOURT designs in Wayback Wednesday, when I first heard about the feature in NBA 2K15, I wrote it off as gimmicky. In my defense, I was comparing it to the locker room hubs I’d seen in various WWE games, which basically padded out the experience by encouraging you to unlock items and decorate a glorified menu. Thankfully, MyCOURT turned out to be far more useful than that. The ability to try out different shooting and dribbling animations allowed you to get a feel for them before diving into games that counted; something that was particularly handy for mastering all the different jumpshot release points.

MyCOURT has continued to expand in subsequent games, with various customisation options and mini-games being added. The customisation options are a little gimmicky in their own right, but it’s nice to be able to spruce up your personal court, especially now that the items are all free upon being unlocked on the Road to 99. The ability to invite friends to your MyCOURT or join them on theirs for pickup games and rounds of H.O.R.S.E., Around the World, and other shooting games, also makes it a fun place to hang out in between continuing your NBA career and playing the connected modes. It can even be used to grind a little extra VC, which all adds up. 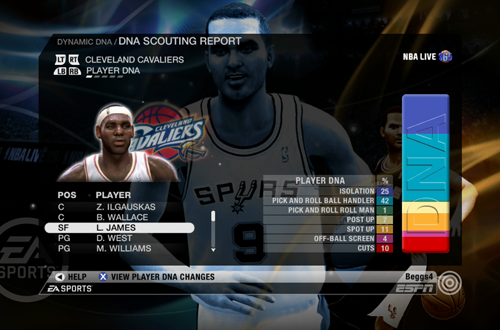 I remember fellow NBA Live gamers groaning when Dynamic DNA was announced for NBA Live 09, as they immediately wrote it off as a gimmicky feature. It’s perhaps an inevitable reaction when a common buzzword such as “dynamic” is used in the name of a gameplay mechanic, but it turned out to be one of the most important additions during NBA Live’s first comeback attempt. Powered by real data from Synergy Sports Technology, Dynamic DNA added deeper player tendencies which allowed for greater differentiation between players, as well as more realistic styles of play and performances. It was something we’d stressed in our Wishlists for some time.

Even though this was before analytics really became popular among basketball fans, once everyone realised what it meant, there was a lot more enthusiasm for it. On top of the regular updates to the Synergy data, NBA Live 09 also received daily lineup updates. Missing players were added in these updates, albeit with generic data that was ultimately fixed in the manual roster update that came through weekly. In NBA Live 10, Dynamic DNA was put to use in the Dynamic Season mode, in which we could replay any games from the 2010 season, change the results, and play a custom Playoff bracket. The “made fresh daily” concept is one that could stand to return. 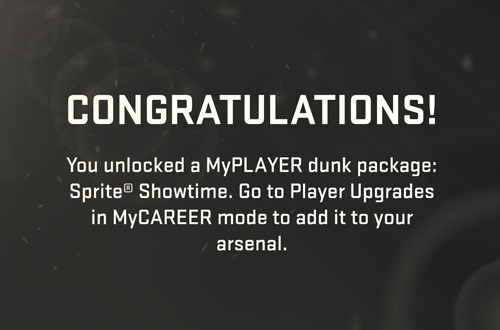 This is a gimmicky feature that started out with a lot of promise, became somewhat useless over the years, and then came back in a big way in NBA 2K19. The concept of Locker Codes may seem like a cheap gimmick to get gamers to fire up the latest NBA 2K on a regular basis on the off chance that they’ll receive a decent reward, but as long as the rewards are worthwhile, the idea has merit. Unfortunately, the first few years of Locker Codes were disappointing with limited quantity codes that were redeemed before most gamers had a chance to punch them in, or laughable rewards such as 200 VC or 100 MT, which weren’t enough to buy anything of significance.

Fortunately, Visual Concepts heeded the complaints about the lack of fairness in redeeming Locker Codes and the quality of the rewards provided, and made some changes for NBA 2K19. Codes are now valid for one week, and are not limited in quantity. This has proven to be a lot fairer to everyone, particularly those who weren’t in a position to punch in the codes as soon as they dropped. Even though I haven’t played a lot of MyTEAM yet this year, I’ve been able to snag some great cards thanks to some good luck with the Locker Codes. It’s been far more worthwhile taking the time to enter them, making them more of an effective hook than gimmicky premise. 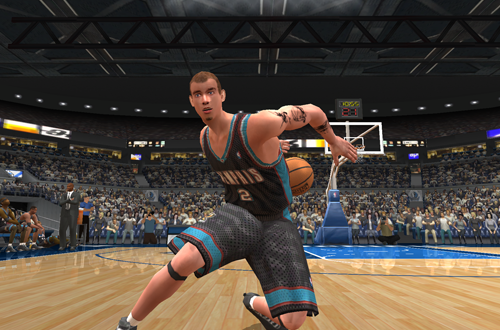 Much like Dynamic DNA, the introduction of right stick dribbling controls under the gimmicky name of Freestyle Control was met with considerable scepticism when it was announced for NBA Live 2003. Up until then, a face button for dribbling moves had sufficed; furthermore, this new approach to controls basically forced PC gamers to invest in a dual analog gamepad. Although the moves were too overpowering in NBA Live 2003, it was clear that the concept was the way of the future. Instead of pressing a dribble moves button and hoping that the appropriate animation would be triggered, we had complete control over crossovers, hesitation dribbles, and so on.

NBA 2K would implement expanded dribbling controls with the original Isomotion, but it’s a system that I’ve always found clunky. Indeed, it was one of the main things that prevented me from really getting into the NBA 2K series. It speaks volumes that despite taking over as the brand leader and openly displaying contempt for EA Sports’ game on many occasions, Visual Concepts did see fit to adopt a very similar style of right stick dribbling controls beginning with NBA 2K13. Right stick dribbling has had a lot of gimmicky names, from Freestyle Control and Quick Strike Ankle Breakers to Isomotion and Pro Stick, but it remains one of the best innovations in hoops games. 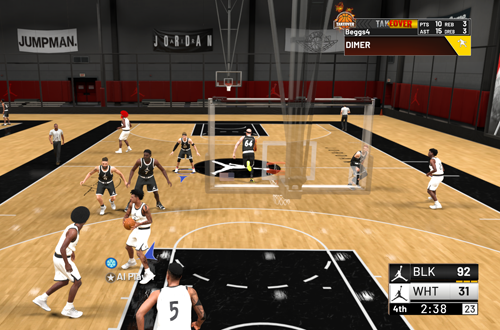 EA Sports sprang Online Team Play on the community in a post-release patch for NBA Live 08 on Xbox 360 and PlayStation 3. At the time it was a novel concept, and it was common to organise meet-ups to get a few games in. It was basically testing out the idea though, and to that end, it was a little gimmicky. Of course, the concept of having all the players controlled by users on their own systems was something that could be expanded upon. That’s exactly what’s happened and in 2019, it’s safe to say that it’s the most popular form of online play. Whether it’s The Playground, 2K Pro-Am, LIVE Run, or LIVE Events, online team play is a lot of gamers’ mode of choice.

With the rise of eSports, it’s even led to the creation of the NBA 2K League, a joint venture between Visual Concepts and the NBA. Even for someone like myself who has traditionally been a franchise gamer, there’s a lot of appeal in building up your player and taking them online to compete alongside friends against other squads. I suppose the concept was always intended to lead to modes like the ones we have now, but for something that could’ve easily turned out to be a gimmicky experiment for a year or two, it’s become a staple of basketball gaming. With that in mind, I guess you never know what gimmicky feature will be The Next Big Thing in the genre.

What are some other features that sounded gimmicky at first, but turned out to be great additions to basketball video games? Have your say in the comments below, and feel free to take the discussion to the NLSC Forum! That’s all for this week, so thanks for checking in, have a great weekend, and please join me again next Friday for another Five.