Welcome to this week’s edition of The Friday Five! The Friday Five is a feature that I post every Friday in which I give my thoughts on a topic that’s related to NBA Live, NBA 2K, and other basketball video games, as well as the real NBA, and other areas of interest to our community. The feature is presented as either a list of five items, or in the form of a Top 5 countdown. This week’s Five is a list of five ways to make your basketball gaming experiences more interesting.

As we discussed in last week’s episode of the NLSC Podcast, the offseason is upon us, which means we’ve put in nine solid months of gaming with last season’s basketball titles. It’s around this time of the year that our habits on the virtual hardwood tend to change. Maybe we start spending time in a different mode, or try to finish up all of our business before this year’s games are released. If we’re enjoying what we’re doing, we may keep playing the current game throughout the preview season. Or, after so many months, we may feel it’s time to shelve the games and play something else.

If you are still keen on virtual hoops at this point of the year, you might feel inclined to try something different. For that matter, you may be considering new ways to play in the upcoming games, as it’s easy to get into a rut and fall back into old habits year after year. I know that I’ve often vowed to change things up by trying a different build or doing something out of the ordinary, only to opt for the familiar. There are some ideas that I’d like to try out at some point though, as well as a few that I have tried, if only briefly. If you’d like a different basketball gaming experience, consider these suggestions this offseason, or come NBA Live 20 and NBA 2K20.

1. Switch the Commentary Off 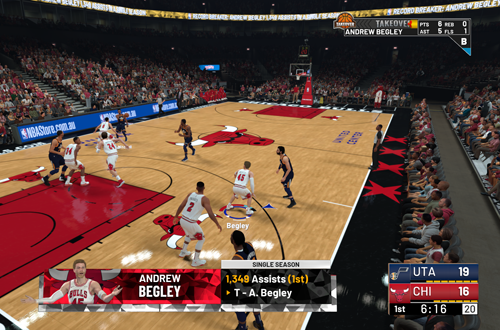 I know that there are people who have done this for some time, but many of us leave the commentary on, even when we’ve heard the same calls and anecdotes for months. I did briefly play without it in NBA 2K19’s MyCAREER, albeit unintentionally. Late last year my old TV stopped working, and while considering the options within my budget, I made do with a spare monitor hooked up to some old PC speakers. Because the speakers aren’t functioning as well as they once did, when I was playing NBA 2K19 on the makeshift setup, all I could hear was the crowd and other arena sounds. I hadn’t disabled the commentary in the options, but it had effectively been muted.

Let me tell you, it changed the experience more than I had anticipated! NBA 2K19’s commentary is far from awful, at least in my opinion, and I normally don’t have any incentive to mute it. However, playing MyCAREER without the commentary actually felt more immersive, like I was on the court rather than watching on TV. After all, the players can’t actually hear the commentators, so only having the sounds of the game made it feel more realistic, with a really different atmosphere even though everything else was the same. If you feel inclined to try it, I’d suggest using the in-game settings rather than relying on faulty equipment, but in any event, it’s an interesting approach. 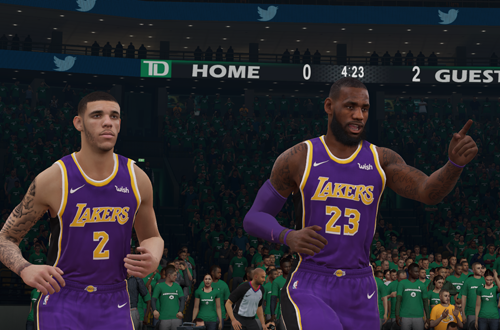 Many years ago, when I was playing NBA Live 96 PC with updated rosters and the single season mode was all I had at my disposal, I tried to mimic the 1998 season as I played along with it. It was easier to accomplish as the mode gave us full control over every other team’s roster, so I was able to account for the trades that occurred, Karl Malone’s suspension, and Charles Barkley’s move to the Rockets’ bench. I even went to the trouble of losing the season opener as the Bulls had; that’s how dedicated I was! When franchise modes came along, I began taking more liberties with reality in order to create my own narrative, having a lot of fun along the way.

However, the idea of playing a season influenced by results from the real NBA has always remained an interesting prospect. It’s one that the developers themselves have explored, with features such as NBA Live 10’s Dynamic Season. It is of course still possible to manipulate the entire NBA in MyLEAGUE, allowing you to play a season that mirrors real life if you wish. You just have to yield control to reality and live with the consequences, as well as keep up with the NBA season; or perhaps, replay the season when it’s done, making adjustments at the appropriate junctures. It means extra work, but it can be a fun and challenging way to play a season in a basketball game. 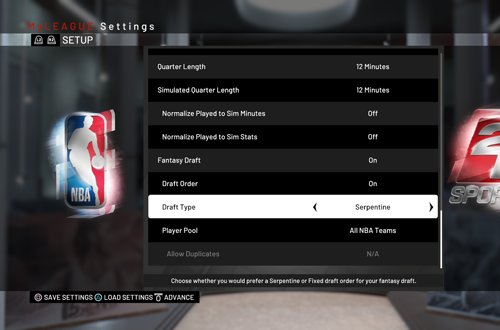 I’ve generally shied away from fantasy drafts and leagues, as I’ve personally felt too disconnected from the very start of a franchise mode game whenever I’ve tried them. That’s just me though, and while it’s not something that I enjoy doing, I do still think it’s a great option to have in franchise gaming. If you want to shake up the league and set up dozens of “What If” scenarios with crazy lineups, there’s no easier way of doing so. If you’re after the fairest and most challenging scenario, I’d recommend not giving your team the first pick in a fantasy draft, or at the very least, choosing the serpentine option so that you can’t easily take all of the best players.

NBA Live’s Franchise mode has very limited options when it comes to fantasy setups, but with MyLEAGUE and MyGM, NBA 2K allows us to create a myriad of fantasy scenarios. Replace all of the current teams with their All-Time squads, or set up a league featuring the historical teams. Mix and match with current rosters as you like, or go ahead and throw historical players into a fantasy draft. Once again, I find that it’s too disconnected from reality right out of the gate, but there’s no reason that you have to be that pedantic. If you’re burned out on playing with real NBA rosters, why not give it a try? The results can certainly be wild. 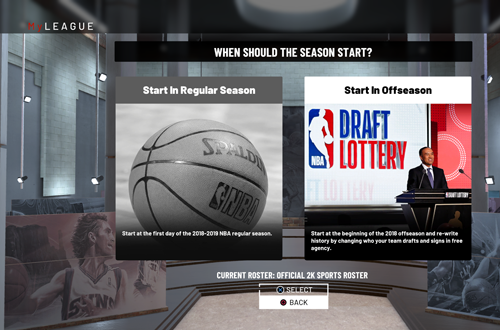 Two of the most underrated options in NBA 2K’s MyLEAGUE mode are the ability to start on the current date with all of the real NBA stats and standings, and the option to start at the beginning of the offseason rather than the regular season. The mode has had the options for a few years now, and they’re something that franchise gamers have wanted since the modes were introduced some twenty years ago. Start Today provides us with the scenario of taking over a team midseason (and potentially in rough shape), while rolling back to the beginning of the offseason provides us with a do-over as part of the whole “If I were the GM” aspect of franchise modes; a big part of their appeal!

Given that we are in the offseason, Start Today isn’t viable unless you want to skip to the 2020 season (and indeed you may want to do that, especially if you have a good custom Draft Class with Zion Williamson and company). It may be an idea that you leave for NBA 2K20, or alternatively, you could sim to a desired point before playing any games and making any roster moves. Simulating to a set date would also be an interesting scenario for the beginning of a career mode game. Normally you can crack the starting lineup fairly early on, but simming would make it happen later, potentially create more of a challenge, and even out the inflated stats that are all too easy to tally. 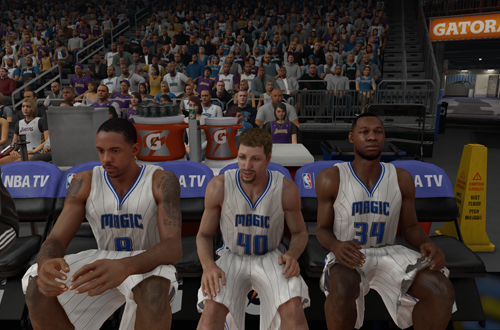 Every aspect of MyCAREER is about your player becoming a superstar. You’re the protagonist in what is essentially a Hollywood production, everyone gushes about you even when you’re still 60 Overall, and if you have any interest at all in the connected modes, you better level up fast! It’s not a bad approach, but it’s one that discourages you from walking any path other than being the Next Big Thing. That’s a shame as being a role player strikes me as quite an interesting way to play through a career in a basketball game. Winning would be a lot tougher when you can’t dictate the action as the star player, and you’d have to do your part in playing some great team basketball.

Your general career trajectory in basketball games also makes it very difficult to win the NBA’s Sixth Man of the Year award. Being a super sub on a winning team would be another interesting way to play, but it’s not really feasible. I guess it is possible in MyCAREER once you unlock the ability to change the team’s rotation, but you still have to become a star to get to that point. Playing as a role player would make for a long, slow grind – unless you also play the connected modes a lot – but it would be an interesting change of pace. If you’re not bothered by the disadvantage online, opting not to be “The Man” could be an enjoyably different approach to career modes.

How do you like to change things up in basketball games to keep them fresh and interesting? Let me know in the comments section below, and as always, feel free to take the discussion to the NLSC Forum! That’s all for this week, so thanks for checking in, have a great weekend, and please join me next Friday for another Five.

Yes, it would be very cool if the single-player MyCAREER aspect was a little more MMO-oriented and you could choose a “class” like role player, star, starter or sixth man (or even bench warmer — hey, who am I to judge)… I mean, we’re just playing the CPU so give the player the freedom (though we are in a very small minority on this one, but MyCareer has been around for a decade and is getting stale anyway).

Ideally though, it would not be our choice, but instead the game would be able to reflect what our role should be based on our teammate grade, stats, etc. I guess you could play the mode as a role player as it is, but the cutscenes would tell you otherwise (they should get rid of those anyway lol).

Edit: And I have actually unintentionally been a role player in the past as I’ve used the career mode as a means to grind badges and attribute upgrades, so I was literally simming full seasons and only playing the playoffs just for the hell of it, so by my third season I was still coming off the bench… now that everything can be unlocked online, I don’t use it anymore.

Definitely. If you’re grinding for Badges and attribute upgrades to be competitive online then it’s not the ideal path, but if you’re just playing the NBA side of things, it’d be a fun change of pace.

One thing that I always do is to put the dream team players in the last team that they played (except Michael Jordan that I put in the Bulls) .
Magic is a laker, Bird a Celtic ect…
The other legends O do a draft until each of the 30 teams got 3 legends and they’re current roster.
Then I played with the Bulls!

Nice! Yeah, MJ looks a lot better on the Bulls than the Wizards.