The Friday Five: 5 Modes I Haven’t Played Much

Welcome to this week’s edition of The Friday Five! The Friday Five is a feature that I post every Friday in which I give my thoughts on a topic that’s related to NBA Live, NBA 2K, and other basketball video games, as well as the real NBA, and other areas of interest to our community. The feature is presented as either a list of five items, or in the form of a Top 5 countdown. This week’s Five takes a look at five game modes that I haven’t played much of over the years.

There’s almost too much to do in basketball video games these days. The amount of modes in NBA 2K in particular caters to a wide variety of tastes; whether you prefer competitive online play, card collecting and team building, living the life of an NBA player, or sitting in the GM’s seat, you can find something to play. Needless to say, this is a good problem to have. It makes older titles look even more primitive, and as we move forward, stresses the importance of NBA Live being able to improve upon the depth and variety of its modes.

While it’s a good problem to have, a bevy of deep modes can leave us struggling to get the most out of a title before the next game is released. As I’ve discussed, it’s a problem that’s further exacerbated when there are multiple hoops titles that you want to play. I’ve spent many hours playing basketball games over the years, and I’ve built up a substantial collection of titles. However, I can’t say that I’ve been able to get the most out of all them, or spent as much time with some of the modes as I would have liked. Glancing at the modes in recent games, or looking back at older titles, I can think of at least five modes that I feel I’ve neglected. 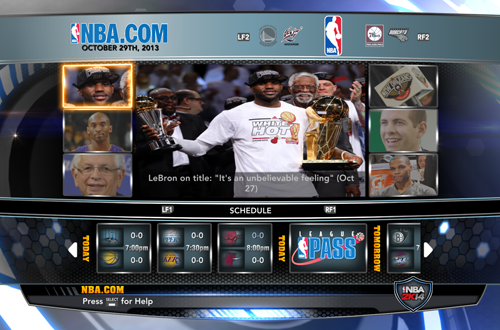 When I looked back at the history of franchise modes for Wayback Wednesday, I felt more than just a pang of regret when I covered Association. It made me wish that I’d been able to get into the NBA 2K series sooner. As I’ve mentioned before, I’m not a fan of the early incarnations of Isomotion, finding the dribbling controls very clunky. I stand by that assessment, but my inability to enjoy 2K’s gameplay also prevented me from enjoying the deep franchise mode experience on offer in Association. In short, it’s everything that I wanted the Franchise and Dynasty modes in NBA Live to be, but as of NBA Live 19, that depth just isn’t there.

If the depth of Association made me wistful about NBA Live’s franchise modes, then what NBA 2K has accomplished with MyLEAGUE and MyGM has been downright frustrating. I don’t play other sports games or follow their preview seasons closely, so I can’t make any educated comparisons with their franchise modes. However, I do feel quite confident in saying that if MyLEAGUE and MyGM aren’t the deepest franchise experiences in sports gaming, they certainly rank up there. I had originally intended to play MyLEAGUE this year, but when our 2K Pro-Am squad decided to give online one more try, I was once again grinding ratings and Badges in MyCAREER.

2. The One & Its Connected Modes 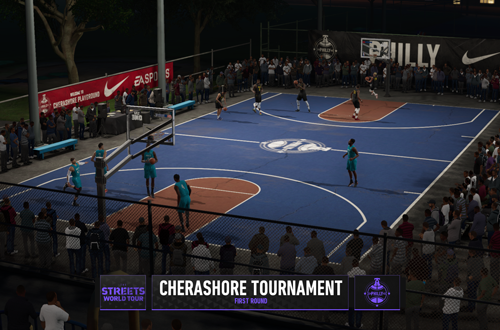 Having spent so much time in MyCAREER since 2012, I haven’t felt like playing the career modes in NBA Live. It takes so long to play through a season and grind ratings in MyCAREER that I haven’t been up to doing it again in Rising Star or The One. On top of that, while I do like that NBA Live offer a more straightforward career mode, it’s not as engaging. Furthermore, for all my gripes with legacy issues in NBA 2K, NBA Live’s gameplay just isn’t there yet. I’ve been able to enjoy my time with other modes in NBA Live this generation, but I haven’t been hooked by The One, and have also been dismayed by it taking so much focus away from the rest of the game.

The One does provide some well-intentioned and innovative modes in the form of LIVE Events, The Streets World Tour, and Court Battles, which I have spent some time with. I’ve been by impressed by how easy it is to improve your player simply by playing LIVE Events and The Streets compared to 2K Pro-Am and The Playground, and the lack of microtransactions is also very welcome, but it’s not enough to keep me invested. Further improvements to gameplay are crucial for NBA Live’s quality and appeal, but a lot more work needs to go into its modes. The One is fine, but still isn’t quite on MyCAREER’s level. The other modes have even more catching up to do. 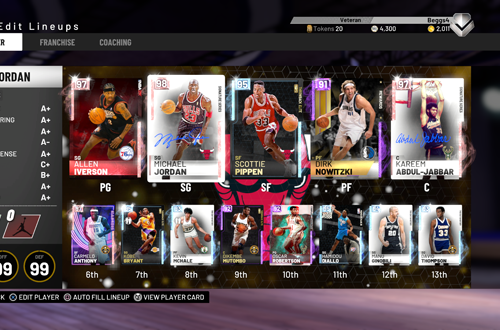 The card collecting/team building modes are an experience that I never thought that I’d be into. They struck me as fun ideas and important concepts for basketball games to feature and explore, but I was confident they weren’t for me. In hindsight, it’s an unusual thought given that I collected basketball trading cards back in the 90s, and was quite passionate about the hobby. Modes like Ultimate Team and MyTEAM actually put their virtual cards to use, blending the concepts of card collecting, fantasy sports, and basketball gaming. I’ve spent quite a bit of time with Ultimate Team in NBA Live, but I’ve had a tougher time getting into MyTEAM in NBA 2K.

This is something that I can attribute to a few factors. I’ve tried to seek out different experiences in NBA Live and NBA 2K, to cut down on repetition as I switch back and forth between games. Again, it’s the reason I haven’t done much with The One in NBA Live. I’ve also felt that Ultimate Team offered better pack rewards, such as guaranteed Legends in NBA Live 18. And of course, the focus on MyCAREER that’s kept me away from MyLEAGUE also stands in the way of playing MyTEAM. It’s unfortunate as Locker Codes have allowed me to build quite a good squad in NBA 2K19, so I’m hoping to spend more time with it before NBA 2K20 is released. 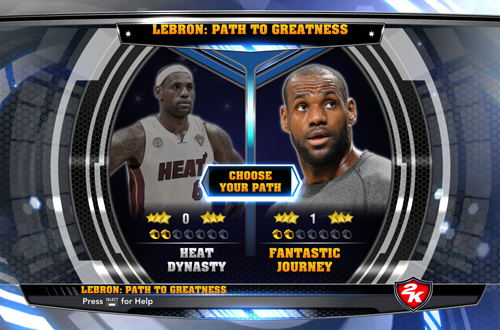 During the preview season for NBA 2K14, my fellow NLSC Podcast hosts and I were speculating on what kind of mode LeBron: Path to Greatness would be. We figured that it would be similar to The Jordan Challenge or NBA’s Greatest, spotlighting some of the most important games from LeBron James’ career. Alternatively, we figured it might be a LeBron-centric career mode. As it turned out, the mode was a speculative look ahead to the future. We were provided with two paths to greatness: sticking with the Miami Heat and creating a Dynasty, or going on a “Fantastic Journey” in which LeBron took his talents elsewhere. Each path consisted of various challenges.

Funnily enough, the Fantastic Journey in Path to Greatness ended up being prophetic. LeBron did leave Miami and return to Cleveland, and has since moved on to one of the league’s biggest markets (albeit Los Angeles rather than New York). It was a good year for predictions for 2K, as WWE 2K14 also predicted the end of The Undertaker’s Wrestlemania winning streak. At the time though, I was less than impressed with Path to Greatness. It felt like a gimmicky, pandering mode in a game I didn’t like as much as NBA 2K13. After revisiting it for Wayback Wednesday, I feel more positive about it to the point where I could actually see myself going back and playing through it. 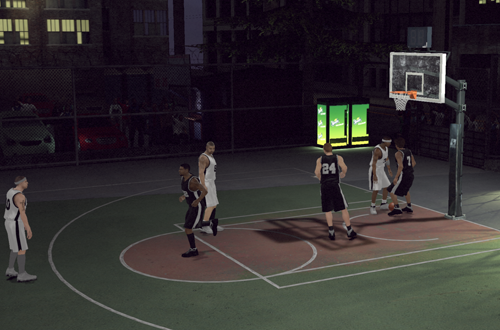 JaoSming, if you’re reading this, consider it my mea culpa for all the times we ribbed you about Blacktop, because I’m actually going to talk about the mode and give it its due! I’ll admit that I haven’t had much use for it over the years, and again, the fact that it took me a while to warm up to NBA 2K’s controls and get into the game made it a low priority on the list of game modes I wanted to play. There isn’t a great amount of depth to Blacktop, but you know what? It’s fun! I’ve never been as into the streetball scene as JaoSming, but having gone into Blacktop to get preview screenshots for a potential mod for NBA 2K11, I have to admit I stuck around to play out the full game.

It’s one of those modes that’ll never get a lot of attention moving forward, but at the same time, one that is absolutely worth having in NBA 2K because of how it can be a fun change of pace. I also have to say that it feels quite refreshing after experiencing The Playground in recent titles. It was nice to play a pickup game under streetball rules without a cheesy opponent spamming zigzag dribbles and abusing overpowered shooting Badges. Blacktop isn’t one of those modes that you can sink hours and hours into like the career and franchise experiences, but it deserves its due. I haven’t spent a lot of time with it, but I can see why our good friend JaoSming and many others have.

What are some of the modes in basketball video games that you haven’t spent a lot of time with, and would perhaps like to? Have your say in the comments section below, and as always, feel free to take the discussion to the NLSC Forum! That’s all for this week, so thanks for checking in, have a great weekend, and please join me again next Friday for another Five.

|| Blacktop isn’t one of those modes that you can sink hours and hours into like the career and franchise experiences, ||
Lies, blatant, lies.
https://www.youtube.com/watch?v=VsZ6mib5iY4

I probably spent more hours playing Blacktop in 2k10 than regular games. In 2k11 I also played Blacktop a lot, but from 2k12 to 2k14 I think that mode was in regress. Less options, no streetball moves (Or I can’t do them), no extra players and blocked roster, so you not able to choose the best players. Also details like jersey bug (the same which was in main menu), stupid global settings (IMO, 2k13 and 2k14). Good thing about Blacktop from 2k13 and 2k14 is that players are using club jerseys which gives better opportunities to mods.

That’s right, there were restrictions in later games. Were we able to get around that with roster editing?

Yes we were at least for PC.

That’s something at least. One of those weird changes that happens from time to time.

Wish Blacktop had an option to choose various courts across the world like in the PS2-era 2K’s. Since 2K17 it has been stuck at one court and made this mode nearly obsolete and unusable with no other options. Still I had fun with this game being able to pick any players for a dream match.

It’s definitely unfortunate that it’s lost some options and functionality.