The Friday Five: 5 Most Satisfying Mods to Make

Welcome to this week’s edition of The Friday Five! The Friday Five is a feature that I post every Friday in which I give my thoughts on a topic that’s related to NBA Live, NBA 2K, and other basketball video games, as well as the real NBA, and other areas of interest to our community. The feature is presented as either a list of five items, or in the form of a Top 5 countdown. This week’s Five is a list of five types of mods that I find the most satisfying to make.

Although the NBA season is on hold and March Madness has been cancelled, March Modness is still underway! We’re celebrating modding throughout the month of March with new releases, a spotlight on modding, and of course a giveaway as a means of saying thank you to our modding community. There’s still time to enter that giveaway, so if you’re interested, be sure to check out this post for details. The prize is a copy of either this year’s NBA 2K or NBA Live, though from the looks of things, it’ll probably be a Steam key for NBA 2K21 for the winner!

Of course, that doesn’t mean we can’t celebrate NBA Live modding, and release some new mods for old favourites. In fact, I’ve done just that, releasing fixed versions of my Hangar and NBA Elite 11 practice courts. There are a few other mods I’d like to finish and release this month, and I’m working towards getting that done. After all, modding can be a lot of fun, and it’s hard to resist the lure of the hobby. Most of us have a type of mod that we specialise in; updates that we find the most satisfying to make. I’ve been able to branch out with a few different types of mods over the years, and looking back, these five are the kind of updates I’ve found the most satisfaction in creating. 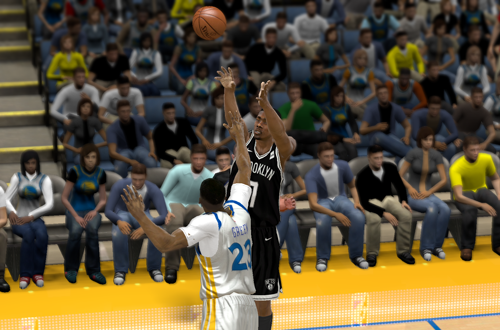 I’ll always have a fondness for current season rosters. They were the flagships mods of the NLSC when NBA Live was king, and my introduction to the hobby. They were a necessity for the current game in the days before official updates were the norm, and even today, there are community-made rosters that aim to fix ratings and enhance the gameplay. There’s something special about keeping a game updated beyond the year it’s set in, though. It’s why I’m working to finish my current roster for NBA 2K11, and why it’s hard to completely let go of the idea of making an update for some of the PC versions of NBA Live. Of course, the older a game, the more work that takes.

That is part of the fun though, and it’s very satisfying to see a current roster take shape and all come together. There’s something really entertaining about seeing new jerseys, courts, and logos in an older game, alongside the current players. Naturally there are limitations, from outdated audio we can’t modify to being stuck with certain rules and league formats that have changed in the interim. The novelty of being able to play an older favourite with new rosters generally outweighs the drawbacks, though. They take a lot of time to make, especially if you want to get everything as accurate as possible, but it all feels worth it when you can finally upload that updated roster file. 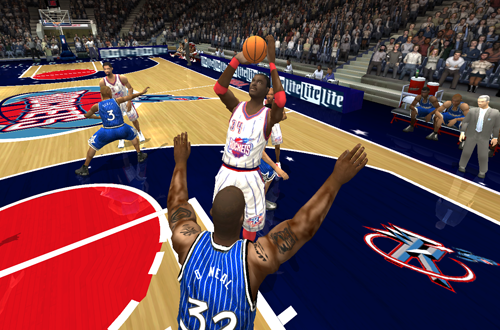 Just as it’s a novelty to play with new rosters in an old game, it’s a lot of fun to bring the past NBA into a more recent title. Not only is there the nostalgia of seeing those old players’ names again, but you can play with them in a game that’s technologically superior to the ones they originally appeared in. As such, retro season mods are very satisfying to make. They also have the benefit of being static. Whereas there’s always something new to account for in current rosters, retro mods cover a season that’s in the books already. They won’t get outdated as all the data is there and final, so you won’t be going back and revising your work because of a trade, signing, or injury.

The same goes for special rosters, such as assorted classic teams and Legends mods, fictional leagues, and other special projects. College mods are also more static than NBA rosters. On the other hand, these projects can be even more time-consuming, as they’ll often require a larger amount of custom art files. Making them compatible with current rosters and other concept mods can also be a huge undertaking. Like current roster updates, they can also fall victim to limitations such as unsuitable rules and formats, but it doesn’t stop them from being fun to make and play with. As I’ve said before, I can’t help thinking of all kinds of creative ideas for special roster projects! 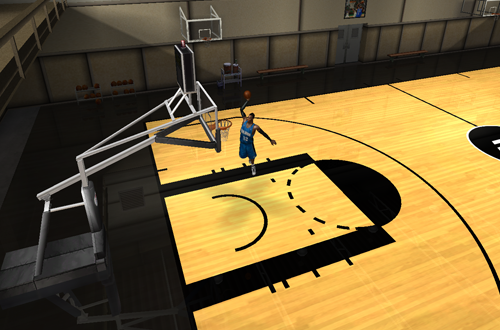 Having dabbled with court and jersey modding, I remain very impressed with the modders who can make such great updates for those aspects of the game. I’ve never quite been able to get the hang of editing jerseys, but I have managed to learn a thing or two about creating custom courts for NBA Live 2005 through 08. Although I have made a few courts for regular 5v5 gameplay, most of my updates have been practice courts. Inspired by Andreas Dahl’s amazing re-creation of The Temple in NBA Live 06, I tried my hand at creating The Hangar in NBA Live 08. It took some messing around and not everything is perfect, but to this day, I’m quite proud of the results.

I went on to create some other practice courts, including the NBA Elite 11 practice court, some team facilities based on photos that I could find, and a few other courts from newer games. I wouldn’t mind making some more 5v5 courts, but there is something I really enjoy about creating practice arenas. It feels more creative, and there’s a challenge in trying to replicate an arena like The Hangar in an older game. There’s also room to make all kinds of concept courts for practice mode; fun places to shoot around or play 1-on-1 in. It’s also quite different and more challenging than some of the other mods I’ve made, and it’s been satisfying to work it all out. 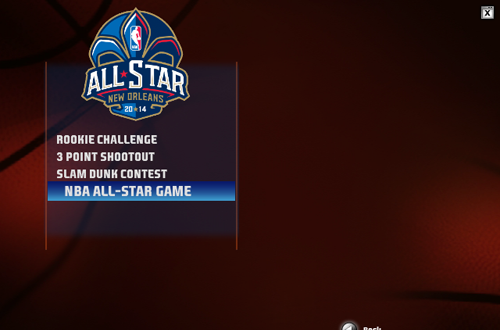 Art updates have never been my forte, and there are plenty that I’m not skilled enough to make. I can work with flat textures though, and in NBA Live PC, that covers a lot of the logo and presentation artwork. It was out of necessity that I made a logo update for the Philadelphia 76ers for the 2010 season. It seemed like a lot of our NBA Live modders were leaving those games behind, and I needed logo updates for the current rosters I was making. It was very satisfying to add some new skills to my repertoire, and not have to rely on anyone to create logos. It also gave me the confidence to try to branch out into creating other types of art mods, including the aforementioned courts.

I’ve also tried my hand at a few presentation mods, such as replacing the transitions with the ones seen on actual networks. I found a lot of satisfaction in tracking down the appropriate wipes and logos, and adding them to the games. It was also fun to discover that the transition files could be swapped between games, so if one particular network used an effect that was present in one game but not another, I could simply use that transition file for multiple titles. Art editing was a lot more accessible in NBA Live 2005 through NBA Live 08, and the compatibility of the files opened up many possibilities. It also streamlined the process of creating updates for multiple games. 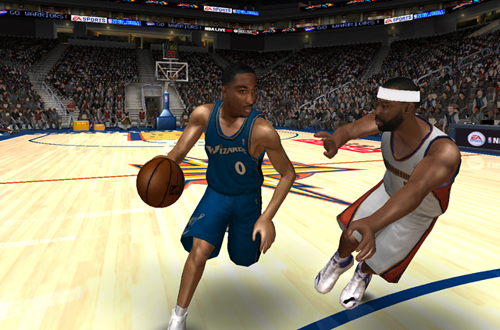 This isn’t meant to disparage the work we do in our modding community, but a lot of the projects that we make are essentially re-skinning the game. We do change up the experience by editing ratings, team strategies, and so forth, which does fix games to a certain extent of course, and creates new experiences. However, it’s rarer to develop a mod that truly enhances the game by fixing a problem or adding new functionality, at least compared to other genres of games that allow modding. It is possible though, and it’s satisfying when you can whip up a nifty fix or workaround that addresses a technical problem, rather than just changing art files or aspects of the roster.

Many of these fixes have been achieved by swapping in compatible files from other games in the series. Doing so has allowed us to add dunk and layup package previews back to the Create/Edit Player screen in NBA Live 08, restore access to Player Lock gameplay in the same game, replace the wonky net animation on dunks in NBA Live 06, and fix a handful of other issues. I’m particularly proud of a workaround I made for Instant Replay in NBA Live 06-08, to get cleaner screenshots. By making the “hide panel” button mouseover texture transparent, I fixed the issue of screens either having the full panel or that small button on them. It makes one feel very clever!

Modders, what are some of your favourite mods to make? Gamers, what are your favourite mods to download and enhance your game with? Let me know in the comments section below, and as always, feel free to take the discussion to the NLSC Forum! That’s all for this week, so thanks for checking in, have a great weekend, and please join me again next Friday for another Five.

Practice courts. I remember back in the day I mashup And1 Beach court with NBA Live 2000 practice court(kudos to authors of both courts!). I turned it from day to night, changed few textures. I’ve had a great fun with messing with that and result was fantastic at least for me.
With the last point, restoring of S5 presentation was a great example of things that we can do with mixing files from differents Live’s.

Glad to know I’m not the only one who likes practice courts. You’re definitely capable of things I’m not, though. 🙂

I’m was speaking about result, but didn’t show it. Here is how it look: https://imgur.com/a/lm3nkV7

Love it! Definitely takes me back.