Welcome to this week’s edition of The Friday Five! The Friday Five is a feature that I post every Friday in which I give my thoughts on a topic that’s related to NBA Live, NBA 2K, and other basketball video games, as well as the real NBA, and other areas of interest to our community. The feature is presented as either a list of five items, or in the form of a Top 5 countdown. This week’s Five is a list of five odd features that can be found in various Create-a-Player modes over the years.

One of the most basic staples of roster customisation in basketball games – and most sports games for that matter – is Create-a-Player. Whether you want to add a real player that’s missing from the official roster, insert your own avatar into the game, or spice things up with a fictional character, it’s there to indulge your creativity. Despite being a staple of roster editing, Create-a-Player has been missing from a few games, including NBA Live 14 through 16, and NBA Live 18 before a patch added it post-launch. Other than that, most games from the mid 90s onwards have included it.

Create-a-Player modes have usually offered a standard set of features as far as the ratings, bio data, and other attributes that can be assigned. As the graphics of hoops games have improved, so have the face creation tools. Generally speaking, apart from an option here and there for added depth, most 5v5 sim-oriented basketball titles have very similar Create-a-Player facilities. With that being said, there have been a few games with creation modes that have included some odd features and options, ranging from design choices and limitations to unexpected content. You know the drill: I’ve got five such examples to discuss, so let’s begin!

This one is admittedly a product of its era, when consoles such as the Nintendo 64 and original PlayStation didn’t offer large storage solutions for user data such as saved games and rosters. All the same, it stands out as a bit unusual, so it’s worth including on a list of Create-a-Player oddities. The Nintendo 64 and PlayStation versions of NBA Live 99 and NBA Live 2000 had a very limited number of Create-a-Player slots; usually 40 on PS1, and between 10 and 20 on N64. All basketball games have had a limit on the number of new players that can be created, but those versions of NBA Live forced gamers to ration those slots if they wanted to edit any original players.

You see, if you wanted to edit an original player, the game generated a “created” version that replaced them in the roster. This took up one of the Create-a-Player slots, which meant one less new player that could be added to the roster. As such, if you wanted to update a game’s rosters – which were always going to be outdated by its release – you needed to choose between adding a missing player, or giving up a slot so that you could fix any incorrect jersey numbers and ratings. Roster editing on console was always limited compared to PC anyway, but it was still frustrating. Even more annoying, you couldn’t even use that method to change the name of Roster Players! 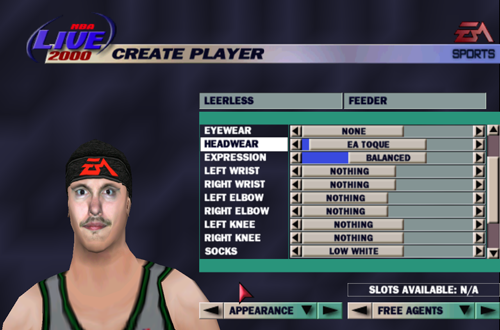 It’s amazing how memories can be jogged. I was watching an interview with Cobie Smulders of How I Met Your Mother fame on Conan, and while discussing Canadian slang, Conan brought up the word “toque” (also spelled “tuque”). As Canadian readers know, it refers to a knitted hat or watch cap; what an Australian like me would call a “beanie”. It led to a moment of retroactive recognition in the Create-a-Player modes of NBA Live 99 and NBA Live 2000, where it was possible to assign a player a toque as an accessory. In addition to a plain toque, there was also an EA toque that featured the company logo on the front. After all these years, an unfamiliar word made sense!

So, apart from the fact I was unfamiliar with a word that a Canadian development team would be inclined to use, what’s so odd about it? Well, while one might certainly wear a toque when playing streetball – and you can indeed outfit your MyPLAYER with one in NBA 2K’s Neighborhood – it’s highly unlikely to be worn in an indoor setting, particularly by an NBA player. At the end of the day it was a just-for-fun extra in Create-a-Player; a concept that has fallen by the wayside as the years have gone by, except of course in MyCAREER’s connected modes where cosmetic items have become a big part of the experience. It’s fun to see in those old games, though. 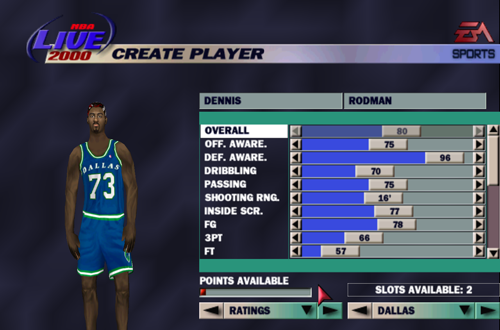 Looking back, it seems most of the odd Create-a-Player features could be found in games released in this era! As noted, it was possible to give your created player a toque in NBA Live 2000 PC, should you feel the need to make a fashion statement. Something that you couldn’t do, however, was to max out all of their ratings at 99. Created players had a limited number of ratings points that you could assign, which forced your custom creations to have relatively balanced and realistic ratings. Within the NBA Live series, it’s a feature that’s unique to NBA Live 2000’s Create-a-Player, and I don’t believe many (if any) other sim games enforced similar ratings limits.

Games like NBA Hangtime where you could create and level up a player had limits, and obviously the career modes in modern games have featured various ratings caps. There’s usually nothing preventing you from making a maxed-out super player in the traditional Create-a-Player mode, though. On one hand, NBA Live 2000’s limit is a good idea. It discourages cheating your way to victory by creating a bunch of cheesy players, while encouraging realism and balance. On the other hand, it did take a fun activity out of the game, and could get in the way of custom roster projects that involved legendary players. It’s not altogether surprising that the idea was dropped. 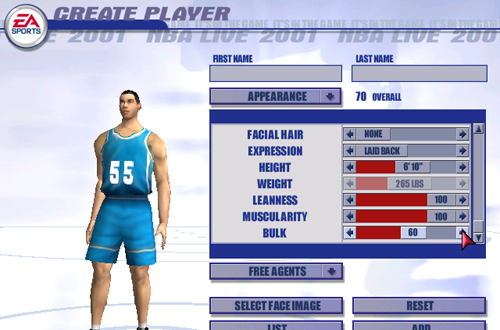 There may not have been a ratings limit in NBA Live 2001’s Create-a-Player, but it did feature another odd restriction. Instead of being able to manually select the weight of a created player, we had to juggle three sliders that also determined their body shape and muscle tone in order to get the weight we wanted. The idea was that every player would have a realistic body model that also resulted in them being a specific weight. In theory it was an interesting and creative idea, allowing a great deal of control over a player’s body shape and muscularity, resulting in accurate proportions given the weight they were officially listed at. It certainly makes sense in that context.

In practice, however, it didn’t work out as well. As it turned out, not every player’s listed weight resulted in a body shape that NBA Live 2001’s Create-a-Player system saw as appropriate. Instead of just being able to choose a player’s weight as easily as their height, getting the desired number became a delicate balancing act that all too often resulted in sacrificing accuracy in the listed weight or body shape. Depending on the roster project, this meant a lot more messing around for frequently undesirable results. Fortunately, on PC we could just change weights in the database, but console users were out of luck. All in all, it was an interesting idea that wasn’t well-executed. 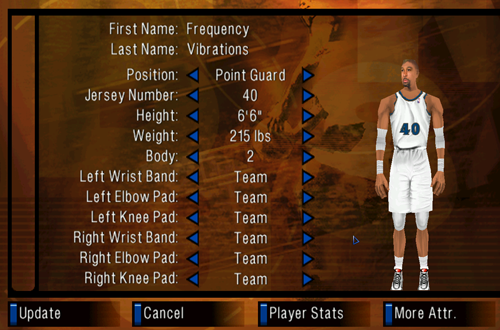 When I covered Fox Sports NBA Basketball 2000 in a retrospective for Wayback Wednesday, I mentioned how it’s a game that had some good ideas, but also made the wrong choice at seemingly every turn as far as implementing them. As you can no doubt gather from its inclusion on this list, its Create-a-Player function wasn’t exempt from such oddities. Putting aside that the separate Edit Player mode is actually for modifying created players and not original ones – as that name usually implies – the navigation in Create-a-Player is one of the most confusing you’ll find in a basketball game. Of course, that goes for most menus in Fox Sports NBA Basketball 2000.

Here’s how I broke it down in my retrospective: “Toggling between bio data and different attributes is clunky, with oddly labelled buttons that only appear if you’ve toggled to the appropriate screen. It’s a bit hard to describe but basically, the first screen with a player’s ratings (all nine of them!) is the Player Stats screen, while the Attributes screen includes height, weight, and accessories. “More Attributes” now toggles between the bio data and facial customisation options, while the Player Stats button now replaces the one labelled Attributes.” In short, it’s got all of the standard Create-a-Player features, but they’re implemented in the oddest way possible.

Do you remember some of these odd Create-a-Player features and functions? What are some others that you can recall? Let me know in the comments below, and as always, feel free to take the discussion to the NLSC Forum! That’s all for this week, so thanks for checking in, have a great weekend, and please join me again next Friday for another Five.

Toque wasn’t the only oddity in Live 2000, remember Star Trek goggles and others? Another oddity was not able to edit accesories for players (In Live 2003 you can do limbs but can’t edit a “head” section).

Limited ratings in Live 2000 was awful, I remember trying to recreate Dream Team but there is no Drexler in a game so I needed to create him by myself, I’ve had Champs Roster by Lutz van Hasselt with 95 Rockets so I decided to take ratings from it. I was so frustrated when at the end I was out of the ratings points and not able to made Drexler correctly thanks to those limits.

I don’t remember any weird goggles, but it’s a good excuse to take another look and check for them!

A lack of headband editing usually indicates that the shape files can’t handle headbands being put on everyone, without them clipping through hair (or the entire head) on some players. It’s definitely annoying, but I do understand the reasoning there.

The ratings limit was absolutely a chore for projects like that. Thankfully those games were so easy to edit externally!