Welcome to this week’s edition of The Friday Five! The Friday Five is a feature that I post every Friday in which I give my thoughts on a topic that’s related to NBA Live, NBA 2K, and other basketball video games, as well as the real NBA, and other areas of interest to our community. The feature is presented as either a list of five items, or in the form of a Top 5 countdown. This week’s Five is a list of five odd mistakes that could be found in old basketball games.

Authenticity is the name of the game, especially for sim titles. Over the years, eagle-eyed hoops gamers have proven adept at spotting mistakes, big or small. Whether it’s an inaccuracy in a court or jersey, a rating that is way off, or some other error, you can be sure that someone with an eye for detail will point it out. Some mistakes are easy to fix ourselves, while others require some modding skill (and for that matter, a game that is easily moddable). Official updates have also become far more detailed over the years, correcting many minor (and sometimes major) mistakes post-release.

As for why these mistakes occur, the simple answer is that the developers are human, and it’s easy to overlook a detail here and there. There are also times when mistakes and inaccuracies are the result of technical limitations, licensing issues, or some other factor. With that in mind, it’s no surprise that older hoops games have featured some odd mistakes through the years. We still see inaccuracies in modern games, many of which are addressed by official updates, but they’re generally not as weird and quirky as the mistakes in old titles. Here are five of my picks for the oddest mistakes that we’ve seen in various classic basketball video games. 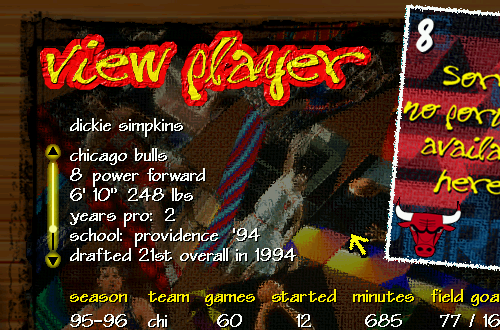 Being a Chicago Bulls fan since the 90s, I naturally remember three-time champion Dickey Simpkins. I even remembered that he was traded for Scott Burrell prior to the 1998 season, and then reacquired halfway through the year, allowing him to be a part of the second threepeat. I also remember that in the early NBA Live games, his name was incorrectly spelled as “Dickie” Simpkins. Despite the fact that the proper spelling could be found on basketball trading cards from that era – I’ve gone back and double-checked that – the misspelling from NBA Live has stuck with me. To that end, I’ve erroneously used it myself in the creation of retro mods, as well as Forum discussions.

I’m guessing it’s one of those mistakes that also made its way into some official roster listings that EA Sports were working from. Interestingly, the error was corrected in NBA Live 98 onwards, but another oddity with Simpkins that did continue was his nickname, which was listed as “Skeeter/Hawk”. That wasn’t his nickname, but Pete Myers – a teammate of Dickey’s in 1995 – was nicknamed “Skeeter Hawk”. In fact, Myers does actually have the (incorrectly written) nickname of “Skeeter/Hawk” in earlier games, but somehow, Simpkins ended up with it as well later on. It’s odd that Simpkins ended up having two mistakes related to his name in multiple video games.

2. Jersey Numbers for the Chicago Bulls 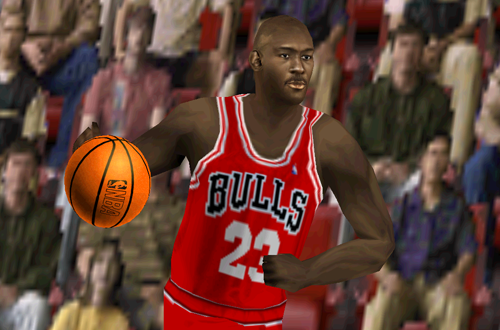 I was reminded of this error when I captured the above screenshot from NBA Live 2000 for my Wayback Wednesday feature on running with the early 2000s Chicago Bulls in games. Incorrect numbers on the Bulls’ jerseys was one of those mistakes that showed up in a lot of games from around that time, though EA Sports would correct it the following year in NBA Live 2001. The white numbers, which of course should be black with a white outline, stick out like a sore thumb. Meanwhile, the name on the back is black, but lacks the white outline. They make the jersey look like one of those cheap bootlegs that quite a few people had back then, and sometimes pop up on eBay.

As pepis21 noted in a comment on that feature, it’s quite a big mistake given that the Bulls jersey is rather iconic, due to their success and Michael Jordan’s popularity in the 90s. It’s also puzzling because other teams’ jerseys did have correct numbers, but somehow the Bulls – again, one of the most popular and watched teams of the era – featured prominent mistakes on theirs. From memory, it was one of the first things that jersey modders would correct in their updates, and for good reason. It’s odd that it was an error that still showed up well into the 3D era. As the accuracy of other jersey numbers demonstrated, it’s not as though it was due to technical limitations. 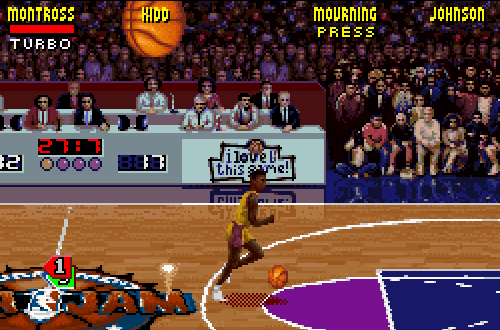 The original NBA Jam and its sequel, NBA Jam Tournament Edition, are undisputed classics. With that being said, they do have their share of odd mistakes. Earlier this year, I noted that Kevin Edwards has Blue Edwards’ portrait in the PC version of NBA Jam TE, an error I’d overlooked for more than twenty years (and one that isn’t present in the console or arcade versions). The console release had issues of its own, as Jason Kidd’s skin tone was too dark, and his player model too tall. Due to a trade that was rescinded, at least one arcade revision has Robert Horry and Sean Elliott swapped, though they still have each other’s portraits and even their original jerseys.

A lot of ratings are also unusual, particularly in TE where Juwan Howard and Dino Radja are great three-point shooters, Stacey Augmon is rated low in steals, and a few players in general are just too good or too weak overall. As Tim Kitzrow explained in our interview though, the developers didn’t always have a lot of info about players in smaller markets, leaving them to make guesses for – and possibly artificially balance – certain players’ ratings. Players with dunk ratings of zero can also still dunk, contrary to info given on the tips screen. Of course, that may have been by design to make the game more fun, a change that retroactively makes the tips screen the mistake instead. 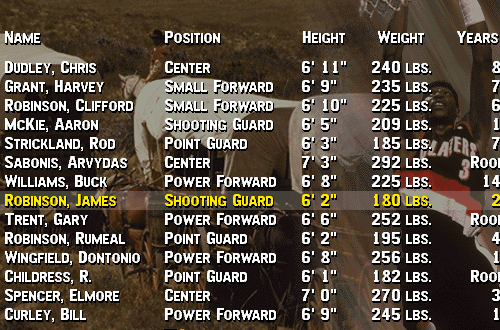 It wasn’t just Midway that had difficulty getting their hands on sufficient resources back in the day. The sim games tended to be accurate when it came to players’ ratings, but there were mistakes with their bio data, notably their positions. There weren’t any egregious mistakes such as Shaquille O’Neal being a point guard or Muggsy Bogues being a centre, but when it came to slotting certain players in at the right forward or guard spot, there were errors. Without a secondary position or the ability to change positions for original players, this led to logjams when teams were stacked with too many players at one position, or teams featuring otherwise inaccurate rotations.

Some examples can be found on the Portland Trail Blazers in NBA Live 96, who have a logjam at power forward; at least one of them, Dontonio Wingfield, was actually a small forward. They also have James Robinson, a point guard who always seemed to be listed as a shooting guard. Brian Shaw, Mario Elie, Terry Dehere, Dee Brown, and George McCloud were also often listed with the incorrect position, though to be fair it was usually their secondary position. The lack of reliable resources in turn made old games unreliable resources when we referenced them for retro mods. Indeed, I ended up duplicating some of NBA Live 96’s mistakes in 1996 season mods for later games. 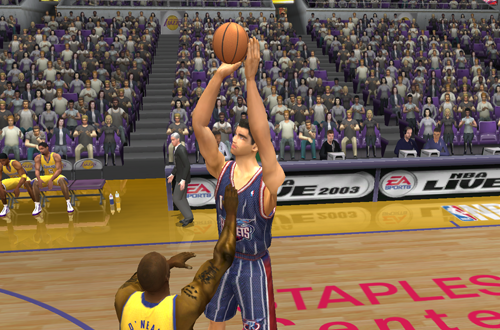 Once again, there has been a bunch of weird ratings over the years, with a number of players who have been overrated or underrated overall. However, one of the recurring mistakes that I always remember is Yao Ming’s three-point abilities in various games. As I’ve previously noted, Yao’s three-point rating in NBA Live 2003 was 76, a very generous mark for a 7’6″ centre who went 1-for-2 from beyond the arc in his rookie season. Subsequent games had him in the 30s, though he was bumped back up to 50 in NBA Live 07 and NBA Live 08. In reality, Yao would finish his career with two three-pointers out of a total of ten attempts, making those ratings puzzling mistakes.

Perhaps they were meant to indicate that he did have a respectable shooting touch and could’ve possibly developed a three-point game – in today’s NBA, he likely would’ve – and give gamers the opportunity to knock down the occasional trey with him. All the same, it was a recurring mistake to overrate him in three-pointers, when he was no more of a threat than any of the old school bigs who made a few threes throughout their career. It’s also odd in that by the time Yao Ming came along, there was a point of emphasis on ratings players correctly, and plenty of readily available resources to check their stats. To me, that’s what makes it stand out from other ratings mistakes.

Can you think of any other odd mistakes that you’ve encountered in older basketball games? For that matter, can you recall any from more recent games that didn’t end up getting fixed? Let me know in the comments below, and as always, feel free to take the discussion to the NLSC Forum! That’s all for this week, so thanks for checking in, have a great weekend, and please join me again next Friday for another Five.