Welcome to this week’s edition of The Friday Five! The Friday Five is a feature that I post every Friday in which I give my thoughts on a topic that’s related to NBA Live, NBA 2K, and other basketball video games, as well as the real NBA, and other areas of interest to our community. The feature is presented as either a list of five items, or in the form of a Top 5 countdown. This week’s Five is a list of five outdated details in basketball games.

It’s difficult for basketball video games not to include a few outdated details at launch. Roster cut-off dates mean that a game’s lineups will be at least slightly out of date by the time we get our hands on it. Obviously all games are eventually outdated as new players enter the league, returning players change teams, and teams introduce new branding. Mind you, it would be a rather short and uninteresting article if I simply said all hoops games have outdated details and left it at that. It would make for a decent April Fools gag, though.

Since April 1st has been and gone this year, and fell on a Wednesday besides, I’ll go ahead and compile a proper list. I will however avoid including any outdated details related to rosters since as I noted they’re inevitable, and often fixed through official updates. I’m also excluding old games that launched with previous season rosters, as well as lockout-affected titles. Instead, I’m focusing on other outdated details that were noteworthy at release, or in some cases, details that quickly became outdated due to events that occurred post-launch. They’re not necessarily game-breaking issues, of course, but they nevertheless stand out as interesting trivia notes. 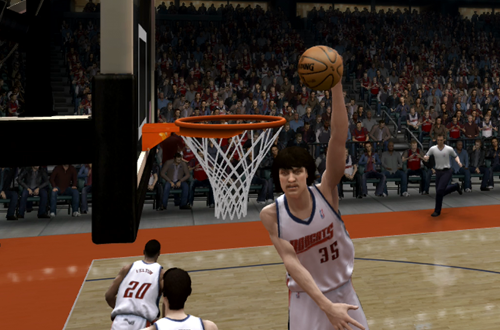 When it comes to branding changes, basketball game developers are given an early glimpse at what to expect for the upcoming season. It was especially important that they were given these assets ahead of time in the days before art updates were easy to push through, otherwise a game would launch with several outdated details. The NBA was set to debut a new synthetic basketball for the 2007 season, which was unveiled at the 2006 Draft. It basically leaked ahead of time via a preview of NBA Live 07 that we were all asked to pull, because the included screenshots showed the new design. Once the official announcement was made, new screenshots got the green light.

That new ball was roundly criticised by the players, and David Stern took heat not only for introducing the new ball without their approval, but for also dismissing their criticisms of it. The NBA would ultimately bring back the old leather basketballs, a decision that was generally popular. Of course, this now meant that the new design in NBA Live 07 that had originally been a potential spoiler was now in fact outdated. On PC, we were able to create mods that updated the ball, but the console versions didn’t receive any updates, official or unofficial. I’ve often said that basketball games serve as time capsules, and NBA Live 07 captures that unpopular new design to this day. 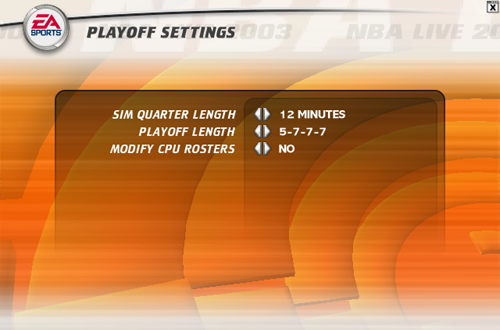 Although there have been a few changes to the way the NBA Playoffs are seeded over the past fifteen years or so, the general format and number of games in each round has remained the same since 2003, when the league adopted the 7-7-7-7 format. The old 5-7-7-7 format had been in effect since 1984, when the league expanded the Playoffs to include sixteen teams, and changed the first round from best-of-3 to best of-5. The change infamously led to a gaffe by Tracy McGrady, who expressed his delight at finally making it to the second round after his Orlando Magic went up 3 games to 1 on the Detroit Pistons, only for Detroit to come storming back and win the series in 7.

Virtual T-Mac wouldn’t have had the same problem in NBA Live 2003, though. As the change wasn’t made official until after NBA Live 2003 went gold, it retained the old 5-7-7-7 format, and thus appeared outdated. These days, such a change might be able to be patched in post-release, but back then, we just had to roll with outdated details like that. It’s the only item on this list that really impacted the experience, as the rest are cosmetic details that are mostly trivial in the grand scheme of things. It’s just the way things worked with the technology of the time though, and fortunately the Playoffs format would be updated in NBA Live 2004 and beyond. 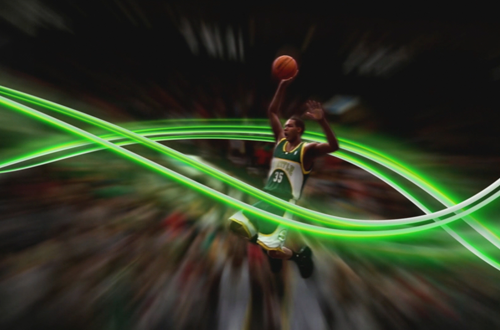 The Seattle SuperSonics’ relocation to Oklahoma City and transformation into the Thunder was both controversial and abrupt. As I’ve discussed in previous articles, including an in-depth Wayback Wednesday piece, NBA Live 09 ultimately launched without updated branding for the Thunder. There was nothing that could be done for the PlayStation 2 release, but the Xbox 360 and PlayStation 3 versions received free downloadable content that added the Thunder’s logo, jerseys, and court. It’s rather odd as there were pre-release screenshots of NBA Live 09 that showed off the team’s new branding, but for whatever reason, the game was released with the placeholder art.

Even though the Sonics were no more after the 2008 season, they did make a quick cameo in NBA Live 09. Reigning Rookie of the Year Kevin Durant appears in the attract mode video, throwing down a dunk. However, he isn’t wearing the uniform of the Thunder, or the black and white placeholder jersey of the base game. He’s still sporting the green and gold jersey of the Sonics as he soars to the rim for the slam. As far as outdated details are concerned, this one is fairly inconsequential. It is noticeable all the same, and once again, it underscores the abruptness of the Sonics’ move. It also suggests that the attract mode video uses some footage from an outdated build. 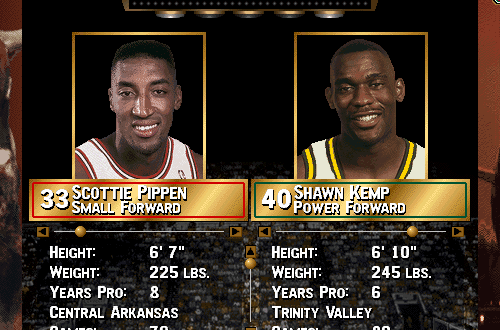 Outdated portraits aren’t terribly unusual in most basketball games. Several players change teams in the offseason, and games often have to be finalised before media day takes place. Modern games have the advantages of using renders and pushing through updated portraits, but older games were stuck with the portraits they launched with; putting aside the possibility of modding, of course. However, the portraits in NBA Live 96 PC are an interesting case. Many of them have been recycled from NBA Live 95 PC, which in turn used portraits taken for the 1994 season or earlier. This means that several portraits in NBA Live 96 PC are at least a couple of seasons out of date.

This is why Horace Grant is still wearing a Chicago Bulls portrait in his jersey, even though he was coming off his first year with the Orlando Magic. Clyde Drexler and Otis Thorpe are still wearing their Portland Trail Blazers and Houston Rockets jerseys respectively. It hardly ruins the game – just having proper photos rather than digitised ones was a big deal – but it stands out once you notice it. As an added bit of trivia, when a friend gave me some of their old basketball cards a few years later, I noticed that the same portraits appeared on the backs of the 1994 NBA Hoops series by SkyBox. It was cool to discover, after first glimpsing them in NBA Live 96 PC.

5. DVD-ROM Covers in MyCAREER on PC 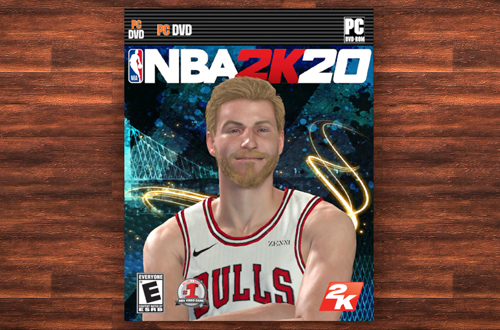 Endorsements are a nice touch in NBA 2K’s MyCAREER. Not only are they a means of earning extra VC, but they add to the immersion of the experience. As you’ll know if you’ve played a lot of MyCAREER, and as you probably won’t be surprised to hear if you haven’t, one of the endorsements you can earn is the cover of the next NBA 2K title. Earning this endorsement not only nets you VC, but generates an image where your player appears on the cover art for the game. It’s something that’s been in the mode for years, and if you invest your time in becoming an NBA superstar, it’s one you’re bound to get in your rookie season. At least, I’ve always done so.

Anyway, the cover art that you’ll see when you get the endorsement differs according to the platform you’re playing on. On PlayStation 4 it will resemble a PS4 case, while on Xbox One the cover will be framed with X1 branding. Interestingly, in the PC version, it will display the old PC DVD/DVD-ROM artwork that was common in the late 2000s. That alone would already make it an outdated detail, but on top of that, NBA 2K PC isn’t even released on DVD-ROM anymore; it’s exclusively available digitally through Steam. I’m not sure if it’s an issue with Valve’s trademarks, an oversight, or purely creative license, but it is rather entertaining to see in any event.

Can you think of any other outdated details like this that were never fixed? Do you remember noticing any of the ones that I mentioned? Let me know in the comments below, and as always, feel free to take the discussion to the NLSC Forum! That’s all for this week, so thanks for checking in, have a great weekend, and please join me again next Friday for another Five.

I was thinking about this ball from 06/07 and I’m pretty sure if they do the same thing today no one would complain, because of one simple reason, except NBA and FIBA competitions + few league (like Polish, but it’s minority anyway) no one use genuine leather balls (from what I know only Spalding and Molten still produce them) anymore. Now everyone use synthetics from High-School to NCAA, so most of current players got their first touch with Leather ball in NBA which means they would be used to composite.

That’s a good point. Unless they did something weird with the grip or something, it’d probably be better-received. I imagine they’d probably do more extensive testing and let the players know in advance these days, too. That was the big controversy, that the players weren’t consulted beforehand. That and Stern implying that they didn’t know what they were talking about with their criticisms.

That’s a good point too. I know cross traxion was tested during 2006 All Star Game, but that’s only one weekend.
Actually I could understand players complains, I’ve played TF-1000 (which was probably use as a base for NBA ball) from that period and it had stiff cover compare to current version which is much softer.
NBA and Spalding took a risk and pay the price, on the other hand WNBA stayed with composite ball.

Change is never universally popular, especially when it’s sprung on people and their complaints aren’t taken seriously. It’ll be interesting to see if it does come back. If so, maybe NBA Live 07 will be retroactively updated again!

Some things that bothers me when playing older games are the presentations were dated horribly notably the commentary and crowd chants, especially when modded with new season.

Well, as I said, all games are outdated eventually, and there’s definitely only so much you can do with modding. Can you remember any crowd sounds or commentary that was outdated at launch? I can’t recall any off the top of my head, but they’d be interesting examples if there are any.