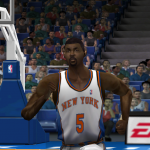 Welcome to another edition of The Friday Five! Every Friday I cover a topic related to basketball gaming, either as a list of five items, or a Top 5 countdown. The topics for these lists and countdowns include everything from fun facts and recollections to commentary and critique. This week’s Five is Part 5 in an ongoing series listing players that appeared in more video games than actual NBA games.

Due to the interactive almanac aspect of basketball video games – yes, there’s that phrase again – they’re a great way of remembering players long after they’ve retired. If you spent a lot of time poring over the rosters in old games, either while modding or perhaps playing a franchise game, you might even find that you’re able to recall the names of benchwarmers from years ago, without even firing up those titles. Even if you can’t recall them off the top of your head, once you dust off an old game and start browsing the rosters, even the most obscure names will likely come back to you.

Indeed, you’ll probably only recall some of the most obscure names because of the time you spent on the virtual hardwood. As is evident by this being the fifth article covering this topic, there are a number of players who made their way into the official rosters of video games despite never actually playing in the NBA. If you follow the NCAA or foreign leagues, some of these players may be familiar due to their stints and accomplishments elsewhere. Most of us probably remember them as names in the Free Agents Pool, or on the deep bench in the default rosters. Those players do have some interesting stories though, especially when they end up being in multiple titles. 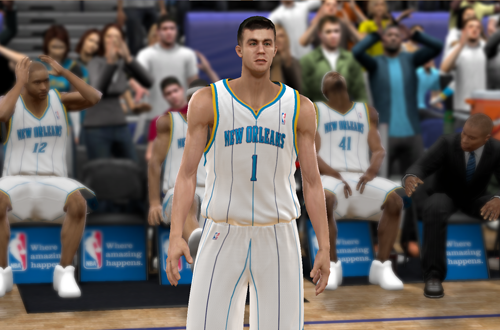 When I began this series of articles on players that have appeared in more video games than real NBA games, there were a couple of names that had more than one virtual hardwood appearance despite never officially tallying a single minute. The more research I’ve done for subsequent instalments, the more players I’ve found that somehow managed to appear in multiple games despite never actually playing in the NBA. Jared Jordan is a perfect example of that, as I’ve found him in the rosters of at least four games: NBA Live 10, NBA 2K9, NBA 2K10, and NBA 2K11. It represents how close he came to making it to the NBA during the late 2000s and early 2010s.

Born just a couple of days before me in 1984 – and yes, talking about now-retired players who are my age does make me feel old – Jordan was drafted by the Clippers with the 45th pick in 2007. After playing for the Clippers in the Summer League, he spent the year in Lithuania. For the next few years, he latched on with NBA teams for Summer League and training camp stints, including the Hornets in 2008, and then the Warriors in 2009. He also came close to playing for the Knicks in 2007 as they even released Dan Dickau in favour of him, before ultimately cutting him as well. While an NBA career never came to be, his attempts saw him included in multiple video games. 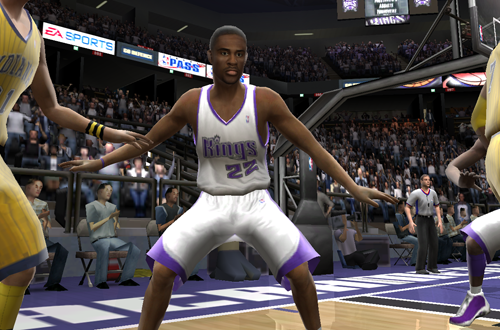 A second round pick of the Sacramento Kings in 2004 – Kevin Martin was their first round pick in that Draft – Ricky Minard didn’t play a single game in the NBA before he was cut in November. He had been signed to his rookie contract in time to be included in NBA Live 2005 and ESPN NBA 2K5 however, where he can be found on the Kings’ roster. In that respect, he’s like many other players that I’ve profiled in this series. Players drafted in the second round don’t have guaranteed contracts, so it’s not uncommon for them to be signed and subsequently included in games, only to be cut by the time the games come out (and possibly not ever make it back to the league).

What’s interesting about Minard is that he also appears in the Free Agents Pool in NBA 2K6 and NBA 2K7. Again, this isn’t unheard of, as the timing of signings and releases can leave players licensed for inclusion, but unsigned by the roster cut-off date. It’s certainly helpful to have those extra players in the game as Free Agents. The odd part of Minard being in NBA 2K6 and NBA 2K7 is that according to Basketball Reference, Wikipedia, and his RealGM profile, he didn’t sign any NBA contracts after the Kings released him. I imagine it was all above board, but whatever the particulars, it resulted in several video game appearances without ever playing in the NBA. 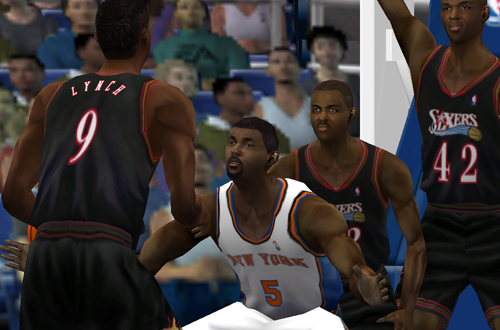 Drafted by Dallas with the 58th and final pick in 2000, Pete Mickeal was released during the Mavericks’ training camp, but later signed with the New York Knicks. He spent his entire Knicks tenure on the injured list before being released, but the later release date for NBA Live 2001 PC placed him on the virtual hardwood before he was cut loose. Although he had a successful run in the ABA and a lengthy career overseas, Mickael’s attempts at an NBA return fell short despite appearances in the Summer League. After retiring in 2017, he’s been a scout for the Minnesota Timberwolves, and is currently serving as the president of the Myrtle Beach International Combine.

Although he never had a second stint in the NBA, Mickael’s inclusion in NBA Live 2001 wasn’t the last time that he appeared in a video game. With the brief addition of Euroleague teams in NBA 2K, he also appears in NBA 2K14 on Barcelona’s roster. It makes him one of a few names that I remember from old releases to appear in newer titles thanks to the inclusion of the Euroleague squads. Ironically, another player who can be found on Euroleague teams in NBA 2K14 – Andy Panko – did actually play in the 2001 season, but didn’t appear in NBA Live 2001 or any other 2001 games. You know you’ve spent a lot of time making rosters when these names jump out at you! 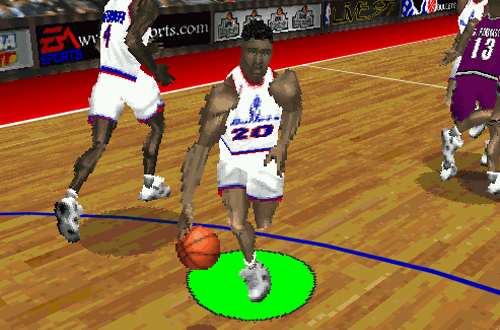 There are a couple of ways that I research players for this topic. Sometimes I’ll see an unfamiliar name in an old game, and look them up. Other times it’ll be the reverse. I’ll go looking back through Draft results and find players that are noted as never having played in the NBA, and then go searching for them in games they could’ve feasibly been in. Ronnie Henderson is an example of the latter. Upon seeing his name among the 1996 Draftees and noticing that he never played in the NBA, I went back to the 1997 season releases. Sure enough, NBA Live 97 included him on the Washington Bullets, the team that drafted the 6’4″ guard out of LSU with the 55th Overall pick.

At LSU, Henderson was half of a formidable backcourt duo with Randy Livingston, a fellow second round pick in 1996 that I’m guessing basketball fans/gamers my age do remember. Livingston went on to have an 11 year NBA career, though his 203 games are a record low among players who were in the league for that long. Of course, that’s still 203 more games than Henderson played, as the two-time SEC scoring leader did not get another shot at the NBA after the Bullets released him in October 1996. As with the other players listed here, it was a long enough stint for inclusion in an NBA video game. That’s more than some players who did make the league can actually say! 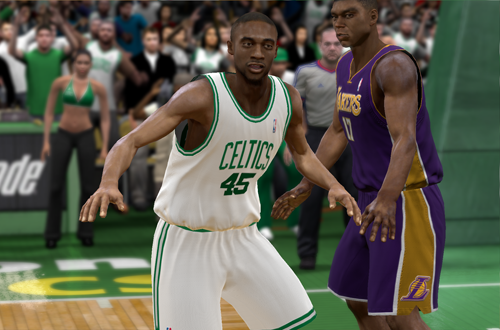 Like Ricky Minard, Brandon Wallace’s appearance in multiple games despite never playing in the league is somewhat unusual. As noted, Minard continued to appear as a free agent even though he didn’t sign any further NBA contracts. This is in contrast to someone like Jared Jordan, whose appearances on the virtual hardwood line up with his various Summer League and training camp stints that fell just short of an official NBA debut. Wallace went undrafted when he left college as a senior in 2007, but was signed by the Celtics and beat out veteran Dahntay Jones and fellow rookie Jackie Manuel for a roster spot. However, he was cut in December before he played a game.

After that, Wallace played in the D-League and overseas, but according to all of the usual sources – Basketball Reference, RealGM, and Wikipedia – he didn’t join an NBA roster from the time the Celtics released him to when he retired in 2013. As such, one wouldn’t expect the producers working on NBA 2K’s rosters to be able to add him, let alone have reason to. Nevertheless, he’s in the rosters of NBA 2K9, NBA 2K10, and NBA 2K11. RealGM does mention a multi-year contract, so I imagine he was left in the game just in case, until he was no longer contractually able to appear. If you’re looking for a player to overwrite in roster mods, he’s a prime candidate.

Do you remember any of these players, either in their video game or their non-NBA appearances? Who are some other players that you recall that I haven’t mentioned yet? Let me know in the comments, and as always, feel free to take the discussion to the NLSC Forum! That’s all for this week, so thanks for checking in, have a great weekend, and please join me again next Friday for another Five.